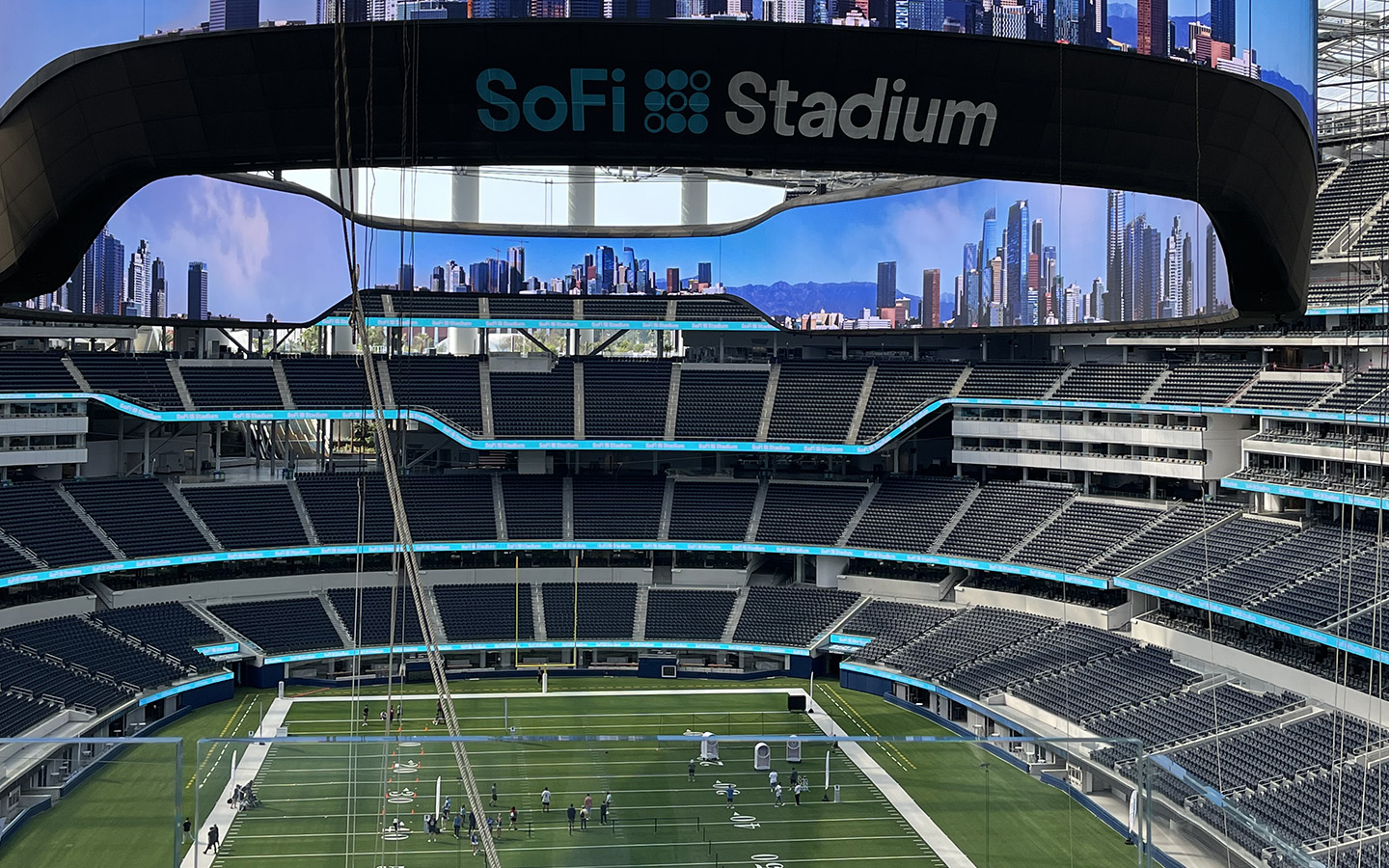 Local and state officials launched an anti-human trafficking campaign at Los Angeles International Airport on Tuesday to raise awareness ahead of the Super Bowl – which, like other major events, is susceptible to high levels human trafficking and sex.

The airport has installed signs on its digital screens and in all 460 airport restrooms to share resources with people who want to report suspected cases of human trafficking and abuse before, during and after the Super Bowl. of February 13.

“Big events, such as the Super Bowl, can lead to an increase in human trafficking cases due to a high influx of visitors,” It’s A Penalty says on its website. “And when it comes to the prevalence of commercial sex industries, California is particularly vulnerable because of its proximity to international borders, number of ports and airports, large immigrant population, and large economy that includes industries that attract forced labour.”

On Tuesday, Sarah de Carvalho, CEO of It’s A Penalty, launched the campaign at LAX with California Attorney General Rob Bonta and LA City Council Speaker Nury Martinez, along with representatives from the airport, the Los Angeles Board of Airport Commissioners, Uber, Airbnb, American Airlines, A21, and the American Institute Against Human Trafficking.

“The It’s a Penalty campaign, along with our partners, will help prevent human trafficking and exploitation before and during Super Bowl LV1, contributing to a positive legacy in the host city of Los Angeles and beyond,” de Carvalho mentioned. “We know from previous campaigns how impactful they can be. Last year, our biggest campaign was during the Super Bowl in Tampa, which reported that 84% of people felt more aware of issues of human trafficking and exploitation, and more equipped to make a report after being exposed to the It’s a Penalty campaign. ”

Uber is participating in the campaign by displaying the national human trafficking hotline, 1-888-373-7888 and a local reporting hotline on 2,500 of its vehicles. American Airlines and Southwest Airlines will screen an in-flight film on board its January and February flights to raise awareness as well.

The campaign also sent posters and pens to Los Angeles-area Hilton, IHG and Motel 6 hotels with the hotline number to display for the public, and hotel staff will receive posters of missing children. to watch them during the Super Bowl. Hilton and IHG staff will also receive training on how to identify and report human trafficking.

“Whether it’s before the Super Bowl or in everyday life, we all need to work together to fight human trafficking,” Bonta said. “…Businesses and members of the public can all be part of the solution. One way to help is to post information notices from our office in your workplace to share resources to support survivors and prevent trafficking.

It’s A Penalty was created in collaboration with the A21 association in 2014 to draw attention to sport. It educates sports fans and the public on how to identify human trafficking and the resulting penalties.

Its website lists human trafficking as a “major problem” in Los Angeles and the United States.

“Children as young as 12 are sold for sex in Los Angeles, California, where the tourism industry, adult entertainment industry and the region’s international seaports and airports create a lucrative and highly accessible to traffickers,” says It’s A Penalty. as part of his Los Angeles Super Bowl anti-trafficking campaign.

Nationally, It’s A Penalty estimates that between 100,000 and 300,000 children have been trafficked and sold into the sex industry, citing the California Human Trafficking Fact Sheet.

He launched campaigns at nine other Super Bowls, as well as the Olympics, World Cups and European Championships.

The campaign urges the public to be aware of the signs of a victim of human trafficking, which can include people who:

— do not have official identification documents;

— have tattoos or a mark on their body, which can be a way for traffickers to identify them;

— are not allowed to go into public alone or speak for themselves;

— seem to adhere to scripted or rehearsed responses in social interaction;

— show signs of physical injury and abuse (however, victims of human trafficking are often injured in areas that do not affect their appearance);

— have little or no knowledge of the local language;

— were recruited on false promises concerning the nature and conditions of their work;

— have little or no personal assets or control over their finances.

More information about the campaign and how to spot and report human trafficking is available at itsapenalty.org.