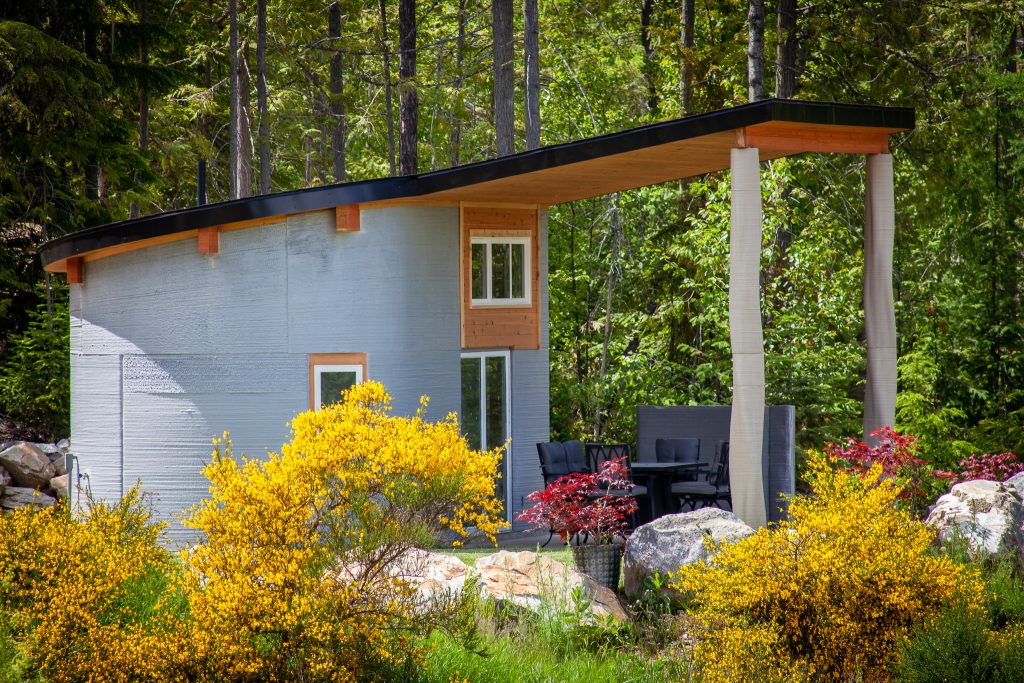 Canada’s inaugural 3D printed “Fibonacci House” has become the first of its kind to be listed on the popular travel accommodation site Airbnb.

The construction capabilities of Twente AM

Founded in 2018 by a technical team with training in automation and wind energy, Twente AM is a manufacturer of concrete 3D printers for complex architectural applications. The company has subsidiaries in Canada, Germany and is establishing one in Dubai, while it operates R&D and production facilities around the world, including in British Columbia near the Fibonacci House site.

Twente AM’s current portfolio includes entry-level, mid-size and large-format 3D printers, the latter comprising its Berlin-1 and Leonardo-2 machines, priced at € 415,000 and € 920,000 respectively. With a build volume of 40m x 15m x 9m, the Leonardo-2 is the company’s heaviest hitter, and its six-axis robotic printer has already been used to create everything from walls and pillars to walkways. .

The company’s emergence since 2018 also mirrors that of the Netherlands as a construction 3D printing hotspot, with several companies developing similar concrete systems there. In Eindhoven, for example, Weber Beamix operates a concrete 3D printing plant, while in Rotterdam, Royal3D used its Continuous Fiber Additive Manufacturing (CFAM) machine to build a modular public workspace.

Inspired by the Fibonacci sequence, a “golden” mathematical ratio often found in nature, the Fibonacci House is based in Kootenay Lake Village, a growing community in the Nelson Basin of British Columbia. Using technology from Twente AM, the house features a unique curved free-form design while maintaining a very sturdy structure, making it completely soundproof and able to adapt to changing climates.

Measuring only 35 m2, the Tiny House still manages to squeeze into a living space, a furnished kitchen, and accommodation for two adults and two children on its mezzanine levels. Fittingly, the micro-building’s bathroom is also tiled with a mosaic tile in the center of the “Fibonacci curve,” while its courtyard continues on that curve to overlook the stunning views of the area.

In practice, the house itself took eleven days to print using a Twente AM system, with a total of twenty additive-made parts included in the build. With glulam beams, handmade window frames and approx. 800,000 m3 of printed concrete, the firm says its finished homes demonstrate the material and energy efficiency gains that can be unlocked through 3D printing.

Regarding World Housing’s contribution to the project, the group sees Twente AM’s technology as a remedy for the growing global labor shortage in the construction industry. Based on the lessons learned from the Maison Fibonacci, the organization therefore intends to create a new community of low-cost housing in Canada, entirely built in 3D printing.

Named “Sakura Place,” the additive-made living space will consist of five three-bedroom homes, which combine to form the petal shapes of a cherry blossom. The houses are built specifically for marginalized communities like single mothers, helping them to live in healthy and safe spaces that combine access to nature, at a price that cannot be found in urban centers.

In terms of booking Fibonacci House and helping the worthy World Housing project, the rental is currently reasonably priced at £ 94 per night, although service charges and occupancy taxes are added on top of that. Interested in a weekend in a 3D printed chalet? Visit the dedicated Airbnb page to learn more here.

Usually used to build proof of concept structures, over the past year or so, 3D printing has been increasingly deployed to create homes for the commercial housing market. In March 2021, ICON listed its first US-based 3D printed homes in the domestic market, with pricing expected to start at around $ 450,000.

Mighty Buildings also revealed that it plans to 3D print and list fifteen green homes on a five-acre site near Coachella Valley. When complete, the fully solar-powered units are expected to market at prices ranging from $ 595,000 for the base model to $ 950,000 for a larger two-house configuration.

Regarding the rental market, the PERI Group is currently erecting a three-story 3D printed apartment building in Wallenhausen, Germany. Under construction using COBOD’s 3D printing technology, the site is not being built as a research project but as a commercial enterprise, to create five rental apartments.

To learn more about additive manufacturing, you can now subscribe to our Youtube channel, featuring discussions, debriefings and images of 3D printing in action.

Are you looking for a job in the additive manufacturing industry? Visit 3D printing works for a selection of roles in the industry.

The image shown shows the 3D printed house for rent from Twente AM in British Colorado. Photo via Twente AM.