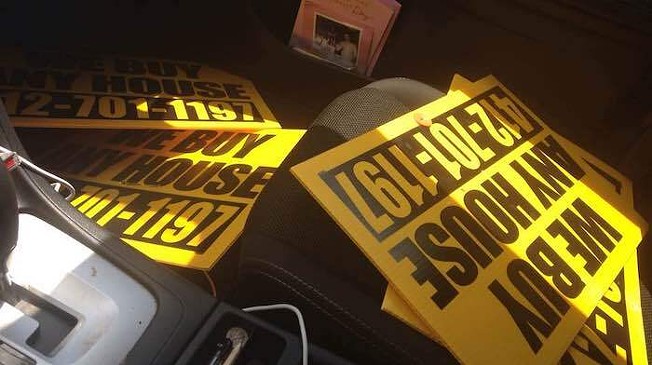 “We Buy Any House” signs collected by Dave Breingan

Signs announcing interest in buying homes, aka the “We Buy Houses” signs, have come under intense scrutiny in recent times.

The signs have been around for years and Pennsylvania Attorney General Josh Shapiro issued a warning in March 2019. He called the signs a scam and warned Pennsylvanians to be wary as companies could offer less than what is worth the home, while leaving customers subject to foreclosure. “These crooks are trying to exploit Pennsylvanians in vulnerable financial situations, and my Bureau of Consumer Protection is not buying it,” Shapiro said at the time.

In Lawrenceville, the signs and wholesale home buying efforts have come under such criticism, that this Lawrenceville United community group is willing to get creative in getting others to remove the “We Buy Houses” signs. .

Bright yellow signs with black text saying ‘We buy any house’ once filled the front seat of the car of Lawrenceville United executive director Dave Breingan. In a June 16 tweet, Lawrenceville United offered prizes to people who bring variations of “We buy houses” spotted in neighborhoods around Pittsburgh.

Standing Offer: LU will give you a price for each “We Buy Houses” sign you bring to us! https://t.co/BQWPlnltXi

Breingan admits Lawrenceville United’s initial offer was “a bit ironic”, but says the group is actually keen to give away prizes to people who bring signs. Although no one has accepted their offer yet, Breingan promises that Lawrenceville United will offer a prize among the items they have left in the office. The exact price, however, “will be a surprise even to us!”

Signs are often displayed illegally, as it is illegal to post signs in the public right-of-way or to attach them to trees, utility poles, fences and outdoor benches. It is also illegal to place signs on property without permission from the owner or agent.

Breingan says it is the City of Pittsburgh’s responsibility to remove illegally placed signs, and if people want the city to remove them, they can call 311 if the signs are not on their private property. But for those wanting a prize, they can pick up signs at the Lawrenceville United offices at 118 52nd St., Suite 2026, Lawrenceville.

“This is part of a trend of practices that often specifically target seniors and low-income homeowners in a booming market like Lawrenceville,” says Breingan. “And they [companies posting signs] can prey on longtime residents who may have bought their homes very cheaply a long time ago and don’t know how much their property is worth these days.