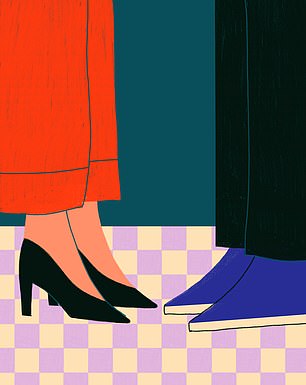 Liz Jones Diary: In which I wonder, am I that bad?

He was wearing sneakers in a restaurant, so I asked, “Where are your real shoes?

I was going to write this week about all the horrible things I’ve said and done to men to create what we call “balance” in the media. Namely, the time I met an ex for his birthday dinner at a Michelin star restaurant, I spotted his horrible velvet sneakers and asked him in front of the butler, in a Joyce voice. Grenfell, “Where are your real shoes?”

But then I remembered a terrible thing the ex had done once. I had gone to see him in Edinburgh. We were at the Missoni hotel, but the stripes started to make me dizzy, so I said on the last morning I would go visit my nieces. He said, ‘Okay, but I’ll come see you at the station after.’ He bought me a first class ticket because I would go home without him. He was going to spend a week on Skye “to decompress”, which made me wonder, “A mini-break with me?”

I’m always nervous and anxious when I’m about to approach a moving object, which is why I always hate riding on top during sex. So I said, ‘No, please don’t leave me. I don’t know how long I’ll be with the nieces. To which he replied, with annoying clarity: “But I have reserved your place. I know what time the train is.

I went to see my nieces, thinking I had put him off, but later, as my cab dropped me off at Waverley Station, I spotted his car, illegally parked in a casual corner. He had arrived anyway. I said to myself “Oh no! Because I hadn’t managed to put all of my clothes back in my suitcase (why does this always happen?), So I was also holding a Sainsbury’s carry bag containing my laundry. I was about to throw him when he got out of his car (difficult, seeing as it’s a sport, and he’s not small) and came towards me and at that moment I realized that THERE WAS A WOMAN IN THE PASSENGER SEAT. To her credit, she had the decency to be a little offended.

I scolded him, asked who the hell he was? No! I was just embarrassed, although in an early version of the #MeToo movement I made sure that when he went to give me a goodbye kiss he only had a mouthful of black hair. But I really should have gotten her around her head with my laundry. He had booked my train knowing he was about to do the second round with someone else. (When I asked, years later, who this woman was, he just smirked and said, “My human satellite navigation lady.”)

So, hmm, what else have I done that deserves to be cheated, or called the C word, twice? The first time a man called me was in Edinburgh again. I had booked and paid for a Georgian Airbnb (I know! What a bitch!) Two bedroom apartment in case we had a fight and, yes you guessed it. He ended up sleeping in the guest room. But he still managed to send the expletive to my phone.

So, I couldn’t help but wonder, do I deserve this kind of treatment? Why are some women adored, expected, supported and flattered, and I get sent bad words to me by SMS?

The worst my ex-husband could say about me in The Telegraph was that I am very OCD about cleanliness and my cats *. But is it surely a good point? Oh, and that I showered him with expensive gifts and long-haul vacations **.

I think the problem is, men walk into my orbit, drawn, like moths, by my dazzling wit and beautiful hands, and then they instantly get nervous about my lifestyle, my work ethic, of my *** rewards and success so that they want to ruin it by deliberately not using coaster or taking several months off (from what, you might be wondering?) to end up in another woman’s vagina. “Where are your real shoes?” That doesn’t sound so bad now, does it?

* He had a very rider

attitude towards Squeaky and Snoopy, which he renamed Sniffy and Scratchy

New York, Lucca, Cardiff, Delhi, Udaipur, Himalayan foothills, Marrakech with a member of Blur, Babington House (twice), Claridge’s, yoga retreat in Ibiza (I sent it on a press trip , without me, which seemed to him to prefer)

Join Liz and her loyal (long-suffering) assistant Nicola as they peel through her weekly YOU magazine newspaper and dig through the archives to relive crises, betrayals, bullets… and more in this brilliant podcast. They are straightforward, outrageous and utterly hilarious. Listen now on Apple Podcasts, Spotify, Google Podcasts and mailplus.fr