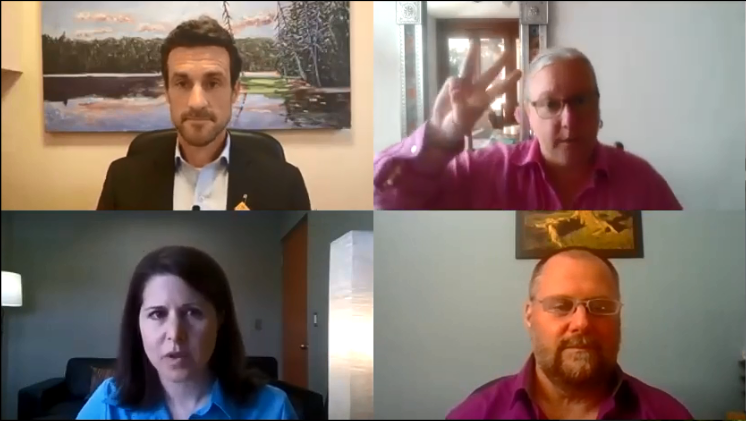 The Parry Sound-Muskoka provincial candidates faced off for the third and final time in Huntsville on Wednesday.

Only four candidates showed up for the nearly 90-minute virtual debate, Erin Horvath of the NDP, Matt Richter of the Green Party, Doug Maynard of the New Blue Party and Brad Waddell of the Populist Party.

The debate, sponsored by the Lakelands Association of Realtors, opened with a question from the association about the affordable housing crisis.

New Blue’s Maynard said the crisis isn’t necessarily the number of units available, but the types of units available. He said that looking around he saw many more luxury homes and condos being built than homes designed for the average person. Maynard said we need a government that will back down on that front and try to get builders and developers to start looking at building more affordable homes.

The Green Party’s Richter said the lack of affordable housing was not new, adding that it was growing from election to election. He said our riding needed more housing so people could afford to live and work there.

Richter said officials must prioritize the government getting back to building affordable housing, which means saying no to a $10 billion highway south of us and yes to building more than a hundred thousand rental units. affordable to do the job.

The NDP’s Horvath touted his party’s “Homes You Can Afford” plan, which will remove exclusionary zoning allowing a wider variety of affordable homes to be built. She said the plans also included 250,000 income-appropriate or below-market-rent homes and a 10% down payment for new home buyers.

Horvath also said the NDP plans to raise the non-resident speculation tax to 20%, like they did in British Columbia and Toronto, but have expanded across the province.

Waddell, from the Populist Party, said that when it comes to rent, the government needs to reduce the number of Airbnbs, which Horvath also agreed with.

The candidates were also asked what their respective parties had in store to deal with the rise in hate speech, racism and the erosion of public safety seen over the past two years.

Richter said that across Ontario, Islamophobia is at its highest, adding that the province needs all-party support to ensure the London Family Act moves forward.

He said now is the time for politicians to cross party lines, speak up, model strong leadership and say that any type of hate-motivated action is clearly not not acceptable.

Maynard agreed with Richter on the need for cross-party communication and added that the New Blue Party would push a policy where this sort of thing would not be tolerated at any level of government. Any member of government who chose to try to create this division or vomit hatred would be removed from further discussion of the issue, he said.

NDP’s Horvath said his party plans to implement a provincial anti-racism strategy that will be informed by race-based data collection. She said if elected, her party would introduce training for all public employees and legislators, adequately fund and support community organizations that do anti-racism and LGBTQ+ work, and establish an Anti-Racism Advocacy and Advisory Council. racism in Ontario.

Waddell also echoed Richter and Maynard’s point that tackling hate speech and racism crosses parties. He also said it was a problem exacerbated by the lockdown which separated families and loved ones.

It’s also about education, Waddell said, adding that it’s about understanding that a different culture isn’t something to hate, despise or shout at.

Absent from the debate were Progressive Conservative candidate Graydon Smith, Independent Daniel Predie Jr. and Andrew John Cocks of the Ontario Party. Moderators, however, mentioned that Cocks attempted to log into the debate but was unable to do so due to technical difficulties.

The provincial election is June 2.