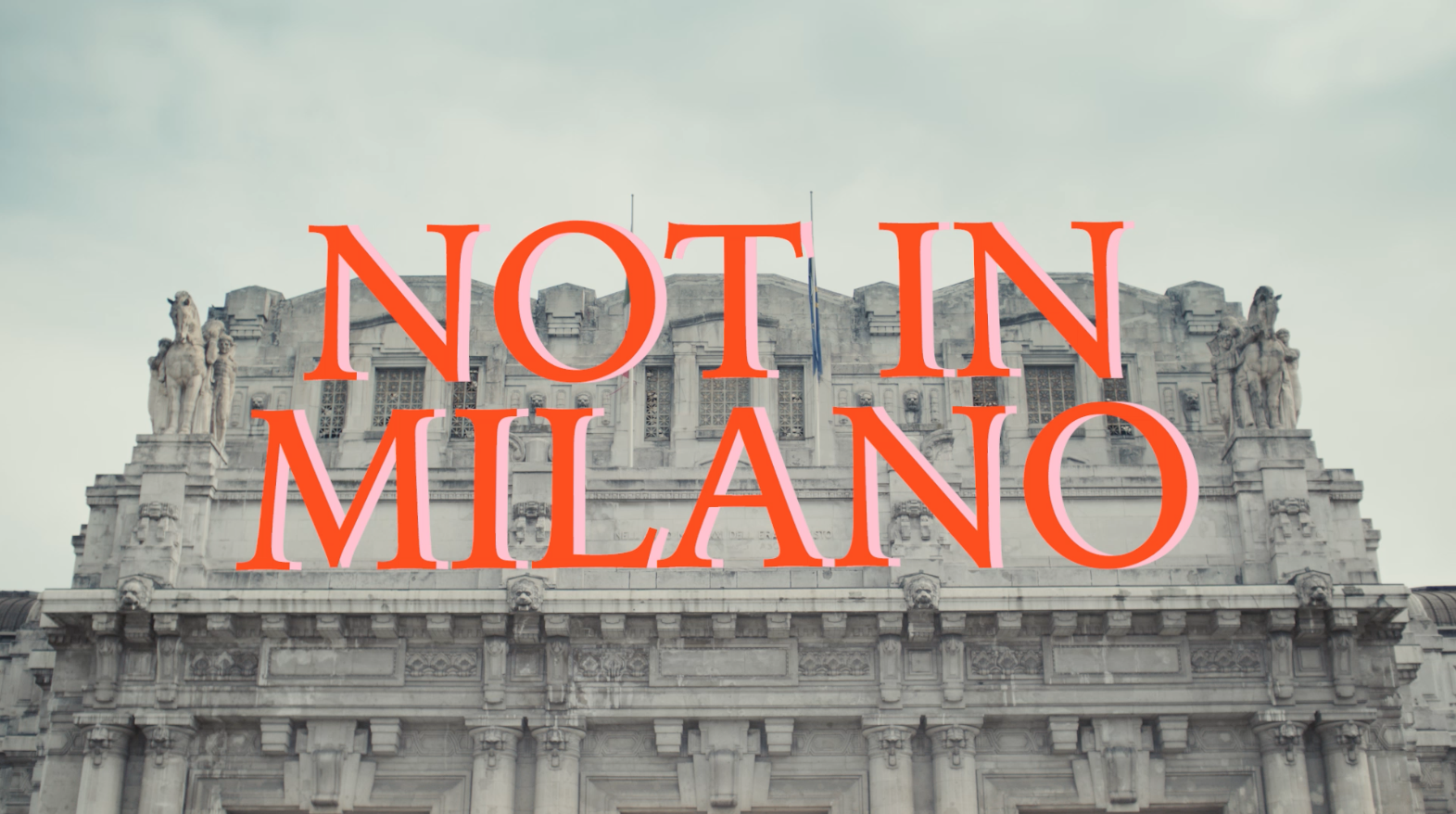 MILAN – “Not in Milano” is the slogan of an international communications campaign that aims to attract tourists to the city, with a little help from ambassadors ranging from Margherita Maccapani Missoni to design guru and gallery owner Rossana Orlandi.

“Although the word ‘not’ conjures up something negative, in this case we are turning it into something positive,” Milan mayor Giuseppe Sala said during the campaign presentation at Palazzo Marino on Tuesday.

Using an ironic tone and eye-catching visuals, the short clip aims to combat clichés and features Maccapani Missoni and Orlandi in iconic locations, the former wandering around at Stazione Centrale station and the latter having a cappuccino at the iconic Camparino bar in the center of the Galleria Vittorio Emanuele II.

“I’m a country girl, but as soon as I could, in 2001, I moved here,” Maccapani Missoni said. “At the time, I was also an ambassador for my family business and I used to travel a lot around the world. On these trips, people’s reaction to learning that I was from Milan was almost to regret that I came from such a city. Since my goal is to [celebrate] her qualities, so I couldn’t be prouder to be a part of this project, ”added the designer, who stepped down as Creative Director of Ms. Missoni earlier this year.

The overall concept of the campaign is focused on relaunching the city as the best European destination for a ‘back to business’ trip by rejecting the stereotypes associated with this type of tourism – which is essential for a financial and commercial center like Milan – and showing how business and lifestyle can go hand in hand.

“Have you ever rushed to your first meeting of the day without having a cappuccino?” Not in Milan, ”said a voiceover in one of the segments of the clip, which ends with the invitation to“ come and see what real business looks like in Milan ”.

Luca Martinazzoli, Managing Director of Milano & Partners, the city’s official promotion agency, explained that the campaign emphasizes business tourism as it is a key asset for the city compared to to other Italian destinations.

Milan has always been Italy’s financial and industrial powerhouse. In 2019, the city generated 144 billion euros in total added value, or more than 10% of Italy’s GDP.

“The aim is to increase the quality of tourism here, rather than the number of tourists. Being mainly motivated by commercial objectives, this type of tourism is sustainable with the city, ”Martinazzoli noted.

Founded by the Municipality of Milan and the Chamber of Commerce of Milan, Monza, Brianza, Lodi, the Milano & Partners association activates partnerships and collaborations with several companies, brands, universities, cultural institutions and local public entities to strengthen the international attractiveness of the city. It is also supported and financially supported by 15 private entities – including Pirelli and Accenture – which invest each year in the company’s promotional projects.

Martinazzoli said that an annual budget of 3 million euros is spent on promoting the city.

For the production of this particular campaign, Martinazzoli credited the We Are Social Italy agency with having mainly contributed to its production by developing the strategic and creative approach. Milano & Partners will invest 300,000 euros to promote it abroad, notably in the United States, the United Kingdom, France and Germany, where the spot will be broadcast from next week.

All the ambassadors featured in the campaign will further amplify it by posting it on their social networks.

Martinazzoli said the goal was to tap into the faces of different industries to show the many facets the city has to offer. Even though most of the personalities were not born in Milan, they found professional success there, an aspect that Martinazzoli said was important to underline in order to telegraph that “Milan is an open city and has always welcomed everyone. “.

“Being part of this project is a due contribution,” said Dalmasso, who founded Satispay in 2014 in Turin, but acknowledged that relocating the company to Milan after 18 months was the only way to allow it to grow. her size.

“From that moment, everything accelerated for us. This city seemed so inaccessible and expensive but it is a place that welcomes you quickly and where everything becomes possible…. It empowers you because it provides everything you need, ”added the entrepreneur.

Despite the temporary setback caused by the pandemic last year, Milan is gearing up for an eventful fall season across different industries. When it comes to fashion and design specifically, before the city hosts Fashion Week September 21-27, it will host a special edition of the Salone del Mobile international furniture and interior design fair.

For the occasion, renowned Italian architect and urban planner Stefano Boeri will take over and curate the event, which will be called “Supersalone” and will take place from September 4 to 10. Separately, on Tuesday, the Salone del Mobile named Maria Perro its new president, succeeding Claudio Luti, who stepped down earlier this year.

“It took a lot of courage and will and we are fighting to achieve great results for the September event,” said design guru Orlandi, who became moved as he explained that “this industry is suffering, materials Firsts are missing but we are here, Milan is ready and we will leave full of energy.

“This city is fantastic, extremely generous and there is not a single person refusing to lend a hand at the moment,” she continued, adding that she was proud to be Milanese. “Someone told me that this city has a rare energy and I find it beautiful and perfectly representative of who we are.

At the launch of the campaign, personalities from the scientific community and the business community, who have helped to organize world-class meetings in the city in recent years, were also recognized for their contribution to improving the reputation. International of Milan by receiving a special plaque and letter from the mayor.

In 2019, Milan attracted a record number of nearly 7.5 million business and leisure tourists who spent at least one night in the city, an increase of 9.4% from 2018.

The city’s mayor appeared cautiously optimistic as the first signs of recovery have been seen in recent months, with tourists from the United States and Spain currently returning to the city. “We are currently the second city in tourist flow in Italy, so these are good signals for a good restart,” he said.