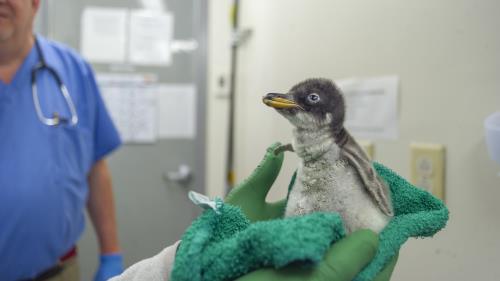 As any parent knows, kids tend to do what you least expect. In the case of an endangered four-eyed turtle hatchling at the Tennessee Aquarium, however, the mere fact of existing was – in itself – a huge surprise.

On July 11, a volunteer was tending to an enclosure in an emergency area of ​​the River Journey building. This habitat was only supposed to house an endangered female turtle (Sacalia quadriocellata), but the volunteer soon discovered that the adult turtle was not alone. Perched on top of a layer of vegetation was a tiny newborn baby who everyone agreed shouldn’t even have been there.

“The adult female hadn’t been with a male for over a year, so we didn’t check to see if she had laid eggs this year,” says Bill Hughes, Aquarium herpetology coordinator. “To say the least, finding an egg, let alone a newborn, was unexpected.”

Mr Hughes says females of some species of turtles have been documented to store sperm until conditions favor fertilization. This adaptation may have caused the unexpected outbreak, but for now, the origins of the little turtle remain a mystery.

The four-eyed baby joins another who hatched on June 10 from an egg farm that staff knew and had watched. The first newborn emerged from a laid egg on April 15. Both are eating and doing well.

Since 2007, the Aquarium has successfully hatched 47 four-eyed turtles, which are so named for the distinctive eye-like markings on the back of their heads. Found only in mountain streams and ponds in Southeast Asia, this species has been listed as Endangered by the International Union for Conservation of Nature since 2000, due to overexploitation in the wild and loss of habitat.

“These turtles fall under a survival plan for the species that I manage,” says Hughes, who also oversees a management program for the critically endangered Beal’s Four-eyed Turtle (Sacalia bealei). “Growing their population is a long-term goal, so each newborn baby is one more step in the right direction.”

But little turtles aren’t the only recent arrivals at the Aquarium.

On June 24, the Aquarium celebrated the arrival of a Gentoo Penguin chick in the Penguins’ Rock gallery. He began the Herculean task of leaving his egg two days earlier, on June 22, when animal care specialists first saw his beak and heard its squeaky cries. This fuzzy newcomer is the offspring of Flower (mom) and Blue (dad), a new pair of veteran parents.

During a routine veterinary examination the day after hatching, the chick weighed 132 grams, or about 4.5 ounces. After a month of careful care from her parents and close observation by Aquarium staff, the once tiny little ball of fluff now weighs 2.4 kilograms (5.3 pounds), an increase of over 1,800 percent. If a human child grew at the same rate, a newborn weighing seven pounds at birth would tip the scales at 127 pounds four weeks later.

However, size isn’t the only thing that’s bigger in the chick, says Loribeth Lee, the Aquarium’s senior poultry keeper.

“For the first two weeks it was pretty quiet, you just have to look around and study everything,” Ms. Lee says. “Once two weeks have started, however, he has developed a strong personality and loves to scream and slap anything that comes too close!”

For now, the chick is still being fed by its parents, but aquarists plan to start hand-feeding it with solid food within the next two weeks. Visitors to the Aquarium can observe the chick in its nest, surrounded by clear acrylic panels, for the next six to seven weeks, when it is old enough to join the rest of the colony. Her gender will remain unknown, pending the results of a routine blood test in November.

To keep an eye out for the Aquarium’s Gentoo and Macaroni penguins, digital visitors can watch a live video feed from the Penguins’ Rock gallery at tnaqua.org/live/penguins-rock/.

Elsewhere in the Ocean Journey building, a trio of juvenile Longspine Porcupine (Diodon holocanthus) are reared in a grow facility near the Aquarium’s Secret Reef exhibit.

Although they are as big as a thumbnail, these two-month-old pufferfish are dead bells to their round-bodied, spine-covered parents. Under the care of aquarists and a steady diet of brine shrimp, their size gradually increases like balloons inflating in slow motion.

The fish are the offspring of five adults housed in an off-campus care facility. Eggs collected at this facility were taken to the Aquarium, which has been doing pioneering work in in-house marine fish farming since early 2017. Eventually, adults will be brought to Ocean Journey to join the vibrant aquatic community of the Secret Reef exhibition.

Regardless of their age, there’s no denying the charisma that the long-spined porcupine fish exudes, says senior aquarist Kyle McPheeters.

“These are definitely one of the cutest fish we work with, especially as babies,” he says. “But even adults have really outgoing personalities and very expressive faces.”