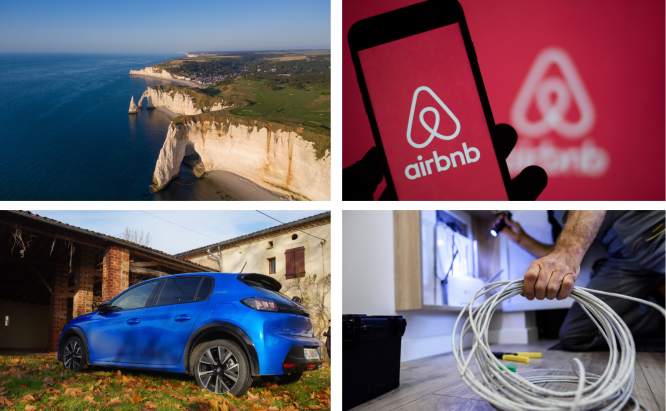 Flooding, erosion and drought are still not factored into homebuyer decisions, industry figures have warned.

According to the Ministry of Ecological Transition, more than 50,000 homes in France will be affected by coastal erosion and flooding by 2100.

The government is trying to raise awareness of the dangers of buying in natural risk areas.

Since January 1, real estate agencies in France must specify in their advertisements for sale and rental if a property is located in an area exposed to coastal erosion.

Sellers or owners must also provide a Coastal Erosion Risk Report to all prospective buyers or tenants upon first viewing of the property, and keep them informed of any changes throughout the sales contract confirmation process. or rental.

Notaries also must alert buyers to natural risks when signing the deed of sale, and architects are also mobilizing now. Four years ago, the profession created a graduate degree in major hazards to learn how to intervene in the event of natural disasters.

However, this does not seem to deter buyers of fashionable resorts.

This despite the fact that the English Channel and the Normandy region have recently pledged millions of euros to help with relocations.

Read more: The rise in sea level causes the exodus from the northern coasts of France

Frédéric Violeau, notary in charge of national land statistics at the High Council of Notaries, said Le Figaro“The coast is still the place where we negotiate the least.

“We see no awareness of the receding coastline. The buyers only see the house near the sea but not the sea which can reach the living room.

According to an Opinion Way survey for the National Observatory of the Living Environment, 57% of households declare that global warming will impact their choice of future place to live.

However, when asked to specify the type of phenomena that will affect their decisions, natural disasters (floods, drought, rising waters) obtain only 12% of the vote, far behind heat waves (25%).

Airbnb responsible for the illegal subletting of accommodation in Paris

Airbnb was held jointly and severally liable for breaching a rental agreement by not verifying whether the tenant was authorized to sublet before advertising her accommodation on its site.

The Paris Court of Appeal ruled on January 3 that the firm, an online platform where people can list or rent short-term use goods, had “largely contributed” to the infringement by not asking for proof. that the rental was legal.

The case concerned a tenant who had sublet her accommodation in the popular Marais district in the 4th arrondissement of Paris without authorization in 2016 and 2017, for 534 days.

In 2020, a Paris court had already held the platform jointly and severally liable, and this decision was confirmed by the Court of Appeal.

She made the distinction that Airbnb is not just a host who connects two individuals and reminds them of the rules of renting but a content editor, who plays an active role in writing listings and their content through “precise instructions”. ” and ” many constraints “.

As such, the platform must also ensure that all advertisements published on its site are legal.

Jonathan Bellaïche, the owner’s lawyer, told AFP that this decision reminds us “that these web giants have the means necessary to ensure the dissemination of content that respects our legal principles”.

In a statement to AFP, Airbnb France argued that “this matter is strictly a private dispute between a landlord and a tenant” and said it was considering “all options to challenge the decision”.

Read also: Tourist reports hidden cameras near shower in her Airbnb in France

Vehicle access to neighboring property is legal, per court rules

Homeowners can claim the right to drive on a neighbor’s property to access theirs – as long as there is no other way.

A French court handed down the decision on December 7, after the owner of a fully fenced property complained that his neighbor had denied him access other than on foot to their land.

Neighbors argued that this had always been the case and that the proximity to the street and the ability to park there provided easy access to the gated house.

Read more: Can you leave your car parked on the street in France?

They added that the narrowness of the passage would impede emergency vehicles, reports Le Figaro.

However, the Court of Cassation ruled that “access by motor vehicle corresponds to the normal use of land intended for housing”.

As long as it was not impossible to foresee it, an owner can claim a right of way by car.

He added that proximity to the road as well as historic arrangements with previous owners on a trail were no reason to decide otherwise.

Read more: The owner of a French castle blocks access to walkers

According to the court, any land must be accessible to its owners in various ways depending on its use.

For a small unbuilt plot on steep terrain, a footpath may suffice, but in the case of agricultural land, for example, access by machinery used to cultivate it would be necessary.

Getaway to the DIY Castle property for sale

fans of Getaway to the Castle and its spin-off series can get its hands on sprawling French property – one of the chateaux that featured in the programs went on the market for €821,500.

The property shown in Getaway to the DIY Castle, which follows families who, like Dick Strawbridge and Angel Adoree before them, are renovating large homes or looking to buy one.

In this case, most of the work has already been done, however. The list describes a property which has been “renovated to a very high standard by the current owners, who have also worked hard to restore it to its rightful place in the hearts and lives of the local community”.

Improvements include the creation of a self-contained apartment and studio/gîte, as well as a fully licensed vintage tearoom. There are also bed and breakfasts and a popular British food store.

The architectural plans and permissions to create six further gites, a restaurant and a large reception hall have already been obtained – so there is still room to get your hands dirty!

The chateau is set in 1.54 hectares of land, which includes a small lake with a wooden waterside pavilion.

It is located in Saint-Maixent-l’Ecole, not far from Niort, in Deux-Sèvres.

If you buy a new property with wired internet, you are entitled to a guarantee of good working order for two years, has ruled the highest French court.

The ruling, handed down by the Court of Cassation in December, means that builders are presumed liable for malfunctions in any wiring or computer sockets they install, just as they would be for equipment such as doors, windows, heating and shutters.

Read more: How do I find the best TV and Internet provider for my French household?

However, the builder in question, who has not been identified, claimed that this guarantee of proper functioning only applies to moving parts of the house, not static parts.

Computer cables and jacks are not moving parts, the argument goes, and dissatisfied customers should invoke the builder’s classic civil liability, which involves first proving fault and consequential damages.

However, the Court of Cassation held that a computer network is not static since its purpose is to transport electrical signals, which it must degrade as little as possible.

This constitutes activity, he said, and therefore it is up to the builder to repair or replace anything defective for up to two years after completion.

The manufacturer also argued that any problem with the wired Internet connection should be apparent at the time of delivery, to rule out any liability based on latent defects, but the judge also rejected this argument, reports BFM.

Increase in the hangar tax, renovation aid, rental prices: the point on real estate in France

Real estate in France in 2022 and forecasts for 2023: Low sales, rising prices