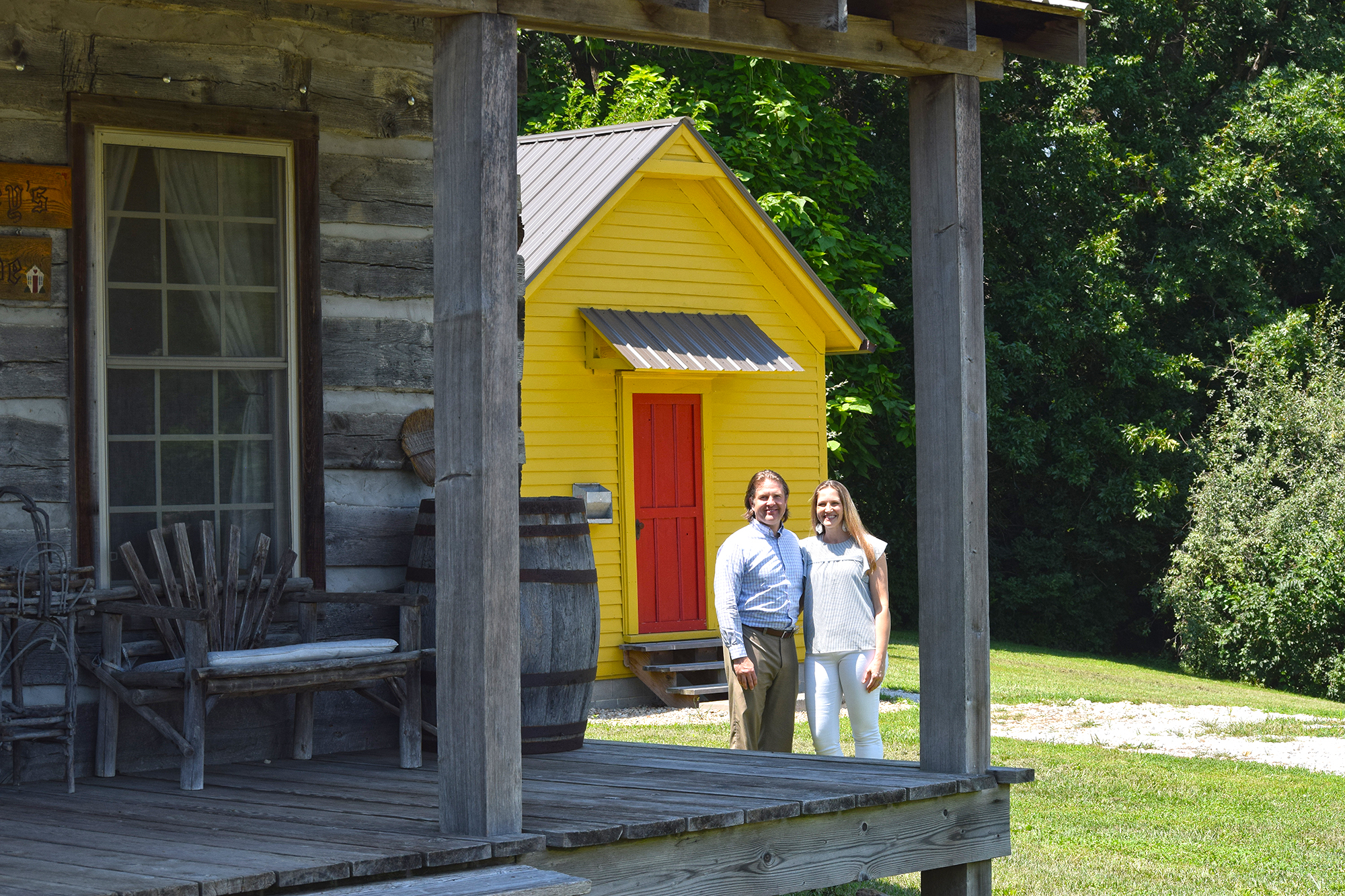 Neighbors: For the Leonard family of Jacksonville, sharing a unique story with travelers sweetens a dream

Bryan Leonard had a dream.

“Our family was growing and we were hoping to find some land and build a house,” Leonard said, “and I always thought it would be cool to find one of those old log cabins to use as a place to stay for the visitors.”

That dream has turned into an Airbnb sensation as Bryan, his wife, Heather, and their six children welcome visitors from around the world each week to a restored log cabin and separate, restored historic farm dormitory on their rural property in Jacksonville.

“We’ve long since lost sight of how many countries we’ve had people from, all over Europe, South Africa, Australia, China,” Bryan Leonard said. “The structures are in the perfect location, they are unique, they have history, they are quaint and fun.”

The story of how two historic rural buildings were moved from their original location and now welcome visitors is at least as unique as the structures themselves. The story began when Bryan and Heather, who had frequently spent the night in several restored log cabins in the Nauvoo area, had a conversation with the man who owned the buildings.

“Bryan got to know him and they became friends, and one day the guy called and said ‘hey, there’s a log cabin in Lima,'” Heather Leonard said. “And Bryan was like, ‘I have to go get this cabin’.”

Bryan’s family owned a log cabin in Michigan when he was young and his grandparents lived in a log cabin west of Jacksonville, so the desire to have his own log cabin came naturally. He and Heather stopped at the cabin in question on the Adams-Hancock counties line, left a note on the door for the owner, and the owner called later and agreed to let them take the cabin.

Bryan and several church friends spent a Saturday dismantling the late 1800s cabin, loading it onto a trailer, then moving the parts to Jacksonville. The trailer was stored for a year at Leonard & Six Plumbing and Heating, a business owned by Bryan’s family, while Bryan and Heather searched for a property on which to build their new home and rebuild their historic log cabin.

The couple eventually bought land just south of Interstate 72 and built their home, and Bryan spent nearly eight years on “just me and Saturdays” restoring the historic log cabin just west of their new residence. It was furnished with pieces from his grandparents’ estate.

“We actually lived in the log cabin for about six months while we were building our house, and then we thought, ‘What are we going to do with this?'” Bryan said. “So we decided to put it on Airbnb and see what happened. We never imagined it would be as popular as it has been.

Bryan used materials from several different structures in the Airbnb log cabin. The ceiling beams are from a barn near Carrollton, part of the siding is from a barn west of town, the floors are from the old Rushville lumber yard barn, an interior door is from of the old Cherry House that was demolished in Jacksonville.

Heather said many people seek out Audrey’s abode, named after Bryan’s grandmother, because of the unique log cabin experience combined with the modern conveniences of electricity, plumbing and The air conditioning.

“Some people want to experience Lincoln, stay in a log cabin and take the kids to see the sights of Lincoln,” Heather said. “It’s often like having new neighbours. If they bring children, our children will sometimes play with them.

The Airbnb log cabin was so successful that Bryan and Heather started thinking about ways to add a second historic structure. Bryan found a likely candidate where Orleans Road crosses over I-72 near Alexander, a farm with several old buildings including “a nice little structure with a chimney on the side”

The structure was a farm bunkhouse from the 1930s or 1940s. Bryan contacted the farm owner, Paul Armstrong, and before the phone call ended, Bryan had his second historic building.

That was the easy part. The hardest part was moving the structure, intact, the 18 miles of the Alexander countryside to the Leonard farm.

The same church friends who helped move the log cabin (“so basically he’s got a lot of favors he owes,” Heather said) helped Bryan in the summer of 2019 as they lifted the dorm onto a trailer and began the slow, all-day journey to his new home.

“Luckily we had about 6 inches to a foot of clearance with all the wires between Alexander and here. The Illinois Rural Electric Co-op came out and measured every wire for us,” Bryan said. are amused I think in the process too We had to lift a wire or two to get it under but didn’t have to pull any out.

The restored structure is called Bunkhouse 74 because it originally stood at Mile 74 along the freeway. The Leonards have been renting it out on Airbnb since 2020.

“It’s a small house and Bryan has installed a bathtub outside. And people love this tub! Heather said. “It’s very private, but people talk about sitting in that tub for a long time.”

Heather said Audrey’s Abode and Bunkhouse 74 are popular for their prices as well as their pedigrees.

“We are a family of eight (ages 7-19) and we don’t want to overestimate anyone. We wanted to have places that we could afford to rent out ourselves,” Heather said. “Some people charge a pretty high cleaning fee, but we only charge a cleaning fee if you bring a pet. We’re not trying to get rich, we’re making the most of it.

When he’s not transforming historic structures into Airbnbs, Bryan is director of marketing and communications at Illinois College. Heather is a registered nurse at Jacksonville Memorial Hospital. The Leonards paid for all the work on their historic lodgings out of their own pocket. And it looks like they’re not just sitting back and admiring what they’ve accomplished on their property.

“I would like to add a small restored barn. It would be a reconstruction with fully salvaged materials,” Bryan said. “There are a few places where we have room.”

To which Heather immediately replied, “and where would we put it?” And who will clean it?

“Bryan needs a creative outlet at all times. He’s very project-oriented, he can’t pick up a book and read it, he has to do something,” Heather said. “He said he loved the process of figuring it out almost more than actually doing it.

If you have a suggestion of someone who should be profiled, send their name and any available contact information to [email protected]

‘It’s like Airbnb but for boats’: Finger Lakes boaters use rental…