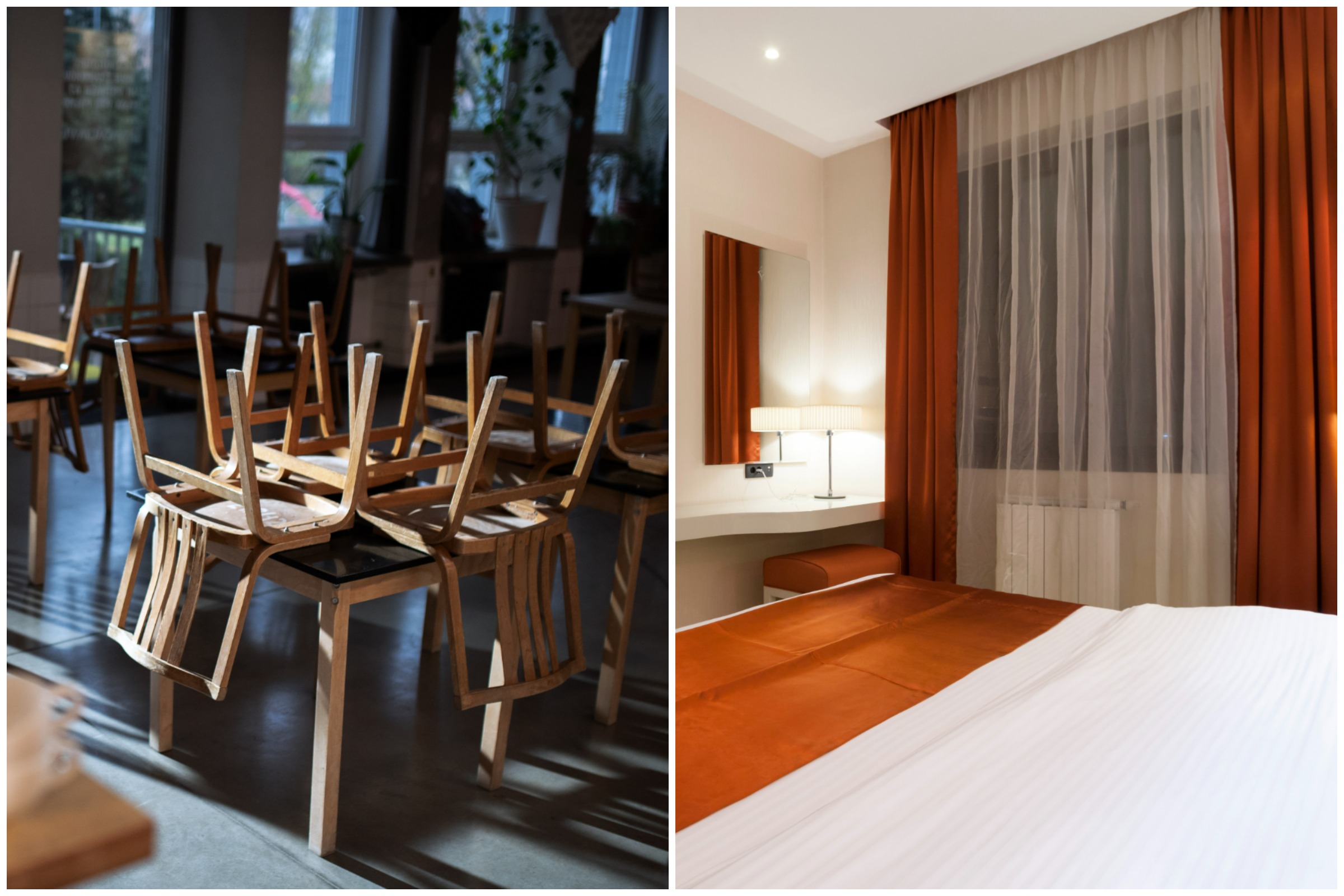 A woman was shocked to rent an Airbnb in New York – which was advertised as offering city skyline views – only to find she was in a restaurant.

Desiree Baker booked a trip to the Big Apple and picked a room that looked bright and airy in the photos, with a great view of the city.

Baker shared a series of clips on his TikTok account @desireerosebaker, explaining that the room was in a “good location”, adding that it was “a nice hotel room, more than I need, I I just need a bed to sleep in.”

After arriving in the middle of the night, she fell asleep straight away and in the morning couldn’t wait to roll up the blackout blinds to admire the skyline.

“I was so excited to open the window, roll up the blinds and let myself see the view,” she said.

To her horror, she discovered that she was, “In a restaurant. We are fully in a restaurant…I can open this window, fully, join these people at their dinner, at their lunch.”

Demonstrating how close she can touch a customer’s table, Baker added, “You can’t make this up.”

Baker shared a number of follow-up videos, in which she claimed she was staying at Cassa, which has a Cassa Times Square Hotel and Residences website, and an Airbnb site listed as Cassa Studios and Residences.

The Airbnb site says, “We can’t confirm the exact room, but your room will be the same category as you see in the photos.”

Sharing more footage from her bedroom on Monday, in a clip that has been viewed almost 7 million times, Baker asked, “HOW IS IT LEGAL, you literally can’t make this up. I can open the window and touch their table.”

She compared the glossy publicity photos with her real view, which can be seen herebut this time there was a couple dining at the table.

“It’s a little better close-up on the view, the window, that we thought we had. I pulled up the blinds, there are no buildings. We are in a restaurant.

“Look at this, it’s a restaurant, it’s two people having dinner. I don’t, they sure can’t see us.”

Although she turned off the lights, assuming she couldn’t be seen by diners, she decided to investigate further and entered the restaurant herself.

She claimed it was the Tempura NYC restaurant, located at 511 9th Avenue near Times Square, as she walked to the tables next to her room, confirming it was a one way glass.

Baker filmed from the other side, as his travel companion opened the window and waved. She revealed that restaurant staff gave them shots of tequila to take back to their room.

“And now I’m just gonna put them back out the window,” she joked, referring to the empty glasses. “Great service,” she added.

Commenting on the viral clip, JennyDawnTX wrote: “I think you are their best server friend.”

Kiersten said, “Order pick up and have them bring it to the window.”

“It’s like those dreams where you come out of your bedroom or something at home in a random public place like it’s normal,” Hair and Hay said.

Alyssa commented, “Omg I was sitting there with the shade up and people watching all night.”

Her bizarre experience didn’t end there, as she claimed the couple she accidentally captured eating their meal saw her video and contacted her.

Baker claimed the woman, named Ilana Katz, contacted her via her Venmo, saying, “I’m the date girl in your TikTok…Seriously! Tempura last night…It’s me and my boyfriend .”

After her video exploded, Baker answered numerous questions in another clip, asking if she was getting a refund.

She shared screenshots of a conversation – which she said was with the host, named Kristina. Baker complained that the “pictures of the room we booked were completely inaccurate. There is a restaurant outside our window, not a view outside.”

Baker also posted the response she allegedly received, which read, “I think everything went well during your stay and I’m glad to know we were able to accommodate you during this time of year.”

While Baker said she didn’t get a refund from the host, she shared another post that she says is from Airbnb.

It reads, “We found out about your experience through the TikTok video, needless to say, it definitely shocked us and it’s not the experience we want our guests to have.”

The post went on to say they were following it up with the host and offered Baker a coupon or discount.

AirBnB said Newsweek“We have been working to support the customer and the hotel is currently under investigation.”

Newsweek has reached out to Baker, Tempura NYC and Cassa Times Square Hotel and Residences for comment.

Over 80% of Africa’s Savannah Protected Land is failing or deteriorating, new study finds