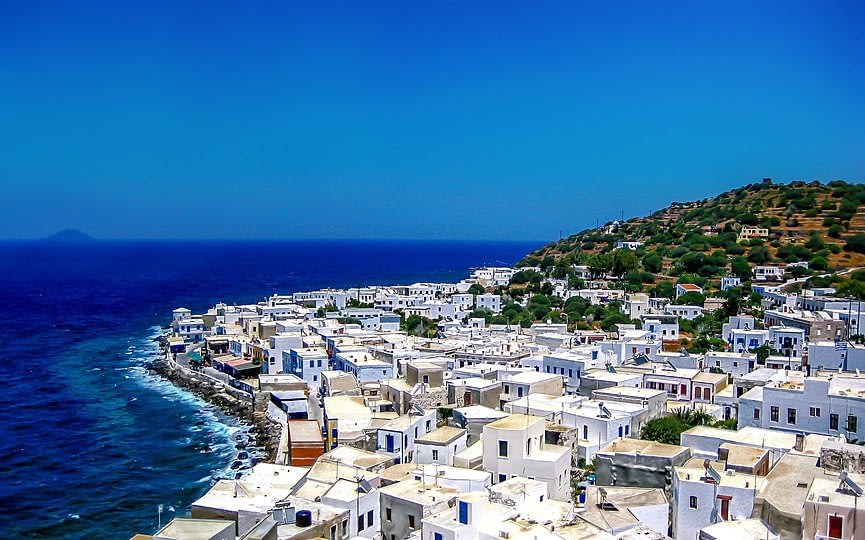 Nisyros: The ‘Santorini’ Experience Most Americans Haven’t Heard Of

I have long been puzzled as to why non-Greek Americans, in overwhelming numbers, when visiting Greece limit their travel almost exclusively to two islands: Mykonos and Santorini. They are perfect destinations, of course, but there are so many other wonderful islands to visit. This would be the equivalent of, say, British tourists spending their vacations in the United States visiting only Boston and Las Vegas. Again, two perfectly good destinations, but why only these two?
Credit traders who sold Americans on the Mykonos/Santorini duopoly.

I recently had a conversation with a friend who has visited both islands (I set foot in Mykonos on a day trip and didn’t go to Santorini at all): he told me says that Mykonos is definitely more fashionable, but Santorini is uniquely beautiful and worth visiting at least once.

I believe so, from the many photos I have seen. But if Santorini’s beauty is extraordinary, so is its price. Alternatively, I suggest the island of Nisyros, which offers its own version of otherworldly beauty at a fraction of the price. In fact, when it comes to eating, drinking, lodging and getting around, Nisyros is so affordable that there’s nothing Elon Musk can do there that the average tourist can’t ( except maybe buy the whole island).

People who have had Lasik eye surgery often describe that they now see with a clarity they never imagined possible. Likewise, when you step off the boat to Nisyros, you will notice how exceptionally bright everything is. Not only because all the streets and houses are painted white, but because the daylight is so vibrant that you would think Nisyros has its own sun. For those with sensitive eyes, nothing a pair of sunglasses can’t fix.
Speaking of celestial bodies, there is a time of year when the Nisyrian moon is so large and seems so close – as if resting on the roof of the centuries-old Panagia Spiliani church, built inside a cave – that you’d swear you could reach out and touch it. And if you take a picture of it, your friends might have photoshopped such an abnormally large moon. Unfortunately, the dates when this happens vary from year to year, but an astronomy enthusiast should be able to figure it out.
The sounds are also captivating. You’ll hear the crickets and the waves of the chill (by southern Greek island standards), the salty sea crashing against the rocks ashore.

To give you a better idea of ​​how small Nisyros is, there is no airport. This is because there is no flat space large enough to land an airplane. There is also not a single traffic light on the island, and some of the residential streets are so narrow that they are best navigated on foot or by moped.
There are only four villages on the island: the capital Madraki; the seaside Pali; and the picturesque mountain villages of Emporios, and the one in which both my parents were born, Nikia.

Except for those of Nisyrian descent, few Americans visit this hidden gem. But European tourists – British, Germans and Scandinavians in particular – have discovered it and appreciate its quiet beauty.
In fact, as far as I can remember, the only time Nisyros really got busy during the year was for the feast of Panagias, August 15th. Starting around the 12th of the month, you’d be hard pressed to find a room or a rental car – so if that’s your goal, make your reservations well in advance. Once the festivities are over, most of the hordes that make the pilgrimage each year – from Greece and the United States – pile into boats as the chirping of birds and the whinnying of donkeys once again dominate the aural experience.

There are many ways to get to Nisyros, but the easiest is via Kos, a neighboring island that is more touristic and commercial. From Kos, a short ferry will take you to Nisyros in less than an hour. You can also get there from other islands, especially from Rhodes, by large boat or catamaran, which takes about three or four hours.

The only authentic grand hotel on the island is the Porfyris, which my uncle built in the mid-1980s and is run by his daughter and family today. But it’s not the only place to stay. Smaller accommodations with rooms to rent, as well as entire homes available on property rental sites (like Airbnb) are perfectly fine and wonderfully affordable.

For those who truly appreciate natural beauty, there is the historic volcano which has been dormant for over a century. In fact, famous Greek musicians have given concerts inside the crater, and when they do, Nisyros gets a bit more crowded than usual during the off-season of Panagias.
IT’S NOT ALL WINE AND ROSES

I owe it to potential travelers to paint a complete portrait of Nisyros, and so I’m not going to look like a tourist brochure and pretend there are no thorns on the roses. Your internet signal may be spotty. Your mattress may be lumpy or rock hard. Some rental homes and rooms may not have air conditioning. The water pressure may not always be to your liking when taking a shower.
The roads are bumpy and at times steep and scary, especially when going up and down the mountain (but the good news is that there is no traffic there). The beaches are spotlessly clean, but often rough and rocky, with no loungers or umbrellas.
This is not a Club Med vacation. Americans spoiled for comfort and convenience might take a shock to their system by giving it a little rough play, but speaking from personal experience, that quickly wears off, as the pros far outweigh the cons.
A good example of this comes from an experience I had on my last trip to Greece: one of the downsides for us spoiled Americans is that the plastic used to make the water bottles sold in stores is so flimsy that there’s a chance you could actually rip it trying to unscrew the cap. Yes, it happened to me! I had water all over me and exclaimed out loud, “why am I even coming here?!”

A few minutes later, I bit into a piece of fresh fruit and appreciated that nothing I had ever tasted in the US was exploding with such flavors. “That’s why I come here!” I added.

Santorini certainly looks and sounds great and most likely, one day I will make it myself. And for those who can afford it, or who just don’t want to hear from their American friends “you mean you went to Greece and didn’t visit Santorini???” definitely worth going. But if you don’t want to overpay for all the hype, Nisyros is a much more affordable alternative that many say is just as stunning.