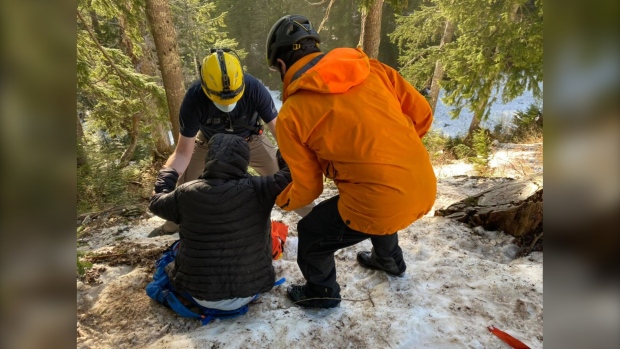 The call first came as four people were caught in an avalanche, according to a post on the North Shore Rescue Facebook page.

However, upon arriving at the scene, the teams – which included an avalanche specialist – determined that there had been no avalanche.

“There was a snow slide… and someone was pushed against a tree and twisted their ankle,” said Peter Haigh, rescue manager.

The person who reported the alleged avalanche made a mistake and transmitted incorrect information, he said.

“It was unfortunate because we spent a lot of time and effort on our own and it wasn’t that bad.”

Shortly after 8 p.m., the search and rescue organization declared that “all subjects and rescuers” were off the field. One of the people involved in the appeal had a “suspected broken leg,” according to North Shore Rescue.

“It would be nice to get a realistic report… because we could have done it more efficiently,” Haigh said.

That said, the fact that no one was seriously injured was still a victory.

The incident near Cypress came after what had already been a busy day for the volunteer rescue team.

In another Facebook post Earlier today, North Shore Rescue said it was responding to three simultaneous calls on Mount Seymour.

All three calls involved injured hikers, according to the publication.

May 30: This story has been updated from a previous version to include new information.