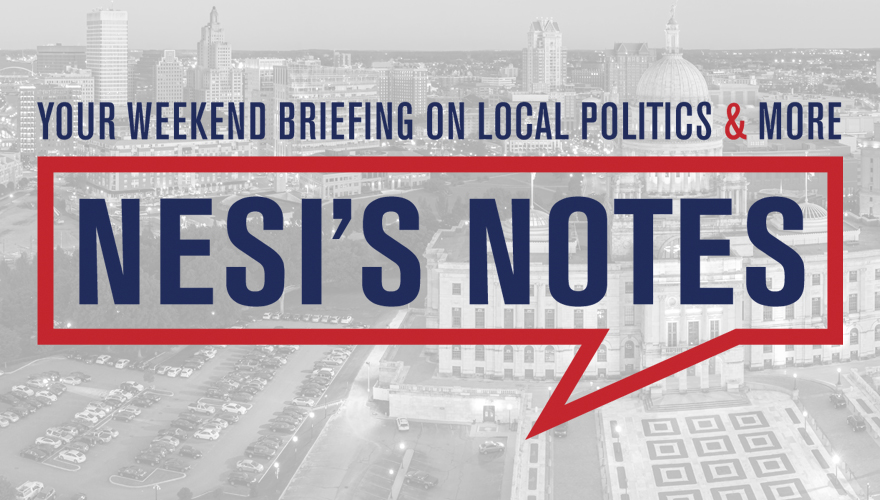 Happy saturday! Here’s another edition of my weekend column for WPRI.com – as always, send your catch, tips, and test balls to [email protected] and follow me. on Twitter and on Facebook.

1. General Assembly leaders have not made a commitment to return this fall for a special session, but it seems likely they will. House tenant Joe shekarchi and President of the Senate Dominique ruggerio were able to end the regular session on an unusually calm note, in part because they addressed thorny issues, including the legalization of marijuana and police discipline. And like Ian donnis Major lawmakers pointed out on this week’s Newsmakers, would much rather wrap up these debates in 2021 than address them in the heat of the 2022 election year. On marijuana, Shekarchi sees little urgency. “It doesn’t matter to me if we are the last state in the union to legalize it or if we never legalize it,” Shekarchi said. Kim kalunian this week. “I have to make sure we’re doing it right. The comments infuriated some lawmakers and pro-legalization activists, who point out that Massachusetts and Connecticut have now both surged into Rhode Island. Yet on both marijuana and police accountability, Shekarchi insists he will only bring the House back this fall if a consensus in State House has been reached. Meanwhile, the Senate has its own reason for returning this fall – judicial confirmations – and senators could try adding charter schools and US bailout spending to that program. Governor McKee may have done his part to increase the odds of a fall session when he vetoed a bill to create a state-wide Airbnb registry, a move strongly supported by legislators who represent coastal communities. While Shekarchi and Ruggerio ignored McKee’s other veto of the week – on the regulation of utilities – they said they were “extremely disappointed” with Airbnb’s, adding: “We will carefully consider our next steps.”

2. When historians look back at Gina Raimondo legacy as governor, they probably won’t give him good marks for his management of the Executive Board of Health and Human Services. Raimondo’s first term was marked by the catastrophic launch of the UHIP computer system, which took years to recover. And now one of the most publicized issues of his aborted second term is yet another EOHHS issue, this time the Eleanor Slater Public Hospital. My colleague Eli Sherman has spent months reporting on the myriad of challenges facing the hospital system, and his in-depth new explanation outlining them all should be required reading for Rhode Islanders. As Eli’s article makes clear, Eleanor Slater’s problems run even deeper than any single administration and raise deep questions about how the state should structure services for people in need. years – or decades – of long-term care. Remember that Rhode Island is the only state in the country to have never built an autonomous state psychiatric hospital. Dan McKee is surely frustrated that Raimondo let him hold the bag on Eleanor Slater. But he also has an opportunity, if he wants to seize it, to be the governor who finally rethinks and rationalizes the place.

3. A secondary note – between UHIP and Eleanor Slater, was Allan Fung just when he proposed the dismantling of EOHHS in 2018?

4. Rhode Island already has five expected candidates for the Democratic nomination for governor next year: Dan McKee, Nellie gorbea, Seth Magazine, Jorge Elorza and Luis Daniel Muñoz. Could Matte Brown make six? So far, Brown has not spoken about his plans: he has not responded to several calls and messages over the past week and a half. But the former secretary of state’s future is a growing topic of conversation in political circles amid a growing buzz he may be looking to try again after his main 2018 loss to Gina Raimondo. Brown has been closely involved in recent efforts to create new left-wing political groups in Rhode Island, such as the Rhode Island Political Cooperative and Renew Rhode Island, which could give him a first base of support if he did come forward.

5. The July 1 press release extolling Day Pitney LLP’s acquisition of the law firm Howland Evangelista Kohlenberg LLP included a somewhat out of nowhere quote. Nellie gorbea. “This merger is indicative of how Rhode Island is emerging as a hotbed for forward-thinking businesses committed to the economic development of our state, as is my office,” said Gorbea. How did this comment end in there? According to a spokesperson, Gorbea knows one of the partners involved – Renée AR Evangelista – and was invited to contribute to the citation.

6. An eye on the Congress… Jack reed will begin the biggest undertaking of his first term as Chairman of the Armed Services Committee on July 19 when he launches the NDAA markup… Sheldon White House was pushed back by pundits on his bipartisan bill to allow businesses to counter attack hackers … after marching in the 4th of July parade in Bristol, David Cicillin flew to Israel for the week as part of a bipartisan delegation … Jim langevin expressed frustration at the slow pace of Senate cybersecurity confirmations amid a wave of ransomware attacks … Jake auchincloss got the biggest left-handed television projector with a hit on Rachel Maddow’s program talk about helping Afghan interpreters … Axios reports Bill keating will be holding a fundraising retreat on Nantucket this summer.

8. It may have been a four day work week, but it probably wasn’t for our Providence Town Hall reporter, Steph machado, whose pace was full of news all week. A quick overview: the municipal councilor Carmen Castillo was charged in a hit-and-run accident… the city council finance committee unveiled and approved a $ 540 million budget plan… following last week’s incident on Sayles Street… and Jorge Elorza struggle Dan McKee and the Providence Teachers Union on Achievement First plans to use a school building in South Providence.

9. If you always dip your toes back into society after being vaccinated, here’s a good excuse to go out: Providence Restaurant Week starts Sunday and ends July 24. Greg Desrosiers reports that nearly 40 restaurants are participating this year – not only in the capital, but also in Cranston, East Greenwich, Johnston, Lincoln, Pawtucket, Smithfield, Tiverton, Warren and Warwick. More information, including a full list of participating restaurants, is available at ProvidenceRestaurantWeeks.com.

11. My colleague Tolly taylor ended up making quite a fuss on Thursday, finding out why Mayor Polisena told lawmakers that firefighters could stop transporting patients to certain hospitals because of their doctors’ testimony against a bill to overhaul the state’s ambulance regulations. (Common cause Jean Marion says the bill, now on the governor’s desk, is unconstitutional.) This is another episode in a long-running saga, as a former Public’s Radio columnist Scott MacKay noted in a 2019 article on Polisena’s fury against a Lynn arditi investigation into poor quality work of paramedics.

12. What is happening with the Lifespan-Care New England merger? The two sides continue to speak little publicly, although it is clear that the leaders have concerns about the trajectory they are on, given that they have pitched the idea of ​​a COPA to key lawmakers. And while hospital executives dismissed suggestions that they would run into significant antitrust issues with the Federal Trade Commission, that’s even harder to believe given President Biden just signed an executive order on Friday urging the FTC to step up its commitment to competition and its opposition to monopolies. (Ironically, Gina Raimondo – a supporter of the Lifespan-CNE deal – stood behind Biden as he put his signature on the order.) Closer to Home, Health Insurance Commissioner Patrick tigue released a discussion paper warning policy makers of the deal’s many potential pitfalls.

13. Fall River is ready for a big mayoral contest, with the president of the city council Ponte cliff officially announcing Wednesday that he will challenge the holder of the first term Paul Coogan this autumn. I ran into the former mayor Sam sutter the next day, and Sutter told me he expects a competitive race to lead Spindle City. (Will be Jasiel correia endorse?)

14. Can New Bedford finally keep years of political promises about an economic boom in offshore wind? Bristol Community College hopes to do its part by opening a National Offshore Wind Institute on the seafront to train workers. I joined elected officials for a tour of the establishment this week. (Senator Markey hinted at the press conference that a major announcement could come in a few days regarding the big Vineyard Wind project.)

15. Speaking of New Bedford, Mayor Mitchell is not happy with Governor Baker for snubbing the city’s commercial scallops when Baker made his choice for a key federal fisheries panel.

16. The closure of the Brayton Point power station is still shaking up the city of Somerset.

17. A tonic Atlantic essay on how human knowledge is threatened by the decay of web links.

18. Jack shafer has a thoughtful column on the debate over media coverage of crime.

19. The philosopher Epictetus has 2,000-year-old tips for surviving modern life.

20. Configure your DVRs: this week on Newsmakers – Speaker Shekarchi, plus a round table of journalists. Watch Sundays at 5:30 a.m. on WPRI 12 or 10 a.m. on Fox Providence, or tune in to the radio Sundays at 6 p.m. on WPRO. See you here next Saturday morning.