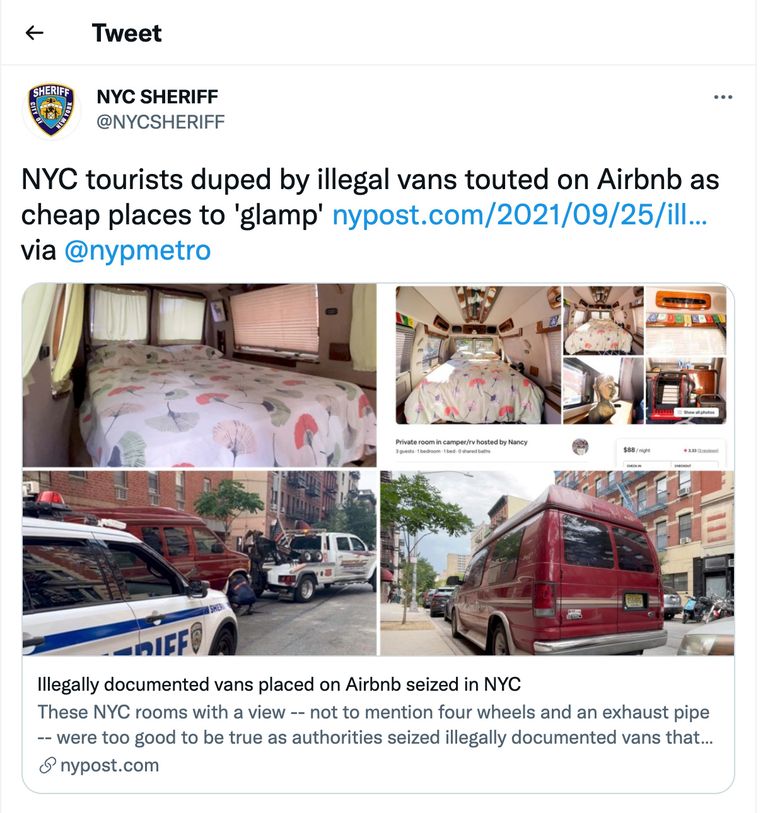 The mayor of New York City shared photos of the towed vans on social media as part of his “operating room service.” All are parked in East Village and Chelsea, with their New Jersey license plates, ABC7 New York reports.

To tow the car, the police gave an expired license plate – in one case it was not valid for 15 years. There was also a waiting ticket waiting for $ 1,500 (approximately 1,300 euros) in a truck.

However, this is not the way the police proceeded: Investigators discovered the trucks with a YouTube review of one of the trucks, which stated that an overnight stay cost $ 97 (around € 84).

So trucks were much cheaper than staying in a hotel, but visitors had to go without a toilet. One of the real estate agencies, Nancy, cleverly solved this problem: Using advertising, she compiled a list of the restrooms in the neighborhood, for example at Starbucks.

The YouTube video reviewer thought the truck was a “fun experience”, but he also saw drawbacks – plus there was no toilet. He found it rather noisy as people walked past the bus. He thought getting out of the truck in the morning without washing was uncomfortable.

His conclusion: The stay was a “unique experience”, but he would not do it again.

Besides, this is no longer possible. According to Airbnb, truck rentals are no longer active on the platform.

UkraineFriends.org works with Airbnb.org to evacuate and house refugees fleeing…

Airbnb hosts explain what it takes to list a rental, from doing good with neighbors…