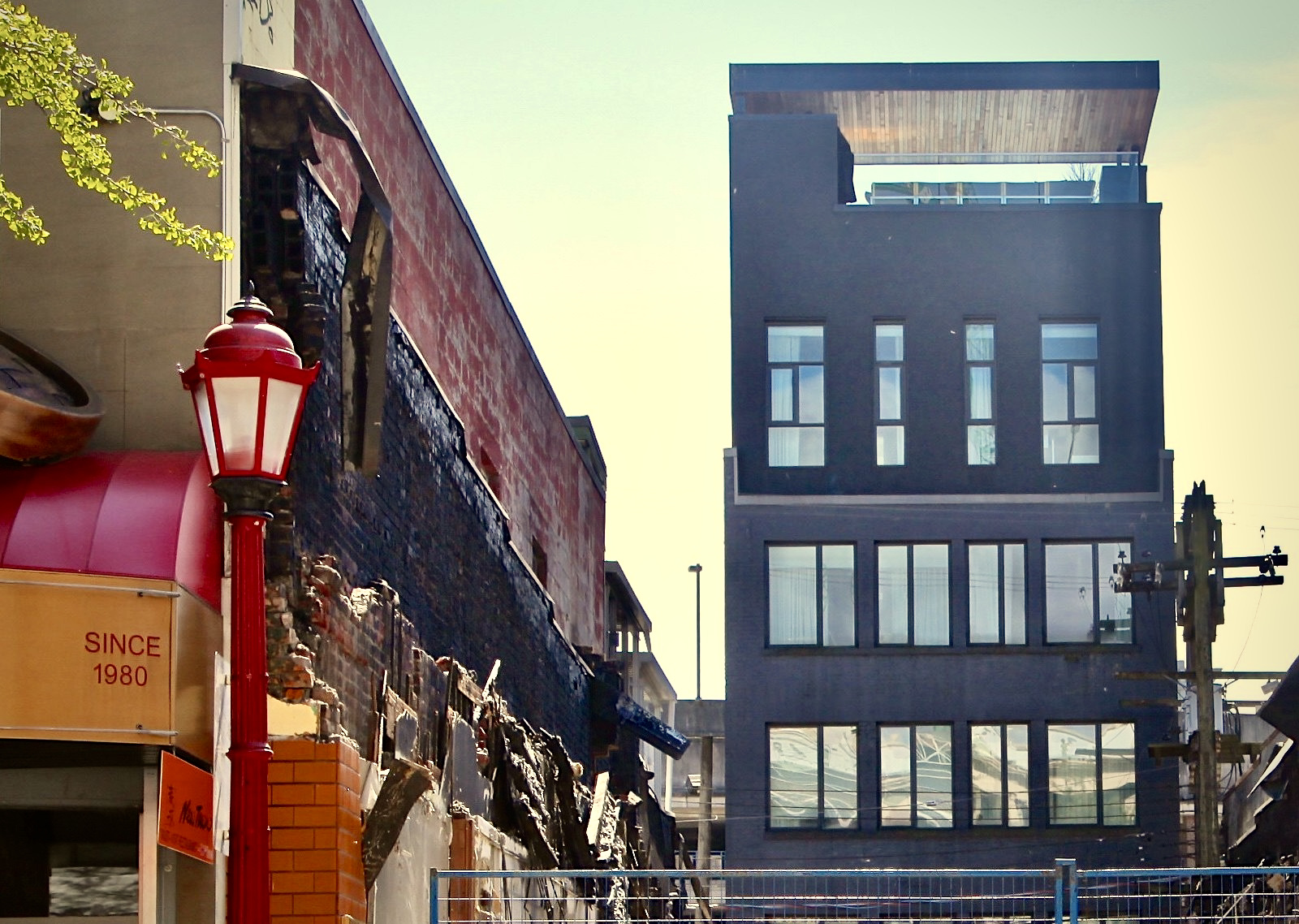 Tea & Two Slices is a longtime local news report from NEEDS leader and veteran dishwasher Sean Orr, who lives and works in Gastown, deeply aware of his privilege.

Here we go again: “It’s like a war zone”: Chinatown businesses say crisis on the ground needs urgent resolution. War zone is right, and it’s a class war fought by developers and all-corporate sycophantic media. I’m so fed up that the local news keeps ignoring the root causes of poverty. The system is not broken. It works as expected, but it needs cheerleaders like Global to constantly make us angry because the poor exist. They never present Why they exist. By describing Chinatown as a wasteland, it simultaneously relieves its stakeholders of all responsibility while paving the way for massive gentrification and even MORE displacement.

It’s a lazy and shocking sensationalist distraction policy that ignores the fact that crime is not even up. It ignores decades of austerity and displacement. It ignores decades of neglect and a criminal lack of support for mental health, disabilities and addicts during a poisoning epidemic. He ignores all the amazing legal street art in the community and of course he ignores some bloated and ineffective VPD that criminalizes poverty and puts up billboards to scare each other off.

Chinatown is on life support because of landlords scamming tenants with ridiculous triple net leases and high commercial property taxes (because landlords have nervous breakdowns every time we try to transfer them to them). The media will do anything to protect the status quo. To witness it:

Meanwhile: Vancouver police notice board on distraction theft already vandalized. I swear the VPD put this billboard here knowing it would be vandalized to say, “We need more money because of the vandalism.” Besides, I prefer make my own version. Update: It has been replaced by a Tagalog version, to which I say “Lahat ng Mga Pulis Ay Mga Bastard”.

Just the city of Vancouver fencing off the crab park, the only beach in downtown is, days before another thermal dome started. pic.twitter.com/gNF5l06lUL

The port of Dubai Vancouver has too much power. Makes this project even more precarious: Will an Indigenous healing center finally find a home on Vancouver’s waterfront? The number of people who don’t know that CRAB Park only exists because of a protest camp could fill an empty condo tower.

You can literally see the inequalities in Vancouver from space:

Of course, when your political culture is infected with the rhetoric of personal responsibility (which ignores the very real structural limitations imposed by neoliberalism), every so-called crisis becomes an exercise in public relations and partisanship: If the opioid crisis is a public health emergency, British Columbia should treat it as a. But then how can the VPD continue to harass the poor?

… And musicians. This guy was arrested for putting on a free show. Do you hate preachers advocating the torture of homosexuals? No problem. Hundreds of anti-maskers gather in violation of health laws? No problem. Anti-trans fanatics marching in Vancouver? Here is an escort. Play music without a license? Throw that fucking kid in jail.

Are you trying to do your job and report on the destruction of old growth forests? No: Victory! Media coalition wins legal battle with RCMP. Good news, but the RCMP will continue to do this, block our courts and arrest land defenders.

Perhaps it is time we stopped using the term “old stand”. It looks like an onion you’ve been neglecting for a decade: UBCIC statement on protecting our old trees.

Employers struggle to hire – and some accuse CERB and other government programs of spoiling workers. Ah yes, let’s blame a program that ended 10 months ago and not the fact that you were paying a pittance.

Meanwhile, many of these employers have taken government grants and lined their pockets: FP survey: As SSUC poured in, dividends poured in.

But what do you expect from the cult of death known as late capitalism? Lifting moratoriums on evictions resulted in more than 10,000 COVID deaths.

Or you know you could not go on a cruise: Mixed vaccines could prevent British Columbians from cruising. Who Said Baby Boomers Have Rights? Ah okay me. Every week.

Speaking of law: COVID-19 in British Columbia: Less than 5% of cases involve fully vaccinated people, officials say. You know, I would love to be like, “Fuck those selfish assholes. Let them suffer ”, but that would ignore the fact that hardly anyone under the age of 12 has been fully immunized.

Hope you all liked this cheap pandemic rent: Rents planned for Metro Vancouver as Canada prepares to reopen borders. And who will bear the brunt of this anger? Immigrants and international students, instead of greedy landlords and a lack of vacation control.

Which we have just voted to relax: Affordability vote says a lot about Vancouver politics. Being held hostage by developers to get projects into the pipeline on one side and being blocked by NIMBYs from all angles on the other. This election is going to be hot, especially if Hardwick short … you know, the person who didn’t know his 3,471 abstentions were actually vote in favor.

As the next election approaches, voters will need to take a close look at the platforms. The choice will be between candidates who believe that relying on the market to add more and more housing supply is the way of salvation against those who are skeptical of this approach.

I take back everything I said bad about the media: Pickup Trucks are a Plague on Canadian Streets. My god, the feedback was priceless. Like, my brother, if you use your truck for your job, this article is not about you. These are all the posers making up for their tiny dicks and midlife seizures by buying immaculate 7ft tall behemoths that fetishize the working class. You know, the guys who watch Ice Road Truckers, have 23 AirBnb units, and think it’s funny buying Lucky Lager when they can afford Louis XIII.

I think we can all understand: Penniless: why a man from Victoria went two decades without money.

Airbnb guest makes ‘terrible’ discovery after checking into his rental in…