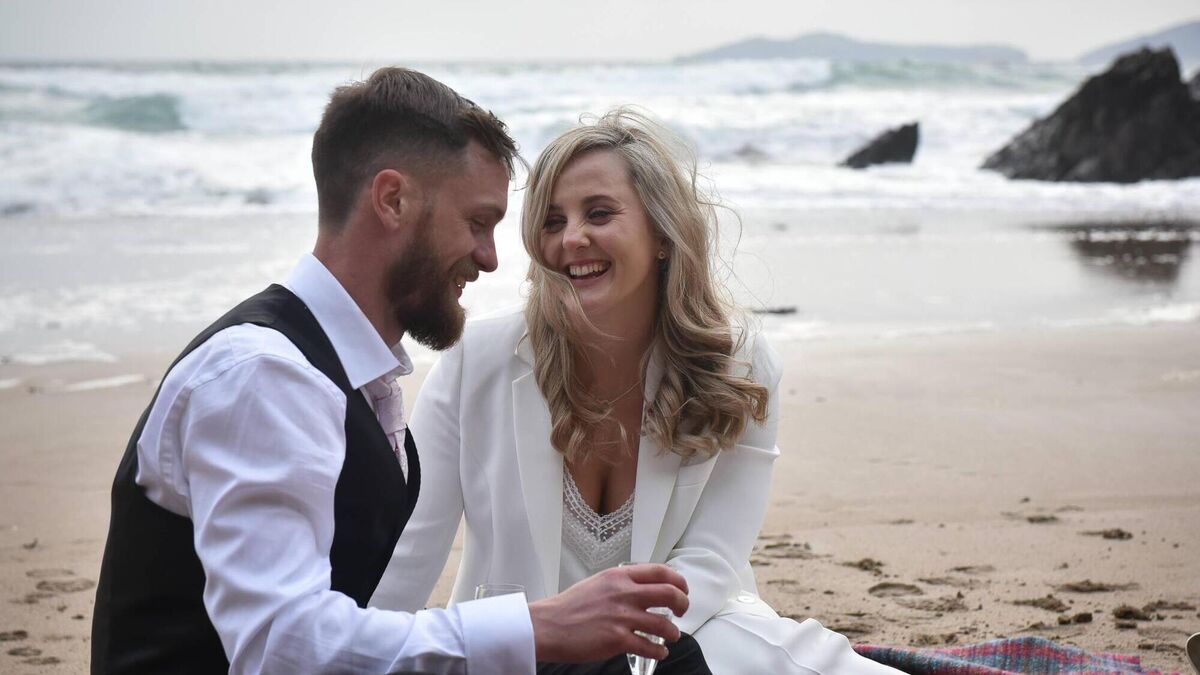 Original wedding date and surprise video for Aoife and Seán

How do you get around the difficult decision to reduce a large guest list to literally single digits to comply with pandemic restrictions?

They had dreamed of a traditional-style wedding surrounded by loved ones, but when the pandemic made that impossible, Aoife O’Leary and Seán Lacey still decided to exchange their vows on their original date.

The church ceremony and reception was scheduled to take place in Dingle, County Kerry in March 2021. “We originally planned a big wedding with all of our family and friends,” Aoife said, of Rathmore, County Kerry. “In January 2021, we decided to postpone the wedding reception until 2022, but since we really wanted to get married the day we left, we decided to go ahead with the church anyway.”

What about making the difficult decision to reduce the numbers to single digits? “Instead of trying to pick six guests, we decided not to have any – all of our loved ones got to watch us get married on the church livestream,” the bride said. “Our family and friends were so supportive of our decision.”

Aoife and Seán, from Glenflesk, County Kerry, were married on March 6 at St Mary’s Church, Dingle, by Father Michael Moynihan.

They have postponed their reception until next year, when they will return to the west – this time with a large entourage – for the celebration, which will take place at the Dingle Skellig Hotel.

“We chose Dingle simply because we really wanted to get married by the ocean and the Dingle Skellig Hotel overlooks the water,” said the bride.

Aoife and Seán got engaged at Lynn Canyon Park in Vancouver in 2019. “We were living in Vancouver when Seán proposed. Even though we had been together for a long time, I really didn’t expect it at all. I had such a shock. Vancouver will always have a special place in our hearts for this reason, ”said Aoife. “We also lived in Sydney, Australia for a few years. “

And what was their marriage like? “Our day was incredibly special and so cold,” said the bride.

Aoife looked super chic in a white wedding suit from Whistles and Seán bought his suit from Moss Bros. “I decided to save my dress for next year,” she said.

Maura’s Cottage Flowers, Tralee, created the flower arrangements and during the ceremony, musical duo Geallta, featuring a harpist and violinist, performed. “It was a highlight of the day. It made the ceremony so special and all of our guests who watched online were blown away by their talent, ”said Aoife.

Dingle photographer Elaine Kennedy then took the newlyweds around Slea Head for a photoshoot that took several scenic spots including Dunquin and Coumeenoole Beach.

“It was such a beautiful sunny day, which we did not expect at all. We had plenty of time to go around Slea Head and take photos as we weren’t rushing for a reception, ”Aoife said.

“Then we stayed in a wonderful Airbnb where we had a panoramic view of Dingle. My sister and bridesmaid, Alanna, asked all of our family and friends to make a short video wishing us good luck, and she sent it to me when we got out of church. It was an incredible surprise to be obtained.

Aoife, an English teacher working in the higher education sector, and Seán, a pipe welder, live in Rathmore.