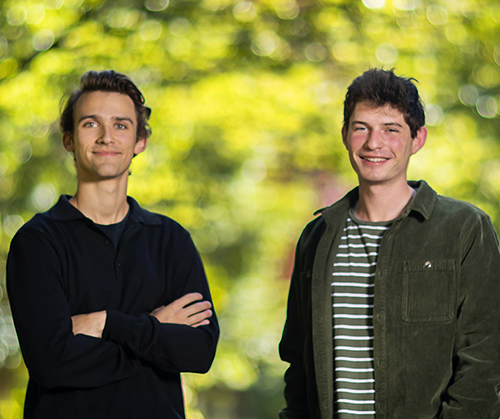 It was towards the end of their 7,300-mile journey through 23 states, in an effort to interview young adults about how the pandemic has changed their lives, when the two University of Pennsylvania students were faced with a decision: Should they go to the top prom in Circleville, Utah?

Yes, they did so at the invitation of a local farming family, joining most of the city, 600 residents, this spring evening. The ball was one of dozens of unexpected experiences shared by Penn seniors Max Strickberger and Alan Jinich, Penn’s best friends and roommates who grew up on the same street in Chevy Chase, Md., During their journalistic activity.

They have scoured the country searching for the stories of a wide range of people, ages 18 to 25, to create a record of the pandemic experience. The website resulting from this archive, Generation Pandemic, will feature some 20 1,500-word oral history stories and podcasts drawn from the interviews, photos and videos they gathered on their trip. They also have a Generation Pandemic Instagram page.

Mr. Strickberger is a major in English with a concentration in Creative Writing and Mr. Jinich a major in Neuroscience and a minor in English. Both, from the College of Arts and Sciences, are back on campus this fall for their final year. Faced with another semester of virtual classes last spring, they decided to take their chances and withdraw the semester from their Penn classes to continue their Generation Pandemic project. But they prepared with Penn’s professors and stayed in touch with them throughout the process.

“I wanted to do something. I felt like I was living in history and wanted the chance to capture some of it or play a more meaningful role in what history was for me and for people our age ”, Mr Strickberger said.

Mr Jinich, a photographer, said he wants to pursue a long-term creative project and get out of the bubble of reading everything on his phone screen. “We wanted to work on something together, so we decided, just two weeks before the spring semester started, to pull it out and take on this project,” Jinich said.

Mr. Jinich had taken Dr. Peiss’ course, Modern American Culture, and she agreed to collaborate on this project, creating an eight-week reading program and meeting with them almost once a week. They have read several classics and recent writings, including Studs Terkel’s Working books, first-person interviews with various workers in the 1970s, and Hard Times, first-person accounts of everyday life during the Great Depression. . “We wanted to do this kind of oral history with personal accounts, but specific to our age and the pandemic,” Strickberger said. “We wanted people’s stories to speak for themselves.

Dr Peiss said she chose readings to help them think about how to position themselves as interviewers, relate to new people and places, and deal with their own assumptions. They also often chatted with Dr. Cloutier, who taught Mr. Strickberger in his Jack Kerouac & Postwar Counterculture and Post 45 American Literature & Film courses.

“I see Kerouac and Beat Generation tendrils in Max and Alan’s project,” said Dr Cloutier. “They are joining forces to try to understand and diagnose a point in time for a certain generation. And of course, they go on the road, they are looking for real encounters.

Mr. Strickberger and Mr. Jinich had taken a creative writing class, Extreme Noticing, taught by Mr. Apple, who suggested they read Eli Saslow’s column in the Washington Post, “Voices from the Pandemic”. “We read it and realized this was exactly what we wanted to emulate,” Strickberger said. “We wanted to do more serious interviews that were not just a snippet of someone’s life, but a more sustained engagement with what was happening at a particular time in the pandemic.”

They used a demographic GIS map, Social Explorer, to determine a route showing geographic and socio-economic diversity, through the Deep South, west through the Rockies, and through the Midwest.

The couple left on April 8, both fully vaccinated against COVID-19, behind the wheel of Mr. Jinich’s mother’s SUV, with a plan to stay with friends and family in combination with Airbnbs and car camping. . The first week was loosely planned, and the rest rolled out. On the first day, they traveled to Chattanooga, Tennessee, and conducted their first three interviews, arranged in advance by a friend of Penn’s. But after that, they would go to a new location and start asking strangers who appeared to be the same age range if they would be up for interview.

“I would basically say ‘Hi, my name is Max. I am working on an oral history project, I speak to young people from all over the country. We have just entered the region. We would love to have you take the time to talk to us. ‘ Said Mr. Strickberger. “And they would tell us no, or yes, or I can but not at the moment, or I’m not in that age group but try the church down the street, or the hotel, or the grocery store. . “

The first big test took place in Greensboro, Alabama, a town of about 2,500 residents. No one wanted to talk to them, but the manager of a grocery store agreed to help and walked the aisles asking people their ages and introducing them.

Their goal was to get a total of 50 interviews in six weeks, and they conducted 80 of them, some as short as 15 minutes and others for several hours, the average being around an hour and a half. They conducted most of the interviews together, but frequently separated and conducted interviews with the interviewees on their own. Continuing the story of Jesus, a cattle rancher on the Texas-Mexico border, Mr. Jinich’s interviews lasted for several days.

They asked each person to write in a notebook the answer to the question, “After the pandemic, I want …” Mr. Strickberger said he had the idea of ​​a conversation with novelist Jennifer Egan at the subject of the project.

The couple spoke with Ms Egan the day before the trip. “She got us interested in this about the future, looking to the future,” Mr. Strickberger said. “We asked each person we interviewed to fill in the blank, in their own handwriting. We wanted something tactile, something more physical that way. And that ended up being a really meaningful part, seeing young people write while imagining what life would be like after the pandemic. “

Dr Peiss said this type of first-person record is important for historians. “I think an archiving and interviewing project like this will be reviewed decades from now,” she said. “We’re going to want to know what that time was like, just like people in the 1930s were trying to understand the Great Depression by interviewing people, photographing them, and creating a recording of that experience that we still rely on today. ”

At first, they decided not to seek interviews with full-time students like themselves, and instead looked for people who represented other experiences. Some stories they didn’t realize they needed until they found them, like Faith, a woman they met in Utah who told them she was the first person to his county to contract COVID-19. “She spoke with us about being treated like an outcast, about the way rumors were spreading about her family and herself in this small town,” Mr. Strickberger said. “Once she got out of quarantine, everyone stayed away until the sheriff gave her a hug.”

They visited many small towns, but also several towns. In Chicago, they were rejected by everyone they approached in Chinatown. “Then all of a sudden I hear this guy on the street speaking Spanish,” Mr. Jinich said. “So I started talking to him in Spanish and we just bonded as Mexicans. I started interviewing him about his job and it ended up being my favorite story of the whole trip. de Fernando was one of many interviews Mr. Jinich conducted in Spanish, his mother tongue.

One of the most powerful talks was with Sharon, a young woman from Santa Fe, New Mexico, who returned to live with her mother and older brother and baby during the pandemic, struggling to help them while trying to attend university courses. Her brother was addicted to heroin and her mother, who did not speak English, was trying to navigate the court system for custody of the baby.

The couple returned to Philadelphia on May 17, the day Penn launched, and reconnected with many of their friends. Over the summer, they edited the stories and photos, working with Penn’s alumnus Daniel Fradin to create their website.

As they settle into their final year at Penn, they continue their work on the Generation Pandemic archives. Dr Cloutier sees several possibilities. “Who knows how that will creep in for them in the long run: exhibitions, photographs, maybe non-fiction on the road? Maybe even a novel based on these experiences? Perhaps an archive that will continue to inspire others and launch new initiatives? ” he said. “Who knows? It’s exciting.”

Adapted from a Penn Today article by Louisa Shepard, October 11, 2021.

Hoilett, Rinomhota and Tetek – Reading the latest news and first team news ahead of Blackpool