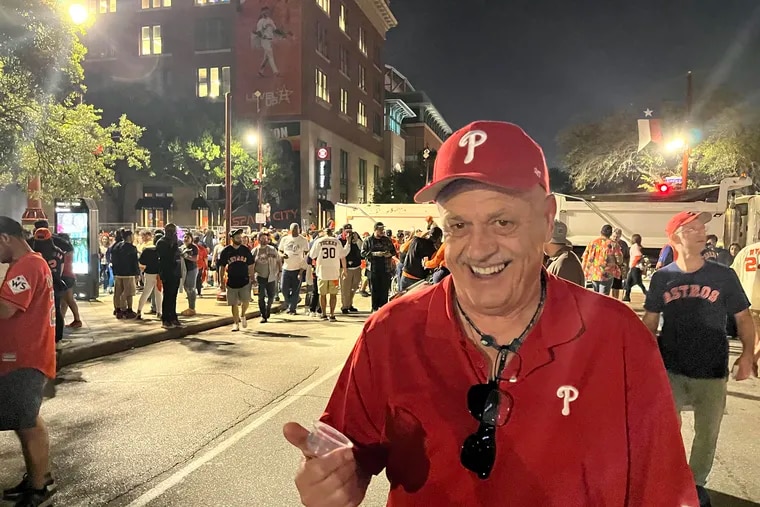 HOUSTON — A saxophonist stood atop an electrical box at the corner of Preston and Crawford streets Saturday night, playing a familiar song that was both comforting and cruel in this unfamiliar place.

It was “Gonna Fly Now” from Rockythe film from which, for better or for worse, we will never shake.

Most Houston fans didn’t notice, too busy chanting “Let’s go Astros” or talking to local television reporters posted on the sidewalk. A few shadowboxed the air beneath him. The song was meant to twist the knife of a World Series Game 6 lossand although most Phillies fans left Minute Maid Park heartbroken, they also found some hope in the loss.

They can’t wait for the sequel.

“If you had told me six months ago that we would be playing deep into a World Series with this team, I would have told you you are crazy,” said Mark Curtin, 45, of Glen Mills. “There’s going to be a lot of optimism for this team next year.”

“We got to watch the Union game a bit when we got here,” Gillespie said. “But for it to end like this…”

Not all fans were just happy the Phillies got this far. It’s too difficult, too rare, to get into a championship round, to let it slip away. They questioned everything.

“[Zack] Wheeler had his back against the wall, but why are you keeping him? said Brian McGonigal of Mantua, referring to manager Rob Thomson pulling his starter out in the sixth inning, which many thought was a mistake. “It’s the last game. You lose and you go home.

Outside the stadium, Houston fans filled the streets, doing burnouts in cars and waving towels on balconies. Most Philadelphia fans passed by, returning to their hotels, trying to ignore it.

“I congratulate this team on this win,” said Port Richmond resident Mike Slavin. “Most of these people were nice to me. There were a few goons.

Joel and James John, brothers from Northeast Philadelphia who now live in Los Angeles, said they were returning to their Airbnb to change their Phillies and Eagles gear before returning to the orange and navy melee of fans.

Fans shouted “Go home, Philly” as they walked past them. A man who had had too much fun stumbled, muttering “end of season” before walking away.

Like many Philadelphia fans at the game, the Johns had flown to Houston to watch the Eagles beat the Houston Texans on Thursday night. Amid all the din after Saturday night’s baseball game — car horns and screeching tires, and that saxophone — the occasional “Go, Birds” made its way through the crowd. For some, it eased the pain. They are 8-0, after all, the only undefeated team in the National Football League.

“We came here for the Birds and we were blown away,” said Philadelphia resident Danny Clauss. “It’s really encouraging to have the Eagles still going. You’ll wake up with something to look forward to.

Philadelphians are used to losing, said his cousin, Tim Clauss. We can take the hit. In fact, the Clauss said they would likely stay on the streets of downtown Houston and accept the heckling of Astros worshipers. Like the song “Rocky”, this too would be familiar.

james “Philadelphia Sports Guy” Pagliei, his face painted in thin red stripes, strolled through the town center on Crawford Street, congratulating fans who approached him. The saxophonist played “We Are the Champions”.

“Obviously I’m disappointed,” he said. “But we weren’t supposed to be here today. They were a better team, with better shooting, with more timely strikes. They got a taste of what it’s like now, and it’s going to make them want to come back here next year. We’re talking about the Fightins.

” LEARN MORE: Todd Kalas, son of Phillies legend and Baseball Hall of Famer Harry Kalas, was born in Houston and lives there, playing for the Astros.

A Philadelphia man joined the party, walking slowly through the revelers with his cane in one hand and a Jello shot in the other.

“It’s about the celebration, the sport, you know,” said Mike Kern, 62, of Manayunk. “That’s what every fan wants.”

Kern had an Eagles tattoo on his forearm. He, too, went to both games in Houston. He was looking for a friend of his after the World Series, but the streets were crowded and Astros fans kept approaching him, with kindness and shooting.

“You did so much good,” said a man wearing a José Altuve shirt, before hugging him.

Kern told the man to enjoy the win.

” This is a beautiful city. People have been great,” he said after the fan left. “But that wouldn’t work in Philadelphia.”

How JAMES HETFIELD guided COMPLIANCE CORROSION in the late 90s