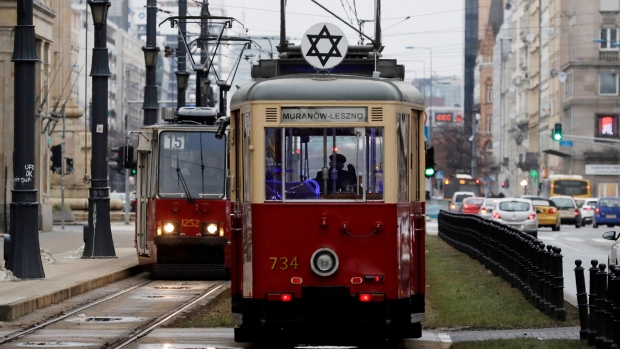 WARSAW – Poland defended planned changes to its property restitution regulations on Friday, after Israel said the reforms were “immoral” and would prevent Jews from claiming compensation or property seized during the Holocaust and the communist era.

The US State Department strongly criticized the changes and urged Poland to abandon them.

President of the World Jewish Congress Ronald S. Lauder strongly condemned the bill, calling it “a slap in the face of what remains of Polish Jewish community and survivors of Nazi brutality everywhere.” Justice.”

Lauder said the time has come for the “international Jewish community to reassess our relationship with a government that behaves with unimaginable harshness and emulates the worst traditions in Polish history rather than the best and most uplifting.”

Poland’s foreign ministry said the reforms were poorly understood and would not prevent restitution claims from being brought – as is currently the case – to the courts.

They “do not in any way restrict the possibility of bringing civil proceedings for damages, regardless of the nationality or origin of the plaintiff,” the ministry said.

The Israeli embassy had accused that the changes underway in parliament “would make it impossible” to return seized Jewish property.

He said they would also prevent Holocaust survivors and their heirs from seeking compensation. Poland was home to a vibrant Jewish community for many centuries, until the invasion of Nazi Germany in World War II.

“This immoral law will have a serious impact on relations between our countries,” the embassy said on Twitter.

The Polish Foreign Ministry replied that these comments “indicated a lack of knowledge of Polish facts and law”.

The United States has also slammed the legislation, with State Department spokesman Ned Price saying the changes were a “step in the wrong direction” while urging Poland “not to push this legislation forward” .

“We believe in the importance of addressing the Holocaust-era restitution issues to ensure fairness and equality for all victims,” Price wrote on his official Twitter account.

The changes were ordered in 2015 by Poland’s highest constitutional court and set a 30-year statute of limitations for challenges to administrative decisions issued by various offices in flagrant violation of the law.

They aim to put an end to fraud and irregularities in the restitution of property in Warsaw, Krakow and other cities and towns.

The rules apply to Jews and non-Jews. The constitutional court said they were needed to bring the regulations in line with the Polish supreme law and to give a delay to the restitution process.

In a vote Thursday evening, Polish lawmakers overwhelmingly backed the changes, which still need to be approved by the Senate and President Andrzej Duda before they can become law.

Before World War II, Poland was home to the largest Jewish community in Europe, with some 3.5 million people. Most were killed in the Holocaust during the occupation of Nazi Germany and their property was confiscated.

The post-war Communist authorities seized the property, as well as the property of non-Jewish owners in Warsaw and other cities. The end of communism in 1989 opened the doors to demands for restitution.

In 2001, a bill providing for compensation for seized private property was approved by parliament, but then President Aleksander Kwasniewski vetoed it, which said it violated equality principles. social and would harm Poland’s economic development, implying that compensation claims would result in massive payments.

He also said individual claims should be taken to court.

Poland is the only European country that has not offered any form of compensation for private property, including Jewish property, seized by the state in its recent history.

Only the remaining common Jewish properties, such as some synagogues, prayer houses and cemeteries, mostly in poor condition, have been returned, where possible, or compensated.