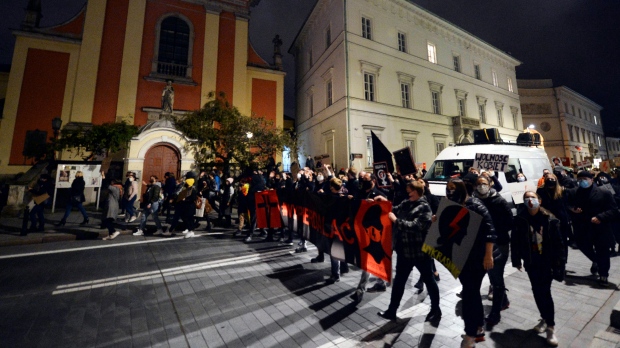 WARSAW, POLAND – Tens of thousands marched through Warsaw city center on Friday to the house of the leader of Poland’s ruling party in what women’s rights activists have predicted as the biggest protest ever in nine days of protests against an almost total ban on abortion in Poland.

There have been cases of far-right activists and football hooligans emerging from side streets and firing flares at people participating in the “March on Warsaw”. Warsaw police said they detained a dozen people.

However, much of the walk was carried out in a calm and even festive mood, with people dancing while the vans roared with music.

The protests were sparked by an Oct. 22 ruling by the Polish Constitutional Court that abortion for severe fetal defects is unconstitutional. The ruling further restricts what was already one of the most restrictive EU abortion laws.

Families with children took part in the march very early on, most of them joining young and even teenage protesters who chanted slogans calling for the resignation of the government and women’s freedom of choice. Many carried homemade cardboard signs, many serious, others playful.

A car accompanying the motorcade had signs on its windows that read, “I wish I could cancel my government” and “Even Shrek wouldn’t want to live in such a swamp.”

Many also chanted obscenities against the Conservative government, in what has been a hallmark of the nine days of street protest.

As in previous days, protests also took place in other Polish cities.

The march headed for the house of ruling right-wing party leader Jaroslaw Kaczynski, but police blocked the street some distance from the house. It was not clear if Kaczynski was at home.

He is the most powerful politician in the country although he only has the government role of Deputy Prime Minister. He has long supported a total ban on abortion and is now criticized for being behind the court ruling, handed down by partisan loyalties.

“Kaczynski set Poland on fire,” said a sign held up at the protest in Warsaw.

The national prosecutor threatened to indict the organizers of the demonstration for “provoking an epidemiological threat”, a charge carrying a prison sentence of up to eight years.

Klementyna Suchanow, one of the main organizers of the Polish women’s strike initiative, said she and many others refuse to be deterred by the virus or the authorities because they believe they are fighting for a right fundamental.

“It is about the freedom and dignity of people,” Suchanow said. “The willingness of people to protest should be a lesson for anyone who wants to impose authoritarian ways. “

The Polish abortion law was coined by political and Catholic Church leaders in 1993. It only allowed abortion in cases of fetal malformations, risk to the health of the woman and resulting pregnancies. of crimes – incest or rape.

The recent ruling leaves only the woman’s health or pregnancy resulting from crimes as legal grounds for abortion.

Previous attempts by the ruling Conservative Party to change the law banning all abortions have also sparked huge street protests, most notably in 2016 and 2017.

This time around, Kaczynski appears to have calculated that he could change the law with less reaction by getting a court under his control to do so during the pandemic. If so, the plan has backfired for now, although it is not yet known how long the protests will keep their momentum going.

The protests included people disrupting church services and spray-painted slogans on churches last Sunday. Such actions and vulgarity have offended many people in the largely Catholic nation, even some who disagree with the court ruling.

Kaczynski has since called on his supporters to defend churches.

Figures from the Ministry of Health show that 1,110 legal abortions were performed in Poland in 2019, mainly due to fetal malformations.

Monika Scislowska in Warsaw contributed to this report.