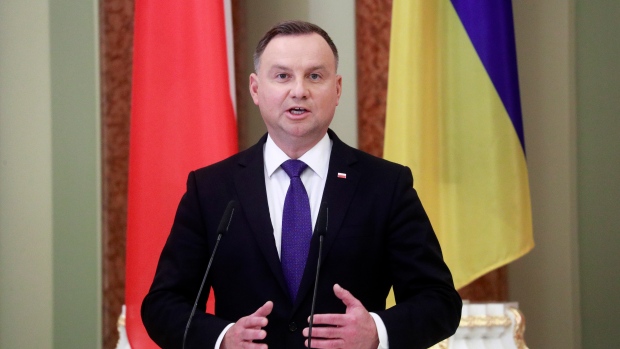 WARSAW, POLAND – Polish President Andrzej Duda said he was feeling well despite testing positive for the coronavirus, and he apologized on Saturday to anyone who needs to self-quarantine because they have been in contact with him.

Duda, 48, said in a recording posted on Twitter that he was not showing any symptoms of COVID-19 “but unfortunately the test result is absolutely unambiguous.”

“I would like to apologize to all who are exposed to quarantine procedures for meeting with me in recent days,” he said. “If I had had symptoms, believe me, all meetings would have been canceled.”

Duda’s diagnosis comes amid a huge increase in the number of new confirmed COVID-19 cases and virus-related deaths in Poland, a country of 38 million people that has seen very low infection rates in the country. spring.

The president’s main constitutional roles include directing foreign policy and signing legislation. But many of its functions are ceremonial, and most of the responsibility for running the country rests with the government of Prime Minister Mateusz Morawiecki.

Poland reported 13,628 new confirmed cases on Saturday and a record daily number of COVID-19 deaths, 179. The daily number of cases was the second highest in the country after a record number set on Friday.

Social tensions are also increasing in the country.

Police used tear gas on Saturday against protesters angry at the new virus restrictions, a group that includes entrepreneurs, far-right politicians, football fans and vaccine opponents. Protesters, many of whom wore no protective masks, violated a limit to public gatherings.

At the same time, people took to the streets of Warsaw and other cities for a third day to protest a Polish court ruling declaring unconstitutional abortions of fetuses with birth defects. The ruling further curtailed what was already one of Europe’s toughest abortion laws.

Critics accuse the right-wing ruling party in Poland of using cover for the pandemic and a court it has filled with loyalists to prevent access to abortion in a legally dubious way. They also accuse the Law and Justice Party of seeking to exacerbate social strife to distract from soaring COVID-19 infection rates.

The rapid spread of the virus is pushing the Polish healthcare system under strain to the breaking point. Doctors say patients are dying not only from COVID-19, but from other illnesses overwhelmed hospitals are unable to treat.

The government is preparing to open field hospitals, but it is unclear where it will find the doctors and nurses to staff them.

Duda visited the Warsaw National Stadium on Friday, which is being converted into one of the field hospitals. He also bestowed state honors on Friday to Iga Swiatek, the 19-year-old Polish tennis player who won the French Open this month, and her father and coach, Tomasz Swiatek.

Duda and the Swiateks wore masks and gloves but stood very close and shook hands as the president attached honorary pins to them.

Iga Swiatek said she and other members of her team were not showing any symptoms but would be quarantined after Duda tested positive. She said they are tested regularly and will be tested again in three days.

The Polish government has imposed new restrictions from Saturday that are just short of a lockdown in hopes of bringing the country’s outbreak under control. The Prime Minister called on the Poles to strictly respect these “serious restrictions” in order to protect lives.

The country currently has some 11,500 hospital patients with COVID-19 and 911 of them on ventilators, the health ministry said.