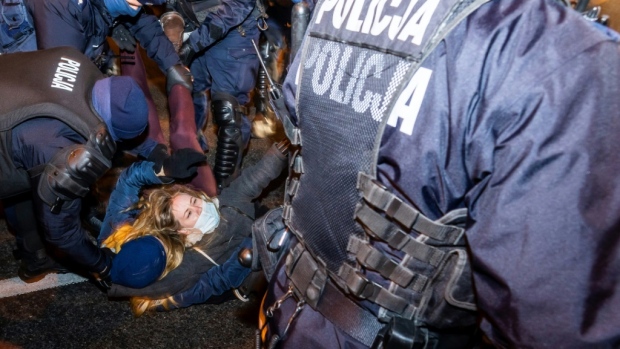 A controversial Polish court ruling that imposes a near-total abortion ban will take effect Wednesday, the country’s right-wing government said, in an announcement that took thousands to the streets.

This decision means that all abortions in Poland will be banned, except in cases of rape and incest and when the life or health of the mother is considered to be in danger.

“The decision will be published today in the Journal of Laws,” the government said on Twitter.

Many also brandished the red lightning symbol used by pro-choice activists as they stopped traffic.

There have been similar protests across Poland, defying coronavirus restrictions banning mass gatherings.

“Hell for the government”

The country was rocked by massive protests when the Constitutional Court’s verdict was first delivered in October, following a demand by members of the ultra-Catholic Law and Justice (PiS) party.

The Oct. 22 decision declared abortions for fetal abnormalities “inconsistent” with the constitution.

“Express your anger today as you see fit,” Marta Lempart, one of the main protest organizers of the Women’s Strike organization, said at a hastily-organized press conference following the government’s announcement. .

“We call on everyone to take to the streets,” she said, adding that the publication of the decision was “a crime”.

Klementyna Suchanow, another organizer of Women’s Strike, said: “All of Poland is mobilizing, not just in Warsaw. We are ready !

Suchanow and Lempart both wore green scarves – the symbol of abortion rights activists in Argentina, who legalized abortion last month in a historic gesture.

The protest in Warsaw started in front of the Constitutional Court and then moved towards the headquarters of the PiS party.

The predominantly Catholic Poland already has one of the most restrictive abortion laws in Europe.

There are fewer than 2,000 legal abortions each year and women’s groups estimate that an additional 200,000 women abort illegally or abroad.

Borys Budka, head of the opposition civic platform, said the publication of the decision was a “provocation”.

Wanda Nowicka of the Left Party tweeted: “You haven’t won this war against women yet and you won’t win.”

The government had delayed the release of the decision after nationwide protests staged in defiance of coronavirus restrictions banning gatherings.

The protests sparked by the abortion decision, many of which were led by teenagers, quickly became an expression of broader anti-government sentiment.

The biggest protests brought together tens of thousands of people in what organizers called a generational “revolution” against the status quo, including against the Polish Catholic hierarchy.

The government defended the verdict, saying it would end “eugenic abortions,” referring to the abortion of fetuses diagnosed with Down’s syndrome, but human rights groups said it would force women to have abortions. non-viable pregnancies.