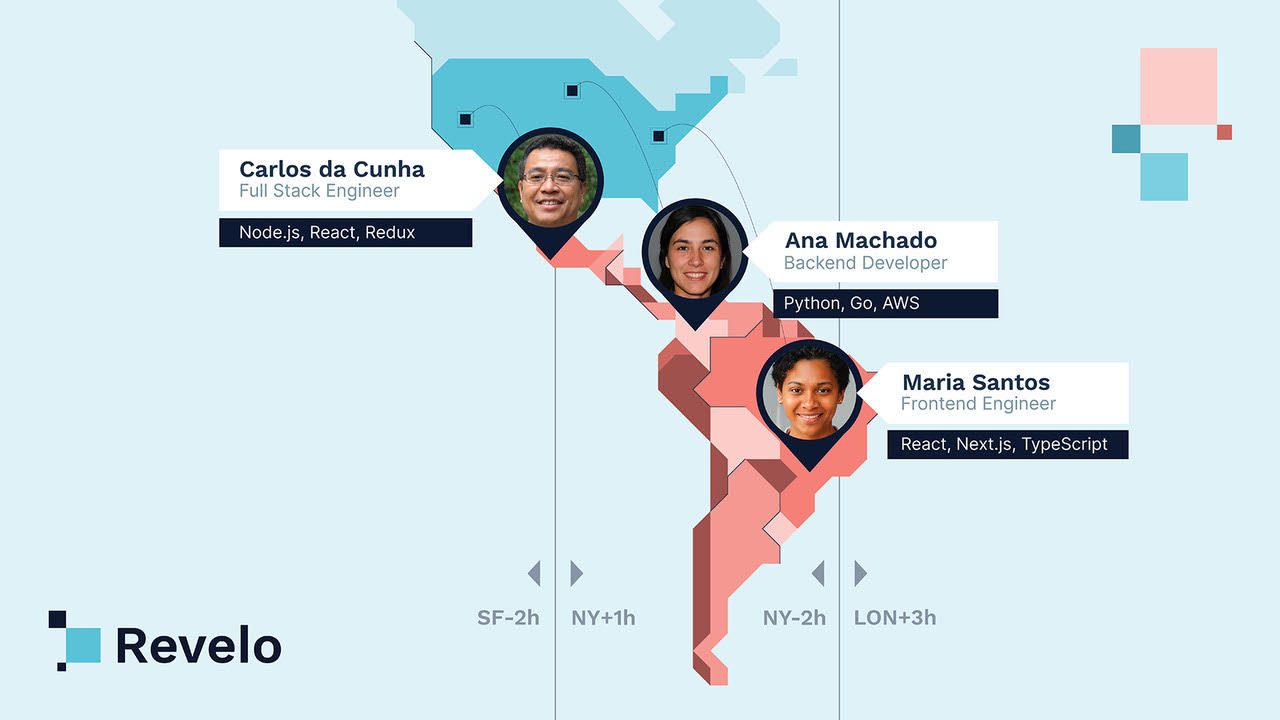 The pandemic has proven that talent is global. Employees can work from anywhere, while employers can tap into an international talent pool.

Well, that’s the theory at least. The practice is not so simple. Obstacles abound: from navigating financial systems and regulatory issues to cultural quirks and misunderstandings, setting up a cross-border business isn’t that simple.

Based in Miami Revelo eliminates the friction of hiring the best technical talent in Latin America. The company says its pool of 300,000 pre-approved technologists includes some of the best developers in the region.

For businesses, the benefits abound: that talent is aligned with US time zones, the hiring process is fast and smooth, and they don’t have to worry about payroll and compliance. There are also a wide range of talent benefits, including the fact that American companies offer higher compensation than their Latin American counterparts, while often offering more attractive projects.

Lachlan de Crespigny is the head of Revelo. The Australian native first landed in the Americas when he was a BCG consultant on assignment in Brazil. He then headed to New York to undertake an MBA at Columbia. “It was a really interesting time in technology,” said de Crespigny. Refresh Miami. “Uber and Airbnb were just starting to take over the world. And it became really clear that there was going to be a tidal wave of technology.

During the first conversations with its future co-founder, Lucas Mendes, de Crespigny began to realize that accompanying this technological boom would be a need for software talent. Spending time in Mendes’ home country of Brazil cemented the idea in their minds to build what would become Revelo.

The market has changed since 2015, when the duo founded Revelo, de Crespigny noted. “It’s really interesting how people have stopped thinking about going to Latin America to cut costs. Now they tell us their budget and ask us to find the top 10 candidates available for the position in question, regardless of where they live.

“The change is to move from thinking about costs to thinking about access to an additional 600 million people,” de Crespigny continued. “That’s led to a lot of success for a lot of these companies.” This reflects the exponential growth tech ecosystem in Latin America as a whole.

Revelo works with companies of all sizes – from startups to multinational corporations. Companies can hire a developer or an entire team. Their engineers can work in a wide variety of programming languages, including Python, React, JavaScript, and C++.

“That positive, business-friendly attitude is a truly magical thing,” he continued. While the team is fully remote, a handful of Revelo’s 300 employees are based in South Florida.

So far, Revelo has raised $33.7 million from a wide range of investors, including Social Capital, FJLabs, Valor Capital Group, and the World Bank’s IFC (International Finance Corporation). This funding was used to develop Revelo’s platform, which aims to fill knowledge worker positions much faster than traditional recruiters.

Going forward, de Crespigny said he’s excited to see the trend of remote hiring continue. He noted that many companies begin by hiring remote workers before hiring outside their home country and then internationally. “We can see a whole bunch of new companies hiring across the states,” he said. “Soon they will also start hiring in Mexico, Argentina and Brazil. It’s about to go mainstream.

I’m a Palm Beach-based tech researcher and writer passionate about sharing stories about South Florida’s tech ecosystem. I especially enjoy learning about GovTech startups, cutting-edge applications of artificial intelligence, and innovators who are leveraging technology to transform society for the better. Always open to locations via Twitter @rileywk or www.RileyKaminer.com.