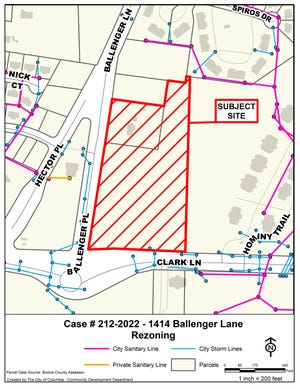 A myriad of restricted uses for land at the corner of Clark and Ballenger lanes in northeast Colombia were removed Thursday when the city’s Planning and Zoning Commission approved a rezoning.

The 10.8-acre lot has been transitioned from a planned neighborhood to a mixed-use neighborhood, eliminating some commercial development restrictions that were previously placed on the land in historic rezonings.

“Development here would improve the area’s services on a transit and pedestrian scale. It would serve the adjacent residential (area) to have a walkable commercial function instead of crossing all the way up Clark Lane in the both ways,” said Rusty Palmer, a planner with Columbia’s Community Development Division.

Previous development limitations lifted with the rezoning include indoor recreation or entertainment sites, such as a bowling alley; armories; research and development laboratories; trade schools; or personal services, such as laundromats or salons. These developments do not require an additional conditional use permit, therefore do not require Columbia City Council approval.

Other developments permitted under the rezoning that would require a conditional use permit include car washes or auto repair shops, meeting rooms, bars or nightclubs, halfway houses, and morgues. These would need City Council approval.

The owner of the land is Omkara LLC. In a filing with the Missouri Secretary of State’s office, the company’s primary focus is real estate development.

“The goal is to consolidate and eliminate split zoning where we have a parcel with multiple district regulations planned on it,” said Caleb Colbert, a Columbia attorney representing Omkara. “When we reviewed the site, we felt that MN (mixed-use neighborhood) was the most appropriate zoning classification.”

That someone would voluntarily choose a mixed-use neighborhood over mixed commercial land use at a transportation node is appreciated, said the commission’s Michael McMann.

An attempt to reach Colbert for confirmation of the use of that land was unsuccessful as of press time Friday.

“Staff do not believe the additional uses permitted by zoning would have significant impacts,” Palmer said. “The contextual residential density is relatively underserved.”

In other words, development on the land could benefit the neighborhood.

A preliminary plan is being sought for the acreage in the 7101 E. Richland Road area, comprising over 300 lots, potentially building 300 homes. The development would also lead to the northward extension of South Olivette Road. Large ponds on the grounds will remain.

“We’re working on some transportation issues,” Zenner said. “…This is an R-1 zone property and was annexed to the City of Columbia for some time.”

A working session Aug. 18 will include discussion of the sidewalk master plan and a likely vote on criteria for revising drive-thru and eliminating some city code zoning classifications.

September meetings will likely include discussions of short-term rentals, like AirBnB and Vrbo.

Charles Dunlap covers local government, community stories and other general topics for the Tribune. You can reach him at [email protected] or @CD_CDT on Twitter. Please consider subscribing to support vital local journalism.