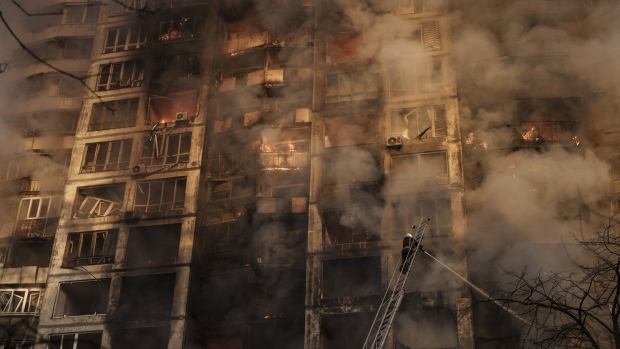 KYIV, UKRAINE – Ukraine has said it sees a possibility of compromise in talks with Russia despite Moscow’s intensified shelling of Kyiv on Tuesday and fresh attacks on the port city of Mariupol, from which around 20 000 civilians managed to flee through a humanitarian corridor.

The rapid developments on the diplomatic front and on the ground came as Russia’s invasion neared the three-week mark and the number of Ukrainians leaving the country amid the heaviest fighting in Europe since World War II exceeded 3 million.

After the Ukrainian and Russian delegations met again on video Tuesday, Ukrainian President Volodymyr Zelensky said early Wednesday that Russia’s demands were becoming “more realistic”. The two parties were due to speak again on Wednesday.

“Effort is still needed, it takes patience,” he said in his nightly video address to the nation. “All war ends with an agreement.”

Zelensky, who was scheduled to address the US Congress on Wednesday, thanked President Joe Biden and “all friends of Ukraine” for $13.6 billion in new support.

He called for more weapons and more sanctions to punish Russia, and reiterated his call to “close the skies over Ukraine to Russian missiles and planes”.

He said Russian forces were unable to penetrate deeper into Ukrainian territory on Tuesday, but continued their heavy shelling of towns.

Over the past day, 28,893 civilians were able to flee the fighting through nine humanitarian corridors, despite the Russians refusing to allow aid to Mariupol, he said.

In other developments, the leaders of three European Union countries – Poland, the Czech Republic and Slovenia – visited the beleaguered capital on Tuesday, arriving by train in a bold show of support amid the danger.

Meanwhile, large explosions thundered through kyiv before dawn following what Ukrainian authorities said were artillery strikes, as Russia’s bombardment of the capital seemed to become more systematic and closer. downtown, destroying apartments, a subway station and other civilian sites.

Zelensky said on Tuesday that barrages hit four multi-story buildings in the city and killed dozens of people. The strikes disrupted the relative calm that had returned after an initial advance by Moscow’s forces had been halted early in the war.

A senior US defense official, speaking on condition of anonymity to discuss the Pentagon’s assessment, said the Russians were using long-range fire to hit civilian targets inside Kyiv with increasing frequency, but that their ground forces were making little or no progress around the field. The official said Russian troops were still about 15 kilometers from the center of the capital.

The official said the United States has seen indications that Russia thinks it may need more troops or supplies than it has on hand in Ukraine, and is considering ways to get more resources into the country. The official did not elaborate.

In a statement that appeared to signal potential grounds for agreement with Moscow, Zelensky told European leaders meeting in London that he realized NATO had no intention of accepting Ukraine.

“We’ve heard for many years about open doors, but we’ve also heard that we can’t get into those doors,” he said. “It’s the truth, and we just have to accept it as it is.”

NATO does not admit nations with unsettled territorial disputes. Zelensky has repeatedly said in recent weeks that he realizes NATO will not offer Ukraine membership and that he could consider a neutral status for his country but that he needs strong security guarantees from the West and Russia.

The UN said nearly 700 civilians in Ukraine have been confirmed killed, with the true figure likely to be much higher.

Two journalists working for Fox News were killed when the vehicle they were traveling in was hit by fire on the outskirts of kyiv on Monday, the channel said. Fox identified the two as video reporter Pierre Zakrzewski and Ukrainian reporter Oleksandra “Sasha” Kuvshynova, who was helping Fox crews navigate the area. Another journalist was killed in Ukraine on Sunday.

New efforts to bring civilians to safety and provide aid were underway across the country. The Red Cross said it was working to evacuate people in about 70 buses from the northeast town of Sumy, near the Russian border.

The exodus from Mariupol marked the largest evacuation to date of the southern city of 430,000, where authorities say a week-long siege has killed more than 2,300 people and left residents struggling to food, water, heating and medicine. Bodies were buried in mass graves.

Kyrylo Tymoshenko, a senior aide to Zelensky, said around 20,000 people managed to leave Mariupol on Tuesday in 4,000 private vehicles through a designated safe corridor leading to the city of Zaporizhzhia.

On a day when thousands managed to leave Mariupol, Russian troops seized the city’s largest hospital, regional leader Pavlo Kyrylenko said. He said troops had forced around 400 people from nearby homes into the regional intensive care hospital and were using them and around 100 patients and staff as human shields by not allowing them to to leave.

Kyrylenko said the shelling had already severely damaged the main hospital building, but medical staff were treating patients in makeshift rooms in the basement.

Doctors from other hospitals in Mariupol made a video to tell the world about the horrors they saw. “We don’t want to be posthumous heroes and martyrs,” one woman said. She also said it was not enough to simply refer to people as injured: “it’s arms and legs ripped off, eyes gouged out, bodies ripped to shards, entrails falling out.”

Meanwhile, the Ukrainian army general staff said on Tuesday evening that Russian troops had launched a new assault on the strategically important city.

Fighting has intensified on the outskirts of kyiv in recent days and air raid sirens have sounded inside the capital. The mayor imposed a curfew until Thursday morning.

Tuesday’s artillery strikes hit the Svyatoshynskyi district in western Kyiv, adjacent to the suburb of Irpin, which has seen some of the worst fighting of the war.

Flames erupted from a 15-storey building and smoke choked the air as firefighters climbed ladders to rescue people. The assault blackened several floors of the building, tore a hole in the ground outside and blew out the windows of neighboring buildings. Rescuers said at least one person had been killed.

“Yesterday we put out a fire, today another. It’s very difficult, ”said a firefighter who only gave his first name, Andriy, outside the building, with tears in his eyes. “People are dying, and the worst thing is that children are dying. They haven’t lived their life and they’ve seen this before.”

City officials also tweeted an image of the blown-out facade of a downtown subway station that had been used as a bomb shelter and said trains would no longer stop at the station.

A 10-story apartment building in the Podilsky district of kyiv, north of the government district, was damaged. Russian forces also intensified their strikes overnight against Irpin and the northwestern suburbs of kyiv, Hostomel and Bucha, said the head of the capital region, Oleksiy Kuleba.

“Many streets have been turned into a mush of steel and concrete. People have been hiding in basements for weeks and are afraid to come out even for evacuations,” Kuleba told Ukrainian television.

In the east of the country, Russian forces launched more than 60 strikes overnight from Monday to Tuesday on Ukraine’s second city, Kharkiv, according to the head of the regional administration, Oleh Sinehubov. The strikes hit the historic center of the city, including the main market.

He said the bodies of dozens of civilians had been removed from destroyed buildings.

On Tuesday evening, Ukrainian forces repelled Russian troops attempting to storm Ukraine’s second-largest city, Kharkiv, from their positions in Piatykhatky, a suburb 15 kilometers north, the head of the regional administration, Oleh Sinehubov, on Telegram. He said Kharkiv’s defenders were able to “push the enemy beyond their previous position”, in what he described as a “shameful defeat” for Russia.

Associated Press writers Lolita C. Baldor in Washington, Raf Casert in Brussels and AP reporters around the world contributed to this report.

Do you have Ukrainian and Russian family members? How are you handling the crisis? E-mail [email protected]


This story has been corrected to show that Tuesday was the 20th day of the invasion, not the 21st.

The terrifying 80s nostalgia for a possible war with Russia