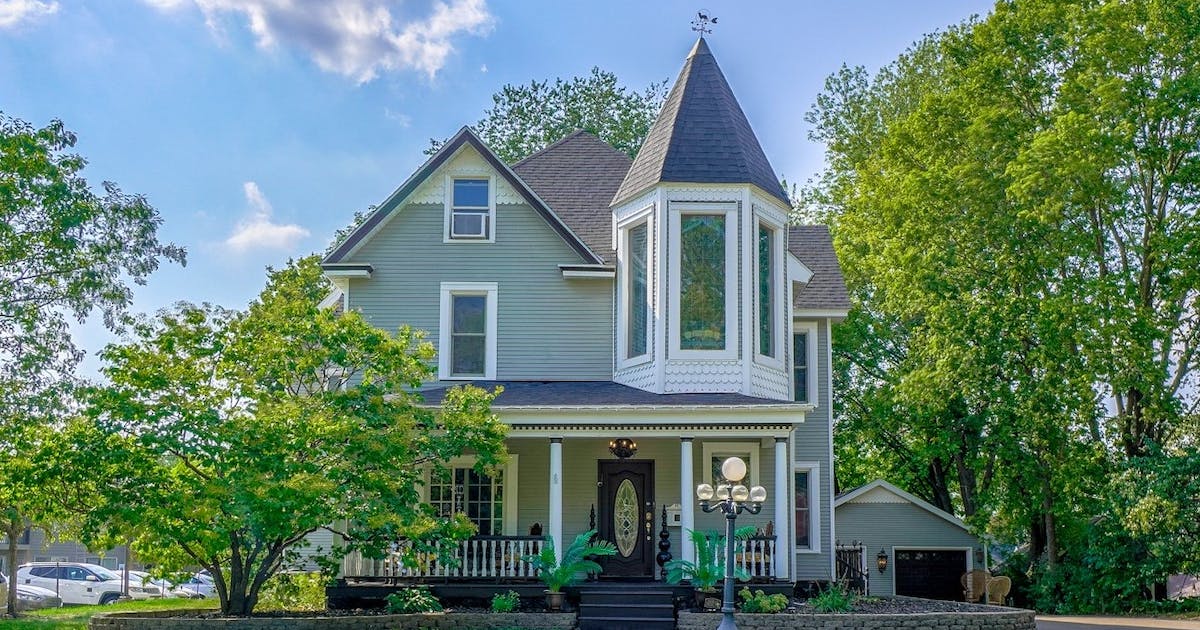 Brooke Fleetwood had already assumed the pink castle, a much talked about home in downtown Hudson. So when she looked for her next home to remodel, she knew she had to have a strong theme.

“The pink house had sparkle and glitz and glamour,” said Fleetwood, who works in the beauty business and does real estate next door. “I wanted something completely different – ​​something sultry, sexy – for the next house, so my next goal was to do a Gothic house.”

When Fleetwood stumbled upon a 1900 Queen Anne Victorian tower house a block off Main Street in downtown Hudson, it seemed like the perfect fit.

“There are hardwood floors. There are stained glass windows,” she said. “It has seven bedrooms. There are [several] stairs. It’s a super fun gigantic old house.”

Fleetwood made an offer on the home at 1031 2nd St. on Oct. 31, 2019. After signing on the dotted line a month later, she began remodeling it into what became the Goth Castle.

The house had already been converted to an Airbnb when Fleetwood bought it, and she continued to run it that way. After all, she had the experience. Since 2018, when the Super Bowl came to the Twin Cities, she’s been running the Pink Castle as an Airbnb.

When it came to transforming her new purchase, Fleetwood had ornate and custom pieces made, including dining room furniture with king and queen chairs.

“We designed all the furniture, the mirrors, the beds, the bedside tables just for the house,” she said. “Each room has a theme. So we have a black room, a red room, a more glamorous but sexy dark room. Each room is a different experience.”

Now that Fleetwood has completed the transformation, she’s considering what’s next.

“I will be working on other projects,” said Fleetwood, who recently set out to transform a mansion on a 22-acre hobby farm in Afton into an Airbnb “Glam Farm,” “bringing those old homes back to life and make it a destination.”

She listed the seven-bedroom, four-bathroom Gothic castle at $1.1 million.

Listing agent Jenni Martin said the next buyer will have several options for using the space.

“It could easily be turned into a single family home if someone wanted to. is not included in the price”. list price, but it’s possible for a buyer to buy outside of the sale for $100,000 if they want a turnkey Airbnb.”

Fleetwood said the house could also be easily converted into rental accommodation.

“You can definitely split the house in two. It could be a duplex because there’s a kitchen on one side and a kitchen on the other,” she said. “The possibilities are limitless.”

If anyone wanted to continue operating it as an Airbnb, Fleetwood said, the house pays for itself.

And it’s especially popular in October. “The biggest hit right now is renting it out for photo shoots and Halloween parties,” she said.

This October 31, the gothic castle will be a destination for cheaters as Halloween is the perfect holiday to welcome the community to a property that has earned a reputation for its macabre vibe.

“I don’t have that feeling, but some people say it’s scary,” Fleetwood said.