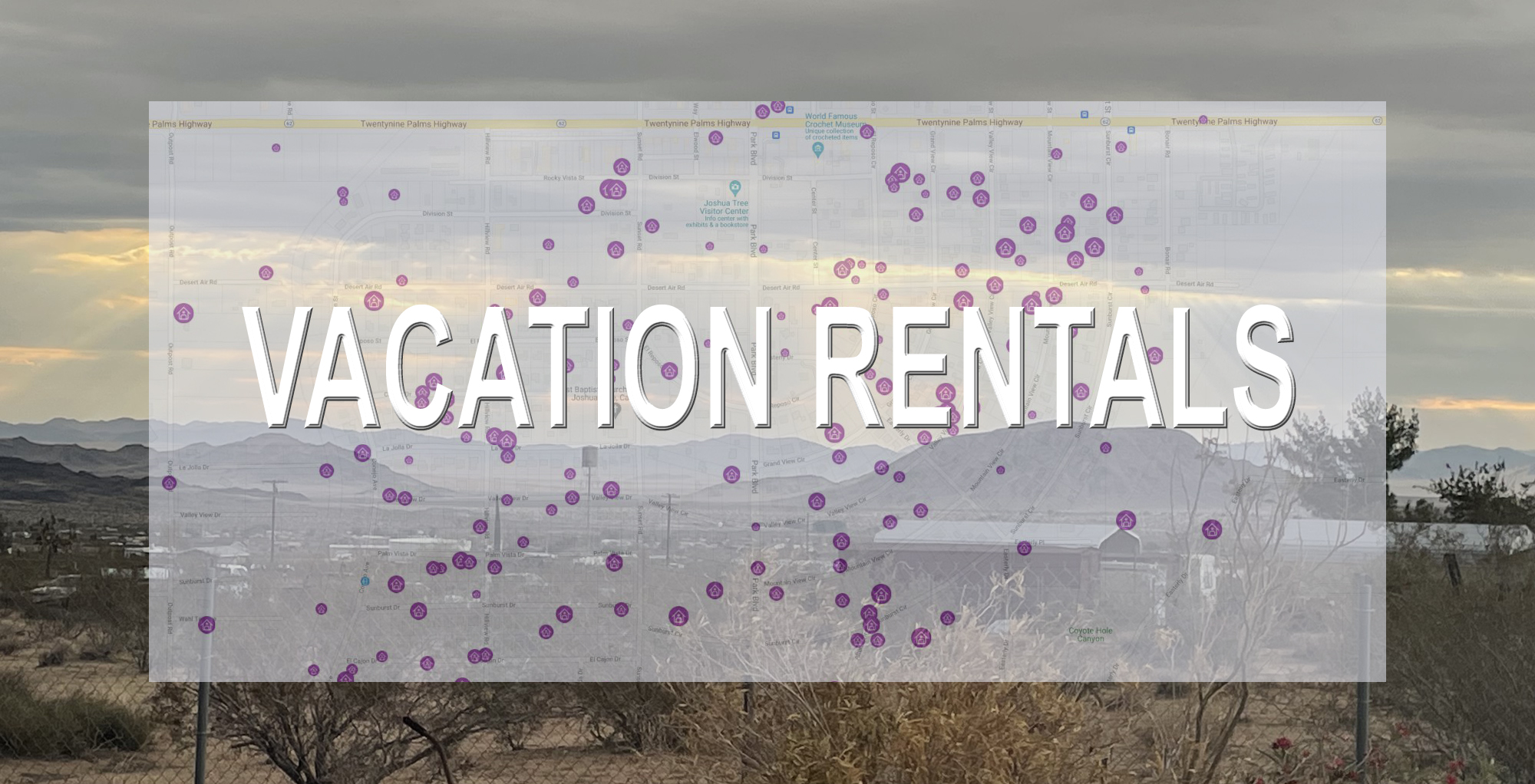 Michel Cicero has barely taken a day off since July 7, 2020. That day she was paddleboarding in Big Bear Lake with friends but had to leave early because her phone was ringing off the hook, she said. . “It hasn’t stopped since.”

Cicero is a real estate agent in Landers, Calif. Who borders the community of Joshua Tree, adjacent to the national park. She has seen firsthand the disruption the pandemic has created in the real estate market. The length of its sales season has doubled. In an area where single-family home sales were the norm, several buyers began to bid, often in cash, on each sale, raising prices and severely draining the housing stock.

“Traditionally, in the spring we have about 80 homes for sale in Joshua Tree. Earlier this spring we only had 19, ”she said.

The unincorporated community of Joshua Tree, population 7,000, is located in the Morongo Basin, a segment of the Mojave Desert that is home to parts of Joshua Tree National Park and the Marine Corps’ largest national base, Twentynine Palms .

The national housing market is very competitive due to high construction costs and low interest rates, but the Joshua Tree area is particularly hard hit due to its proximity to Los Angeles and limited housing stock. Residents say rising housing costs are making Joshua Tree unaffordable, while AirBnB customers are making it unliveable.

Before the pandemic, Joshua Tree in California was a desert haven for city dwellers trying to escape Los Angeles rent. “It was considered an affordable place to live,” explains Cicero. “Before, you could rent a two-bedroom house for $ 800 a month. “

Now Realtor.com only advertises three properties for rent in the community, each of which costs between $ 1,800 and $ 4,000 per month.

Unincorporated areas like Joshua Tree and Landers lack city regulators, relying instead on the county government for zoning measures.

Longtime Joshua Tree resident Breana Violanti said finding a long-term rental in town has become nearly impossible. “You can save money, you can prepare all kinds of things like a normal person would when moving,” she said. “There is not a rental. There is nothing.”

Katrina Hercules, a resident of the Landers, said last year’s scorching housing market has been characterized by two types of purchases: people buying properties to turn them into short-term rentals or people with extraordinarily high income settling in the community.

The economic incentives to own a home in Joshua Tree are clear: AirDNA reports that average daily rates for short-term rentals in Joshua Tree increased 69% (or about $ 140) from April 2019 to April 2021. AirDNA considers also the Joshua Tree area as a “supply limited market,” meaning they expect prices to continue to rise until 2021.

And if a buyer owns a property elsewhere in California, it’s likely that even with soaring home prices in the Morongo Basin, the median home price in Joshua Tree itself is up 264.3% from year over year and $ 200,000 compared to May 2019 a home in Los Angeles or San Francisco will translate into more purchasing power in the wilderness.

A growing economy based on tourism can pose many foreseeable problems for a rural community, although these are problems that many small towns and remote areas would like to face, said Lance George, director of research and development. information to the Housing Assistance Council, a national rural housing management body. non-profit.

“One of the main themes is that rural communities have a shortage of good quality rental housing to start with,” said George. In rural areas, the rental housing that exists is probably less dense, consisting of single-family homes rather than multi-family complexes.

“And when you cut into that market at any time, you’re probably going to hamper the choices of low-income residents. Economics is about choice: someone has a choice to pay more and others may not have those choices. “

Even before the pandemic, the United States faced a housing affordability crisis, where renters were most vulnerable, George said. Combine a tight rental market with high lumber prices, which means only high-end construction pays off, “and no one is going to build anything, especially in the rental market,” he said. “You add all of these dynamics together and you could have a really accelerated housing crisis among low and moderate income households who don’t have the money to buy homes. “

Although the tourism sector can have adverse effects, George finds potential solutions in federal investments in housing, rather than limiting tourism growth. “It really hurts the low income rental stock and low income households,” he said. “But the biggest problem in rural America over the past two to three to five decades has been people hemorrhaging.”

Hercules, who is outspoken on housing affordability issues in the Morongo Basin, agrees. Regarding the long-term sustainability of the community, she said, “I’m sure it’s not a question of ‘Is it possible? “As much as” Is it a priority? “”

Regarding short-term rentals, the problem is not their existence, “it’s the mix”, specifies Hercules. “Proportionally, they are just too many compared to [long-term] housing.”

“It’s like someone throws a big birthday party every weekend,” said Kim Stringfellow, artist and Joshua Tree resident. In his neighborhood of eight houses, Stringfellow believes there are three short-term rentals.

The volume of complaints about short-term rentals is so large that the county has created a 24/7 vacation rental complaint line. The line saw a 5,300% increase in calls from 2019 to 2020, according to the Desert Sun newspaper. The county is doing a good job of responding, Stringfellow said, but it’s still too little too late. Because there are no sound pads in the desert landscape, “I can hear people whispering 600 feet away from me,” she said.

Not to mention the recent rowdy group of tourists, four or five overcrowded people, who unloaded their ATVs and spent the weekend illegally riding around the neighborhood. According to Stringfellow, the activity continued even after the group was reprimanded by the sheriff.

The county supervisory board recently increased its capacity to oversee short-term rentals and increased fines for violating its vacation rental rules, according to the Desert Sun.

Several residents mentioned that the resumption of tourism has its benefits: “Do I like being able to have a good cup of coffee in Joshua Tree now? Or eat something? Yeah, that’s great, ”Cicero said. But at the same time, the area loses its appeal as people leave towns and put up huge fences and outdoor lighting, she said.

Several residents suspected that tourists had replaced petty criminals and drug addicts in the city. Cicero said some of these changes are positive. “But at the same time, there are lights all night long and I hear music and it’s kind of part of the new landscape.”

Others were less enthusiastic about such a demographic churn. Chris Clarke, who works for the National Parks Conservation Association, moved to Twentynine Palms when Joshua Tree became unaffordable for him.

“The community is being displaced by people of an upper economic class,” Clarke said. “It accentuates the class differences. There are people who could have afforded rental in a mobile home park 10 years ago, and this mobile home park now has airflows that rent $ 100 a night, or it was sold and Someone’s fancy Airbnb has entered, or whatever the reason, that option isn’t available to people, and they find themselves in even more difficult circumstances.

Hercules said authorities were not responding quickly enough to the housing crisis. “There is no sense of urgency, and that’s where we’re going to be knocked down,” she said. For her, the problems go back to a lack of local governance. She has big questions for the county: “Where are [short-term-rental] taxpayer money goes? And how do they directly help our local community? Do they just fit in a San Bernardino bucket?

The office of San Bernardino County Third District Supervisor Dawn Rowe did not respond to requests for comment from the Daily Yonder.

“There is just a huge gap between the locals and what is happening to our community,” Hercules said. “Does this happen to us?” Where do we have an agency? “