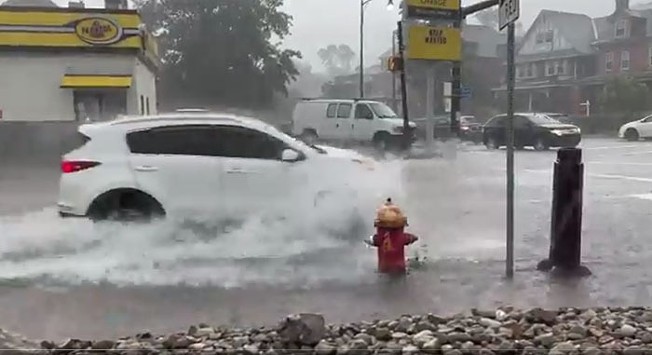 On June 13, Pittsburgh and the surrounding area were hit by very intense storms bringing a deluge of rain, high winds and even hailstones. The property damage was widespread and tens of thousands of Pittsburghians lost power, and many still have not recovered power. Parts of the area received about 2 inches of rain in a very short period of time.

Naturally, along with the well-known hills and valleys in the area, this resulted in flash floods in several different places, landslides, fallen trees and a lot of debris washed away. The storm also appeared suddenly, so several drivers encountered roads filled with water.

Here are some of the most striking images of the storm:

What appears to be a fuel tank was washed away in the Ohio River near the West End Bridge, as beloved Pittsburgh photographer Dave DiCello captured. Another Twitter user appears to have captured video of the same fuel tank floating on Sawmill Run through the Seldom Seen Greenway in Beechview.

A red Jeep found itself in deep water on a ramp leading to I-376 in Squirrel Hill. The water eventually spun the vehicle onto its side and pushed it against the retaining wall.

A car right in front of me almost took off at the underpass connecting #Pittsburghfrom the Squirrel Hill exit to the I-376 slip road.

As I walked home and warned the other drivers to turn around in the event of a flood, some asked, “Well, how flooded is it? … Like, totally flooded? #TurnAroundDontDrown https://t.co/geiXKwiRRK pic.twitter.com/uRCCngjRzJ

Another vehicle got stuck in Bates Street on the ramp to I-376 in Oakland. According to a Twitter user, the driver and her dog were stuck in the flood waters for some time, but she and the dog managed to get to safety.

The intersection of Reynolds and Murtland Streets at Point Breeze was inundated with water for some time, creating a pond-like atmosphere in the East End neighborhood.

Point Breeze was particularly hard hit by the storm, as photos by Pam Harbin, a Pittsburgh Public School board member, show several trees blown down by the storm, including one that appears to have struck a parked vehicle . 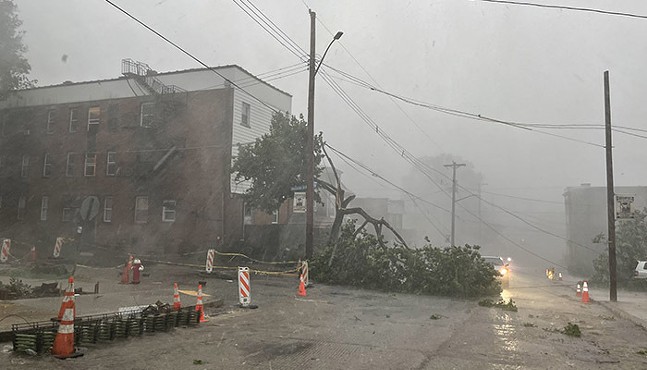 Fallen tree and power line at the intersection of Montclair Street and Greenfield Avenue in Greenfield on June 13.