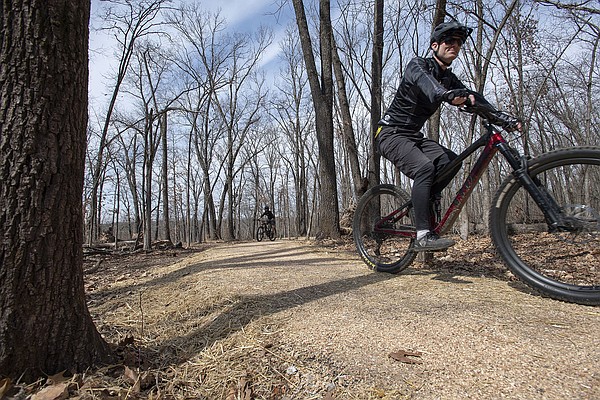 Northwest Arkansas is on the map as a spring break destination for mountain bikers.

The Cail family from Colorado Springs, Colorado, spent the past week hiking trails in Bentonville when the weather permitted. They chose northwest Arkansas over Moab, Utah, Matthew Cail said.

Local outfitters and businesses that cater to cyclists say their activity is on the rise. Some credited the good weather from March 14 to 18. Some credit relief from covid-19 isolation.

Ben Falkner, store manager of Trailside Coffee Co. on the Razorback Greenway in downtown Springdale, said his store has been much busier over the past two weeks of spring break.

“But with our customers, it was good weather,” he said. “And bikers love coffee.”

The Coler Mountain Bike Preserve campground in Bentonville saw an increase in bookings in March this year compared to March 2021, said Lucie Patton, senior director of marketing for the Peel Compton Foundation, which owns the reserve.

Josh Stacey, director of recreation services for the Bentonville Department of Parks and Recreation, said his staff have received more calls about the trails in the past two weeks.

He said callers ask for trail information and maps. Others say they’re in town on the trails and want to go swimming, for example.

“When bikers come from other areas in town, they stay in hotels, go out to eat and visit other fine establishments in northwest Arkansas,” said Matt Mihalevich, trail coordinator for the city of Fayetteville. “Passengers stay in the area longer than those who are just crossing and stopping to refuel.”

A 2017 study by the Walton Family Foundation and PeopleForBikes found that 90,000 mountain bike tourists that year provided $137 million in economic benefits to northwest Arkansas.

Dane Eifling, mobility coordinator for Fayetteville, said the city uses technology to count the number of people at specific points along its 136-mile trail network. The busiest locations average over a year about 800 trips a day, he said.

“But on good weather days, when University of Arkansas students are in town, the trails see over 1,000 a day,” he said.

Alex Martens, owner of Ozark Bike Guides, said his bookings were up this year compared to last year. And more of them have been pre-booked, as opposed to those who scheduled at the last minute last year.

“I think people are more comfortable traveling this year with covid vaccinations,” he said.

Martens also reported seeing significantly more people using the trails while he was riding his bike. Its activity resumes in mid-March as spring break visitors travel on Saturdays and Sundays and head out the following weekend, Martens said.

Most of his business comes from people within a day’s drive of Northwest Arkansas – Dallas; Austin, TX; Kansas City, Missouri; small stone; Tulsa, Okla.; and other areas of Oklahoma. He called them “the long weekend warriors”.

But Martens also works with riders further afield in Colorado and Minnesota.

“It’s cold and snowy where they are, and they can be here in warmer weather in a day’s drive,” he said.

Martens has also worked with cyclists from Michigan, Pennsylvania, New Jersey and Maryland.

Many people camping on the Coler reservation came from other parts of Arkansas, but the campground also welcomed visitors from Minnesota, Missouri and Texas, Patton said.

Martens agreed the area is becoming a popular tourist destination – and not just for cycling. He credited the camping, hiking, and boating opportunities that make northwest Arkansas a versatile destination.

April and Matthew Cail of Colorado Springs, Colorado, brought their family to spend spring break on the mountain bike trails of northwest Arkansas.

Living in Colorado, the family of five often hits the ski slopes of Durango, Crested Butte and Snowmass.

The family had booked a spring break mountain bike trip to Moab but canceled for northwest Arkansas, their favorite, Matthew Cail said. He said he read about the Northwest Arkansas trails about seven years ago in a magazine.

Northwest Arkansas is cheaper, he noted, and the drive here takes only four hours longer than to drive to Utah. The family loads into a van, with a cargo box on top and five bikes strapped to the bumpers.

The family likes the design of the Northwest Arkansas trails and prefers their shorter length, Cail said. Family members can ride different trails and meet at the bottom.

“Mom and dad can go one way, and the kids can go another,” he said.

These kids — Ben, 16, and Piper and Lindy, 14-year-old twins — all ride for their schools’ mountain bike teams, Matthew Cail said. But the family stays together on longer runs at ski resorts, he said.

The family was here last year and hiked the Slaughter Pen Trail and the Coler Preserve, both in Bentonville, with Martens as their guide.

They tackled both again this year and hoped to tackle more, but the weather didn’t cooperate.

Matt Cail said the family went to the movies on Wednesday and planned to hike the paved trail at Huntley Gravity Park in Bella Vista on Thursday.

But they are not disappointed, he says.

“We love the restaurants here,” said Matthew Cail. “There are some awesome museums here. And we’re staying at an Airbnb near the trailhead which we love. We’ll probably try to stay there next time we come.”

Commentary: A blatant double standard – one for Ukrainian refugees, one for Central Americans