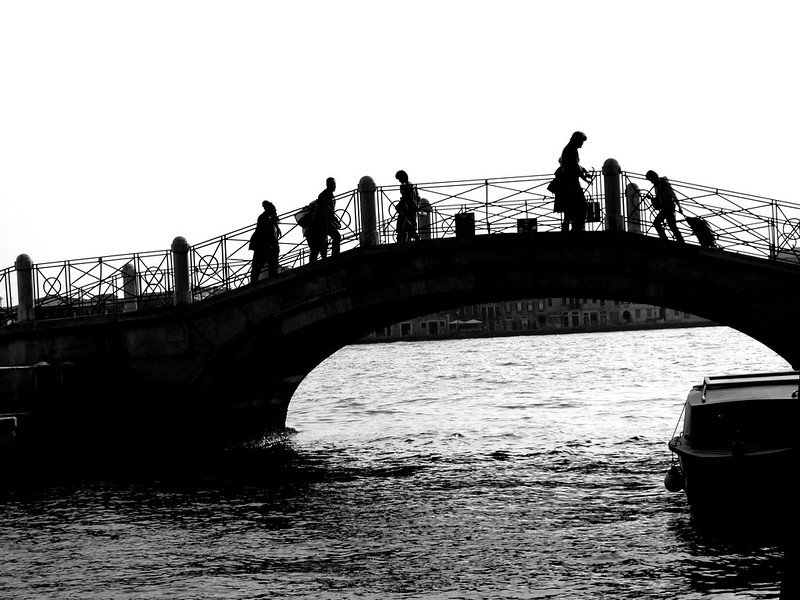 Surtourism in Venice: a local perspective

Managing daily life in Venice is a challenge for the locals. Provided by Maria Alice Ferigo

I got a first glimpse of what life in Venice was really like just a few weeks after moving there. At the time, I was a 19 year old college student and didn’t even know overtourism was a thing. It hit me when I needed to take pain reliever for my headache. Although I still couldn’t orient myself well in the city, I lived on one of the main streets, so finding a pharmacy wouldn’t have been difficult. Or so I thought.

Instead, I had to walk around a lot before I found the only pharmacy in the whole neighborhood. At the same time, within a radius of about 100 meters from my home, I was able to spot: 4 souvenir shops selling overpriced carnival masks, 3 tourist trap restaurants, a few people selling selfie sticks and umbrellas, a tourist information center, and a huge mass of people taking pictures of the water and feeding the pigeons.

I lived on a large, central, crowded street, and finding a pharmacy was a problem. I later realized that this episode was just the tip of the iceberg. When you live and study in Venice, any mundane activity in your daily life is a problem.

The question of accommodation in Venice

Accommodation is one of the main problems in Venice. Mainly thanks to Airbnb, most people choose to rent to tourists rather than workers or students to earn more money. The result? A huge gap between demand and supply for locals in need of an apartment in Venice. The main consequence is that homeowners can get away with renting out tiny, unsanitary apartments and having them filled up anyway.

For example, an apartment for 4 students is usually a two-bedroom apartment of 50 to 60 square meters. Finding a room for yourself is rare and expensive, so in most cases you will have to share a “doppia stanza” with a complete stranger. In some cases, this goes as far as a “tripla stanza”, with three people sharing the same room. Most of the living rooms are converted into bedrooms to accommodate more people. Sometimes they have curtains instead of doors and walls, as it was originally an open space. A friend of mine lived in an apartment with plywood doors only.

In 2019 people would pay 300-350€ /month for a bed in a shared room, excluding charges. For owners, that’s up to 1200-1400€ /month per apartment. It’s incredibly profitable because they don’t spend on renovations and they usually own multiple apartments. For comparison, the average salary in the city in 2019 was around 1,500€ per months for an employee.

Overtourism and Airbnb here are striking: not only do they reduce the supply of housing for average people, but they create a huge economic and social divide. Those who have inherited one or more apartments can live comfortably, and those who need to rent have to put up with dilapidated and overpriced places.

Trying to deal with overtourism

Crowds in Venice occupy most of the streets. Image by Wonderlass (Flickr.com)

Looking for a solution, many people have started to rent houses in “terraferma”. These are the mainland towns of Mestre and Marghera facing the island of Venice. In this way, they could find apartments at least compliant with legal standards and more affordable. The 4 km long bridge called “Ponte della Libertà” connects the mainland with Venice Santa Lucia station. From there you will have to walk or take a boat.

After a year on the island, I chose to move to the mainland also in 2016. The position was not bad and getting to class took me between 30 and 45 minutes. So, problem solved? No, just replaced by another: the crowds

In 2019, the island of Venice had about 55,000 inhabitants, 280,000 if we also consider Mestre and Marghera. The number of people visiting the city that year was more than 5 million. Obviously, island infrastructures are not designed to handle such numbers. In high season, tourists fill public transport to a point where locals cannot enter and get to work.

During carnival weeks, students and teachers often arrived in class 30 or 40 minutes later. The reason is that they missed 1 or 2 buses or boats because they were too full. Plus, they took longer detours to avoid crowded streets. In the case of “acqua alta”, or high tide, it is even worse. The city of Venice installs walkways on the main submerged streets, but not all of them, and the walkways are narrow. Then crowds of tourists take up all the space and block traffic, especially as they stop to take pictures or look around.

It goes so far as to see people hanging out in university libraries or interrupting classes and exams. It is a symptom of an important aspect of overtourism: attitude. People who visit Venice often assume that every public place or building is there for them, and forget that a city is a living organism whose places are there for the benefit of the people who permanently occupy it.

How do the people of Venice feel?

As a result, the people of Venice do not like tourists. Locals do not want to mingle with tourists at all and are extremely jealous of their hangouts. The reason is that they fear they will become too overcrowded and too expensive, and they will end up being further and further removed from their own neighborhood. Many bars, restaurants, and cafes prefer to stay unfamiliar, and some even refuse to serve you if you don’t speak the local dialect.

On the other hand, people who work in the tourism industry profit as much as they can from tourists. With most of the visitors being on the rich side, this is extremely profitable. Price inflation and scams are very common in Venice, with some people claiming it is “fair” because tourists “have ruined the city”.

Obviously, what is clear is that overtourism has created a huge conflict between tourists and locals, making it impossible for the two to have a healthy relationship that benefits both. On the one hand, tourists can only see Venice superficially and never really know it. On the other hand, the Venetians’ resentment towards all visitors means that they tend to have a very conservative and narrow-minded attitude that does not benefit anyone.

Unfortunately, the government is not a big help. The big travel companies that draw millions of tourists are powerful lobbies and no decision is made to create a more liveable city for everyone. City councilor Zuin even went so far as to suggest that Venice become an open-air museum for tourists. I find such statements show how overtourism shapes the minds of people to the point where they forget that a city was made by its people to suit them, their way of life and their culture. A city exists because its inhabitants made it in the past and live it in the present.

Empty streets in Venice: an unknown reality before the Covid19 crisis. Image by Maria Alice Ferigo.

In March 2020, the whole world closed its doors to respond to the Coronavirus crisis. The impact of travel restrictions on Venice was impressive and unlike any other city in the world. On social media, we’ve all seen images of the empty city that are both supernatural and disturbing. Eventually, over the weeks, people started talking about the elephant in the room: overtourism.

One thing that was clear to everyone was that after this crisis, things wouldn’t have been the same. The travel bans showed that in Venice, once we cut tourism, there wasn’t much left. At the same time, it meant returning the city to its people and suddenly solving most of the problems of life in Venice. The inhabitants had regained their spaces and their freedom, and they could use the places of the city as they were intended.

Right now, the plan is to encourage businesses to look to residents as much as possible and to offer services that can be useful to residents as well, instead of becoming tourist hubs. Also, a discussion on the housing problem was opened and the government begins to think about a strategy to grant a more equitable distribution of apartment buildings to the inhabitants.

I hope that the case of Venice will be an example around the world. Governments need to remember that they need to make sure that their cities are as valuable to their citizens as they are to their visitors. And as travelers, it’s important that we become more responsible in our behavior and choices as tourists.