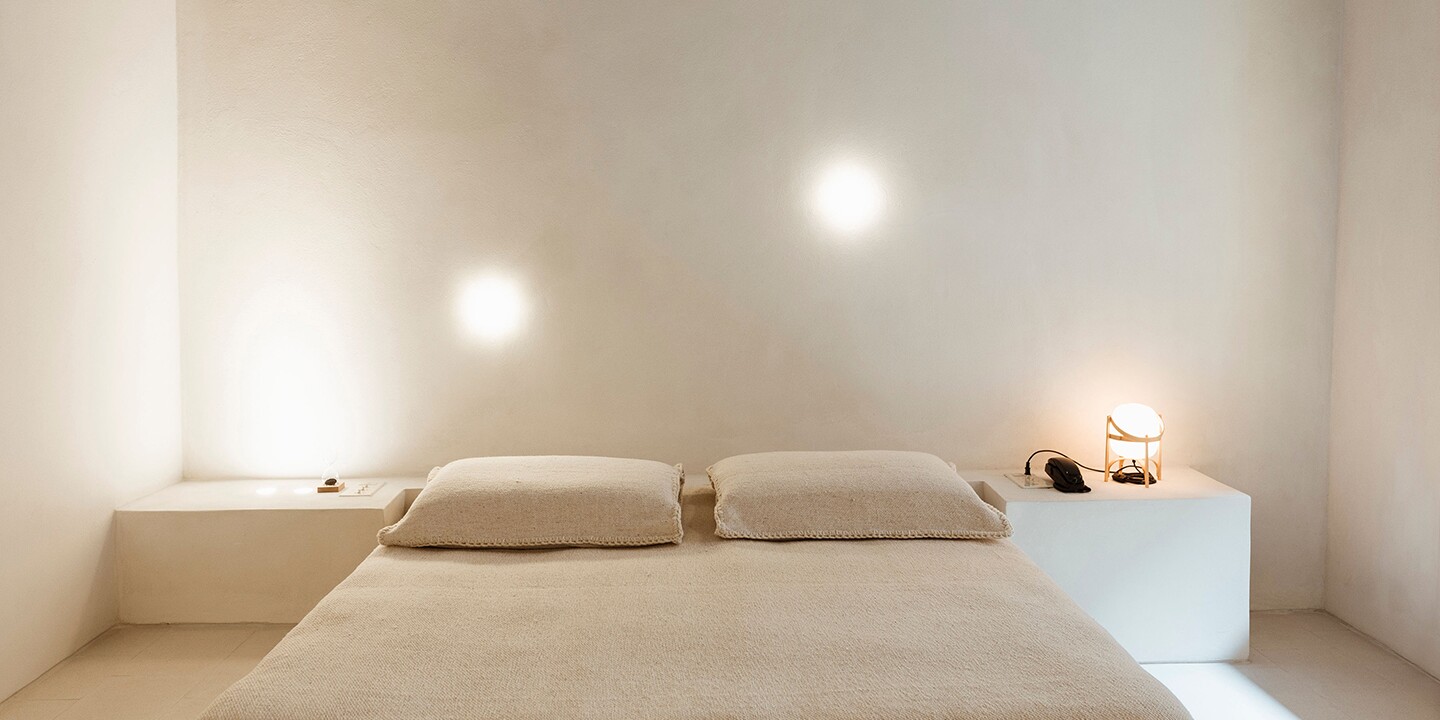 Amid the Mexican capital’s flashy, glamorous hotels, a growing number of retreats — many independent and owner-run — reveal a more intimate side to the city. They are located not only in popular neighborhoods like La Roma and Condesa, but also throughout the city, from the historic city center to chic Polanco. These are the best hotels in Mexico City for a truly local stay.

Las Alcobas has long been a hub for high-end travelers with a keen eye for design. Set in a former private residence in Polanco with just 35 rooms, the beautiful, intimate hotel was recently renovated by Yabu Pushelberg, the team behind the original design. Earth-toned interiors have luxe accents like fine Italian linens and spa-like marble bathrooms with soaking tubs and rainfall showers. One of the most striking elements of the hotel is the rosewood spiral staircase at the entrance. While the homey interiors and service alone are worth a visit to Las Alcobas, the ideal location is equally appealing: it’s wedged between sprawling Chapultepec Park and Presidente Masaryk Avenue, Mexico City’s answer to Fifth Avenue, lined with shops and cultural institutions. like the Museo Soumaya and the Colección Jumex.

Over the past two decades, Mexican hotelier Grupo Habita has opened a string of properties across the country while gaining a cult following. But one of its most valued properties is still Condesa DF, which opened in 2005. Set in a 1928 neoclassical French mansion on the edge of Parque España in the tree-lined town of Condesa, the hotel is a favorite among residents, who are drawn to the rooftop terrace where cocktails flow and music plays long into the night. Travelers who want to tap into Mexico City’s party crowd can stop in for a drink or book one of the 40 chic white and wood-paneled rooms; some have terraces facing a canopy of jacaranda trees. In the morning, breakfast is served on the outdoor patio filled with palm trees and ivy.

The bright red bistro chairs and tables outside the To the EastThe black-framed windows facing the street are reminiscent of a British storefront, while the red front door resembles one one would expect to find in London. Designed by Mexican interior designer Sophia Aspe with nods to Britannia, the 19 cozy rooms also have quintessentially Mexican touches, with works by local artists like Arantxa Solis and furniture sourced from across the country, including hand-printed Michoacan side tables. One of the hotel’s biggest draw cards is Bar 45. Its menu, featuring experimental cocktails like the Julio Verne made with tequila, sake and grapefruit syrup, was designed by the famed barista. Limantour cocktails from Mexico.

It is rare to sleep in a house designed by a legendary architect. That’s why architecture enthusiasts flock to Casa Pani, a space designed by the late Mexican modernist Mario Pani, known for his innovative urban design. The team behind the project includes architect Miggi Hood, Yola Mezcal co-founder Yola Jimenez and entrepreneur Marie Cazalaa, who together bought two Pani-designed homes and renovated them, creating a cool guesthouse in the less touristy neighborhood of Juarez. Hood breathed new life into the modernist space while respecting its heritage. Six bedrooms all have huge windows and ensuite bathrooms. Each room has its own distinctive character, whether it’s a private terrace shaded by a jacaranda tree, a bathroom with a giant bathtub or a vintage orange wingback lounge chair. There’s also a courtyard, communal kitchen, and lounge where guests often meet and mingle.

Most foreigners flock to neighborhoods like Roma or Condesa, but a stay in the historic part of downtown is just as rewarding. Once on the doorstep of Mexican Circle, you’ll find there’s plenty to explore in the surrounding area, including the majestic National Palace. Located in a restored 19th-century building, the ground-floor courtyard is home to two restaurants by famed Mexican chef Gabriela Camara and a collection of artisan shops selling ceramics and textiles. Upstairs, the 25 rooms are minimalist and spacious with neutral Oaxacan textiles and wooden furniture from local design studio La Metropolitana. On the rooftop, you can sip cocktails while soaking up the history and admiring the Metropolitan Cathedral, National Palace, and Templo Mayor.

When Polanco entrepreneur, property developer and resident Octavio Aguilar bought an old mansion ten years ago, his first intention was to rent it to an embassy. But he changed his mind when he found papers that allowed him to use it as a hotel. With the help of architect Claudio Gantuz, the original mansion was renovated in Casa Polanco. A new wing has been added and the entire property has been transformed into a hotel that resembles a private home. There are 19 individually designed rooms with high ceilings, some with terraces, others with oversized soaking tubs. There is a large common area where guests can relax: Sip a glass of wine on the front terrace, read in the library or have a daily afternoon tea in the light-filled inner courtyard. There’s also a rooftop spa cabin, where treatments like massages can be booked.

Mexico City has no shortage of reimagined mansions, but Ignacia Guest House is particularly stunning, thanks to the design-focused finishes of the 1913 Beaux Arts building. At the center of the hotel is a courtyard, where you can relax in a cactus garden. To one side of the courtyard is the restored house with a black-themed room, pink living room, library, and kitchen and dining area with patio doors that open out to the courtyard. Opposite the main house, on the other hand, is a clean, shiny new building with four guest rooms painted in shades of yellow, pink, black, or green. Wherever you choose to stay, don’t skip Ignacia’s morning meal. With a selection of artisan conchas (Mexican sweet bread), fresh fruit, and homemade sopes and tamales, breakfast is worthy of a lazy morning.

From the founder of the local womenswear brand Octavie Casa comes an elegant seven-bedroom minimalist retreat in La Condesa. Even the exterior of the building, which has a wood latticework facade and leafy plants that add life and color to the natural corners, has a soothing feel. Inside, bright neutral bedrooms and large white beds promote a sense of tranquility; all ceramics, glass and linens are sourced from local brands like Onora, Encrudo, and Entei. Although the hotel is firmly rooted in Mexican design, from certain angles you could almost mistake it for a ryokan in Japan.

Despite its location on Paseo de la Reforma, the bustling main thoroughfare that runs through Mexico City, Four Seasons maintains an air of tranquility. Behind the tall walls that face the street, a peaceful courtyard is filled with citrus trees, banana trees, and a tinkling fountain, around which the hacienda-inspired hotel is centered. Overlooking this space are the 240 bedrooms, with white linens, printed headboards, and burgundy footstools. Facing the courtyard is also the downstairs bar and Zanaya Restaurant, which serves a seafood-inspired menu on an inviting terraced patio. On the rooftop, there’s a fitness center, spa, and pool where guests can retreat after a day exploring one of the continent’s liveliest cities.

When celebrity chef Enrique Olvera had to relocate his award-winning restaurant Pujol in Mexico City to a bigger space, his team transformed the original location into a mezcal bar, Ticuchi. He bought the two-bedroom apartment upstairs and turned it into Casa Teo, a place where it can host artist residencies so that creative minds from various fields can come together to exchange ideas. Centered around an open kitchen and a communal dining table for 10 people, Olvera often brings in chefs from out of town for special dinners bookable by the public and regularly hosts talks, events and workshops. Those who want a little more time to let their creativity run free — or just want a truly unique base in Mexico City — can book the Casa Teo apartment through Airbnb. Simple and airy, with plush white beds and neutral hues, it’s perfect for relaxing and clearing your mind.

>>Next: The 10 Best Hotels in Montreal