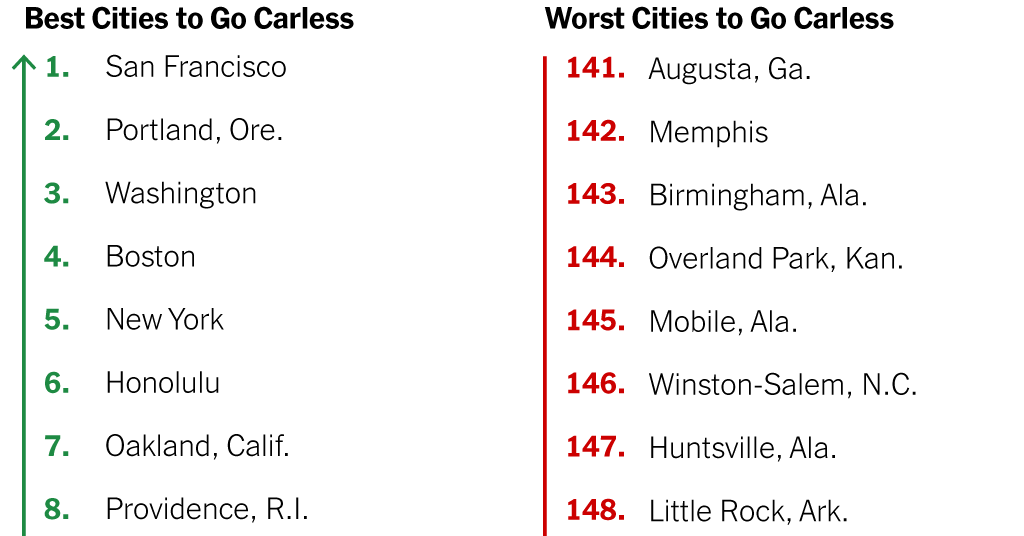 The best and worst cities to live without a car

In Florida, 600 tons of dead fish were piling up on the beaches. In the western United States, droughts have contributed to wildfires causing air quality warnings thousands of miles away. In a generally humid and temperate Britain, the very first heat warning was issued. In China, record rains have caused deadly floods. Each of these events took place over the span of a few days over the past week, and each was likely spurred on by climate change.

One way to make a personal difference is to ditch your fossil fuel car. Transportation is responsible for about 29% of greenhouse gas emissions in the United States, according to the Environmental Protection Agency, which reports that abandoning a single car would save about 4.6 tonnes of carbon dioxide in the environment every year.

Of course, going without a car is easier in some places than in others. A recent LawnStarter study compared the 150 largest US cities to find which ones were the best (and worst) for living without a car. The results were based on measures related to walking, cycling, commuting, safety (e.g. pedestrian deaths) and weather (some places are just too cold or too hot to sabotage it. .)

San Francisco, though ranked 81st out of 150 cities for safety, came out on top, largely due to its mild climate and high commuting scores (and despite its rough hills). In fact, West Coast cities took four of the top 10 spots, with their mild climates helping to move the needle.

Shreveport, Louisiana came last, with the lowest safety score in the pack. Like many cities in the south, it also suffered in the rankings due to a humid climate inhospitable to walking or cycling, and poor commuting systems. It wasn’t the hottest, however: five Arizona cities – Scottsdale, Glendale, Chandler, Phoenix and Gilbert – tied in that category, topping all other cities for their number of days over 90 degrees. (San Francisco, Oakland, San Jose and Fremont, Calif., With Seattle, tied for the fewest days above 90 degrees.)

Washington, DC, was renowned for having the best travel methods and times, helping it climb to third place. Portland, Ore., Took second place thanks to its access score, which rewarded cities for the highest shares of cyclists, walkers and carpooling participants.

This week’s chart, based on LawnStarter’s study, shows the top and bottom 10 cities for car-free living.