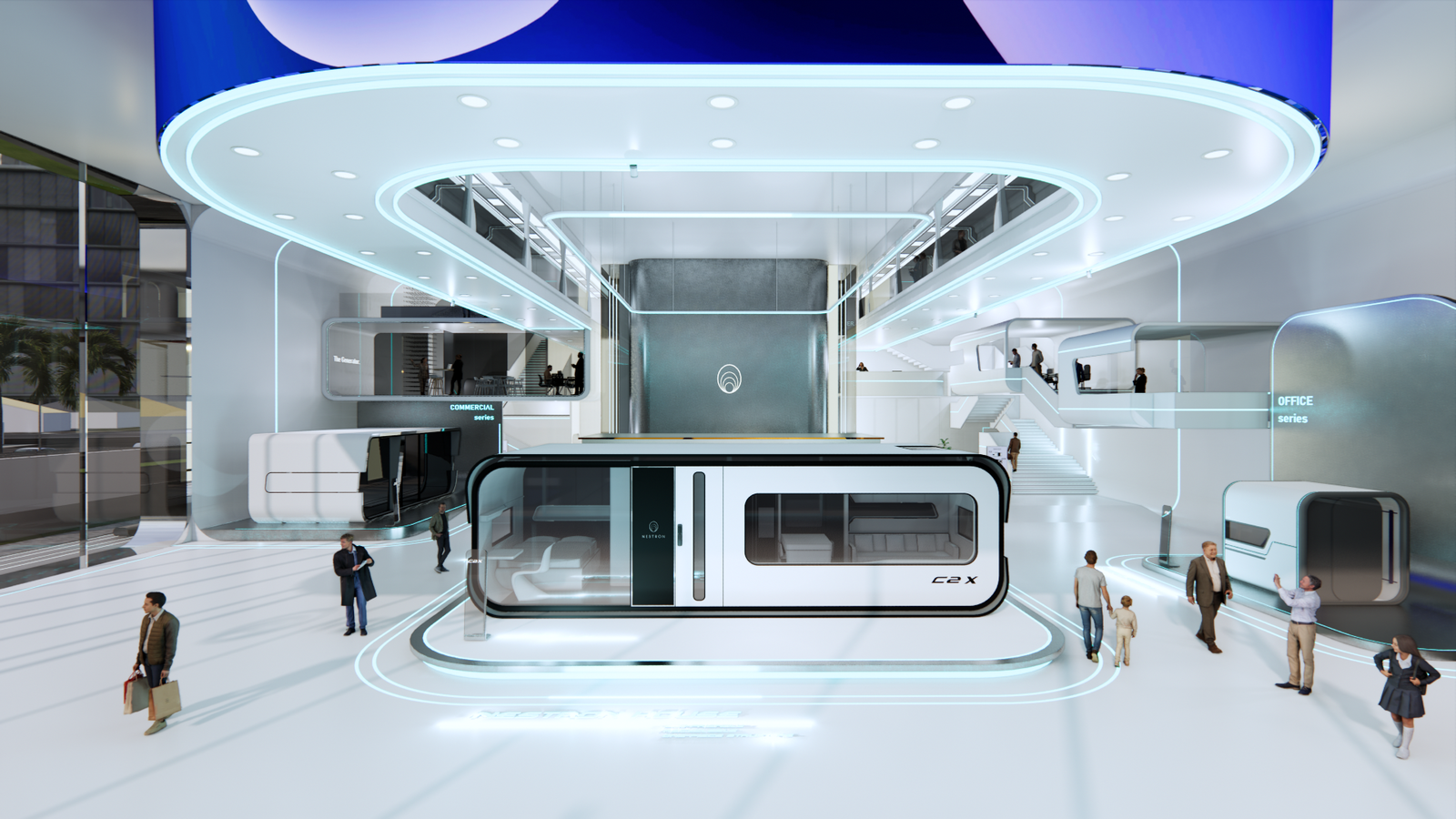 The big, big plans of a small homebuilder to bring its space-age prefabs to the masses

For years, tiny homes have been gaining ground in American cities like Durango, Colorado, Fresno, California and Flat Rock, North Carolina. Until recently, however, buyers looking for options for an alternative, eco-friendly lifestyle, extra income from rental property, or just affordable housing mostly had to do the legwork themselves. themselves. (The HGTV series is called Tiny house hunters For a reason).

Soon that might change. Nestron, the Singapore-based company behind futuristic prefab homes like the 279-square-foot galvanized steel-clad Cube Two (from $77,000) and wood-wrapped Legend Two ($55,000) wants to make it easier for potential buyers. to see what they’re getting into, literally.

Although no one in the United States currently lives in one of its tiny homes, the company plans to open supermarket-sized showrooms in Las Vegas, Houston and Fort Lauderdale in June 2023, followed by others in Japan, Europe, Australia and New Zealand the following year. Nestron says it already has 15,000 pre-orders requiring $10,000 deposits from customers in those US cities.

“The needs and calls of tens of thousands of market customers are our driving force,” says Lawrence K., president of Nestron, who declined to share his full last name. “Our goal in opening Nestron Centers is to realistically showcase the tiny home lifestyle we offer and provide a more direct live experience and comprehensive after-sales service.”

To date, one of Nestron’s models has been installed in the UK for a private resident, and the company plans to deliver to Hawaii, Maryland and Tennessee by the end of 2022. Is it any idea crazy to open multiple showrooms in a foreign market without proof of concept and a successful track record of ownership? Maybe, but K. says pre-orders and inquiries tracked on the company’s AI-powered database show growing demand in the United States from a diverse set of buyers. and potential customers.

More than just retail showrooms for individual consumers, Nestron Centers are envisioned as hubs for decentralized networks of sustainable, low-carbon tiny homes to serve local markets by mitigating the affordable housing shortages. The United States alone is missing 1.5 million homes according to a report by financial research firm Moody’s Analytics. K. believes that by exposing consumers and city officials to Nestron homes and the quality of life they promise, the company can begin to close the gap, if only in small steps.

“The inspiration, I would say, for the Nestron Center is, of course, the public,” K. says. in general.”

It sounds like a big bet, but it’s a bet with a distinct vision. K. says showroom designs, like Nestron’s homes, are inspired by Elon Musk’s SpaceX, Foster + Partners-designed Apple Stores, and sci-fi movies such as tron and Avatar. Renderings show the centers clad in white metal facades and glass curtain walls, with solar panels to minimize reliance on local energy grids. Outside the 20,000 to 50,000 square foot buildings, landscaped areas will include Nestron homes designed as glamping fantasies, disaster relief homes, medical facilities and residential homes for sprawling small house communities.

Interiors are depicted with a curvilinear floor plan that includes large-scale modular homes, indoor furniture and LED-lit studios, meeting spaces and shopping areas. According to K., the centers will help explain what Nestron sees as the advantages of the prefab tiny house lifestyle: a lower carbon footprint, floor plans that facilitate efficient living; abundant natural light; and smart features such as lighting, sound and climate control systems.

For now, the company is keeping showroom details oddly vague. The Orbiter, as a press briefing put it, is “a space tunnel with a sci-fi vibe”; the builder is a destination for “like-minded people such as designers, builders and more to connect”; the NFT Gallery, a space to “discover the virtual world of Nestron”.

What’s clear is that potential buyers will be able to browse homes, use smart interfaces to customize models to suit their budget and preferences, and complete their purchases through an in-store app. According to the company, units can be shipped in around 90 days and installed on the day of arrival, and after-sales service for maintenance and furnishing upgrades will allow buyers easy access to service. customer. Think of it as a modern Sears kit house backed by the Geek Squad.

K. says that the houses are delivered complete and that “there is no installation required upon arrival”. But that’s not strictly true. Local contractors are needed to install the units, which are anchored to the ground by four support legs pierced with screw holes 60 to 100 centimeters in circumference depending on terrain and building requirements. Then there are the electrical and water hookups, and most importantly, allowing the building type according to an area’s building and zoning codes.

Last April, in northern Las Vegas, local leaders brought in bulldozers to demolish a community of small houses the non-profit organization New Leaf had built for homeless residents on a parcel of land zoned for single-family homes of at least 1,200 square feet. But a Nevada state law, Senate Bill 150, which passed in 2021, will require major cities to create building and zoning codes to allow small homes in certain areas by 2024. Nonetheless, the incident lays bare the bitter fault line that has emerged over small homes and where they are allowed to be built, which in many cases, due to coded size requirements, amounts to discrimination. structural action against the poor and disadvantaged.

K. offers assurances that Nestron has done his homework and says he is currently in talks with authorities in Houston, Las Vegas and Ft. Lauderdale who “accept our product very well.” Even if that’s true, Nestron’s ambitions for a small takeover of the domestic world, if you can call it that, are likely to be blocked by jurisdictions across the United States. States and cities that ban tiny homes rarely do so overtly, but instead have onerous inspection programs or requirements to square feet, ceiling heights and outlets that make it illegal to live there.

Still, building showrooms could serve as a way to raise awareness of the viability of tiny homes to ease the housing crisis, especially as housing prices continue to soar. Prefabricated and assembled in Asia, homes like the Cube Two, which retails for a base price of $77,000, can be built up to 50% faster than those built locally, according to Nestron media representative TzeYan Law. . Advanced automation and casting processes—Nestron has 27 proprietary molds—achieve greater precision than traditional construction methods, generating less waste and using fewer materials to control costs, Law says.

The centers Nestron plans to open are just one phase of its larger vision. The company also wants to open factories in the United States, the European Union and Japan to increase production and reduce shipping costs. To opponents who might find such an investment premature, K. argues that the need for affordable and readily available housing on the market is real, especially in the context of disaster relief, and that it is high time for manufacturers are mobilizing to meet demand.

“Last year the wildfires in California kind of destroyed a lot of things,” K. says. “If we had had a solution back then, I think it would have helped society tremendously.”

TripAdvisor (TRIP) will attract brands with the launch of Wanderlab