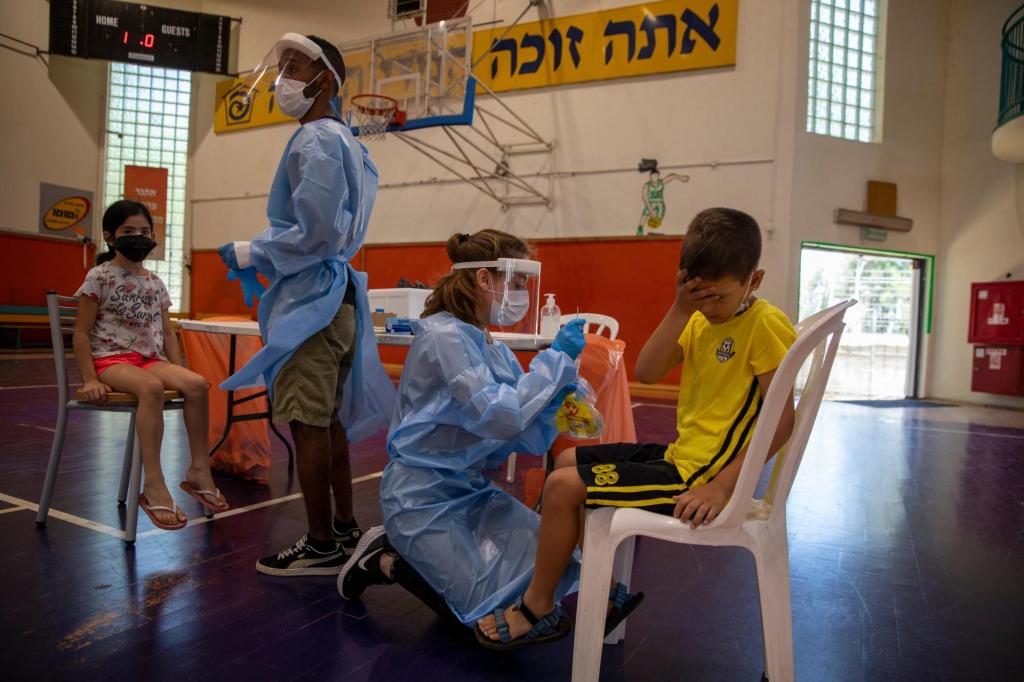 The latest news on the COVID-19 pandemic

By the associated press

The 1,100 new cases reported by the Korea Disease Control and Prevention Agency were the highest on record for a Monday, when the daily increase is typically smaller due to the reduction in testing over the weekend.

More than 780 of the cases were from the capital Seoul and neighboring provinces of Incheon and Gyeonggi, areas where authorities enforced the country’s toughest social distancing measures from Monday.

South Korea added more than 12,100 cases this month alone, bringing its number of cases to 169,146, including 2,044 deaths. The country last week saw record daily increases for three consecutive days until Saturday, when it reported 1,378 new cases.

The viral outbreak is a worrying development in a country where only 30.4% of a population of 51 million people received their first doses of vaccines.

MORE ON THE PANDEMIC:

– South Africa steps up vaccination campaign, too late for this wave

– Myanmar caught off guard as cases rise and oxygen declines

HERE’S WHAT ELSE IS:

DHAKA, Bangladesh – Bangladeshi authorities say the country has recorded the highest number of COVID-19 victims and positive cases in a single day.

The news comes amid fears the coronavirus pandemic will worsen over the next seven days.

The government’s Health Services Branch said 230 people have died and 11,874 tested positive on Sunday. It’s a one-day record on both counts.

Around 100,000 people have tested positive for the coronavirus in the past 10 days.

Bangladesh has been under a nationwide lockdown since July 1. But new records of positive cases are being reported every day.

Overall, Bangladesh has reported more than one million positive cases, including 16,419 deaths, in the country of 160 million people.

MOSCOW – The daily tally of confirmed coronavirus infections in Russia has passed 25,000 for the third day in a row.

Russia has faced a surge in contagions in recent weeks, with new daily infections rising from around 9,000 in early June to more than 25,000 on Friday. For the first time in the pandemic, the daily death toll surpassed 700 on Tuesday. It has remained at that level ever since, with 749 new deaths recorded on Sunday.

Officials attribute the surge to the spread of the delta variant. They seek to increase the vaccination rate, which has remained lower than that of many Western countries. As of Wednesday, about 27 million Russians, or just 18.5% of the 146 million population, had received at least one injection of the vaccine, and 18.5 million, or 12.6%, had been fully immunized.

Asad Umar also heads the national body responsible for controlling the coronavirus. He said people over 50 are vulnerable to serious health effects.

Umar said in a tweet on Sunday that 5.6 million people, or 20.6% of Pakistanis in this age group, had received at least one dose of the vaccine.

The federal body recorded a slight increase in the positivity rate. He asks residents to wear masks and maintain social distancing in public places.

Authorities are reporting 27 more deaths and 1,980 more cases of the virus in a single day. This brings the number of deaths from COVID-19 in the country to 22,582 and the total number of confirmed cases to 973,284.

CAIRO – Health officials say Libya has seen an unprecedented rise in coronavirus cases amid a slow vaccination program and concerns over the highly infectious delta variant.

The number of new cases in the oil-rich country has increased more than six times since July 1, according to daily figures from the Libyan National Center for Disease Control.

“We are facing an unprecedented situation,” said Tareq Gibrael, chief medical officer of the center. “The steadily increasing curve of new cases shows that we are preparing for a third wave, especially now that the delta variant is spreading to neighboring countries. We are in a very difficult position. “

The North African country recorded 2,854 new cases on Saturday, up from 719 a week earlier. So far, Libya has recorded more than 200,000 cases in total, including 3,232 deaths. The actual numbers would be much higher given the scarcity of testing and the exhaustion of the country’s healthcare system after nearly a decade of civil war.

LONDON – Britain’s Vaccine Minister has said the British should continue to wear masks indoors from July 19, even if the legal requirement to do so will be lifted.

Prime Minister Boris Johnson will confirm on Monday whether most restrictions on coronaviruses, including social distancing and mandatory mask wear, will be lifted the following week as widely expected.

Vaccine Minister Nadhim Zahawi said new guidelines would be released on mask wearing on Monday. He said there would be “an expectation that people wear masks indoors, in crowded places, on public transport” instead of a legal requirement.

The UK is seeing a sharp increase in coronavirus cases. This is partly due to the more transferable delta variant and partly due to increased social mix with the relaxation of lockdown rules. New cases now number more than 34,000 per day. But deaths and hospitalizations have remained low and broadly stable.

JERUSALEM – The Israeli prime minister said the country had reached an agreement with Pfizer to receive a new batch of coronavirus vaccine in August to help it with its adolescent vaccination campaign.

Prime Minister Naftali Bennett said at the start of the weekly Cabinet meeting that the agreement to bring forward the delivery of new vaccines to August 1 to “ensure from then on a continuous supply of vaccines in the State of Israel. “.

Bennett said the country had vaccinated more than 200,000 people in recent weeks. Many of them were teenagers. The country is trying to stop a new outbreak of the highly contagious delta variant. Children under 12 are not yet eligible for the vaccine.

Israel has vaccinated more than 61% of its 9.3 million citizens with at least one dose and nearly 56% with two doses, the vast majority with the Pfizer / BioNTech vaccine.

The Ministry of Health has seen a steady increase in new infections in recent weeks, most among unvaccinated young children. Most of the new infections have been mild cases of coronavirus.

Health Minister Budi Gunadi Sadikin said the Moderna vaccine would be used as a third dose for health workers.

Sadikin said that “the plan for this vaccine, besides (being) the first and second injections for the Indonesian people, we will use it specifically for the third booster injection for Indonesian health workers.”

Many healthcare workers have already been vaccinated with the Sinovac vaccine produced in China.

It’s part of a rapid increase across the continent. And experts say the push here has yet to peak.

South Africa has reimposed several restrictions to combat the new wave. They include closing restaurants and bars and limiting alcohol sales.

Its vaccination campaign also finds its marks after several stumbles. But experts say it’s too late to reduce the deadly impact of the current spike.

Instead, South Africa is rushing to immunize enough of its 60 million people to mitigate the impact of the next wave.

TOKYO – The mayors of two islands in Tokyo have called on the metropolitan government to remove the planned Olympic torch relay from public roads amid an increase in coronavirus cases.

The torch relay in Tokyo, which began on Friday, has been pulled from all public roads except those on the islands, due to the increase in cases in the Japanese capital.

The Kyodo News Agency reported that the mayors of Oshima and Hachijo have called on the Tokyo Metropolitan Government to remove the torch from public roads in their area, citing the increase in cases of the virus.

Prime Minister Yoshihide Suga declared a state of emergency in Tokyo on Thursday.

Tokyo reported 950 new cases on Saturday. This is the highest level since the beginning of May. Japan has reported around 816,000 cases and 15,000 deaths during the pandemic.

The country aims to vaccinate almost everyone over 30 by September.

Sri Lanka has relied on China for most of its immunization program.

The authorities are currently focusing on vaccinating the elderly and those linked to the tourism sector.

BANKGOK – Myanmar is facing a rapid increase in the number of COVID-19 patients and a shortage of oxygen supply.

The situation comes as the country has been embroiled in a bitter and violent political struggle since the military seized power in February after ousting civilian leader Aung San Suu Kyi.

Myanmar weathered last year’s outbreak by severely restricting travel and obtaining vaccines from India and China. His ouster came less than a week after the first beatings were given to health workers.