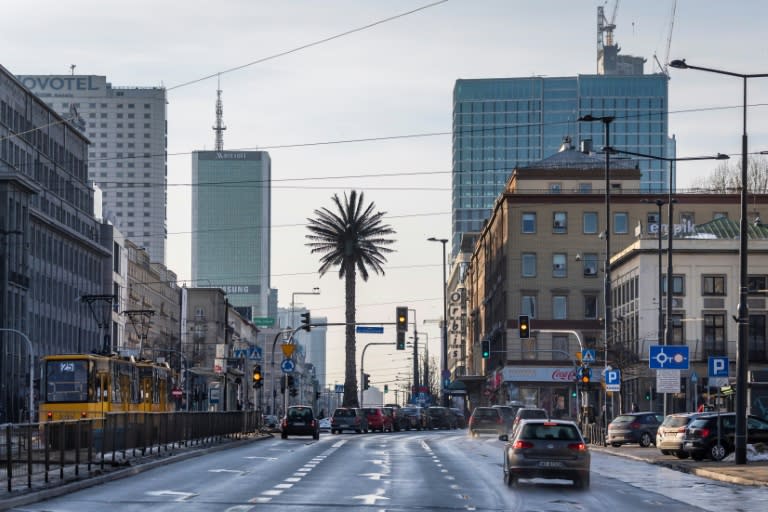 The Solitary Warsaw Palm is coming of age

Tropical is not a word that comes to mind when talking about the gray Polish capital.

Yet a palm tree towering over downtown Warsaw has firmly taken root in the city’s landscape and affections – and is even a popular landmark for postcards.

Located above a busy central roundabout, the artificial tree was born 18 years ago as an art project and is now an exotic rallying point for many social causes.

He donned a giant nurse’s cap in solidarity with protesting nurses, was turned into the Greek island of Lesbos for LGBT activists in bikinis, and had the sheets ripped off by anarchists.

The traffic police stationed on the roundabout are even dubbed “Miami Vice” – a reference to the popular American police show set in warmer climates.

Sebastian Cichocki, curator of the Museum of Modern Art who is the keeper of the tree, said it might appear “alien” and “like something that fell from the sky”, but that’s what captivated the tree. imagination and inspired people.

“The palm is a living object, a disobedient object. Not just an aesthetic work of art, but a generator of social energy … An object on which we can project our own dreams, desires and fears”, has t he told AFP.

The 15-meter (49-foot) tree is a compelling fake: Its steel trunk is covered in real date palm bark and, while its leaves are metal and plastic, that hasn’t stopped birds from nesting. in the crown.

The project arose out of a trip to Israel by Polish artist Joanna Rajkowska, who said she witnessed the “tension and fear” of the Second Intifada, or Palestinian uprising against the Israeli occupation that began at the end of 2000.

“When I returned, what I felt was this overwhelming feeling that the Jews should just be here (in Poland) prosperous and happy and that this land should truly be their home,” she told AFP.

Before World War II, Poland had the largest Jewish community in Europe, but 90 percent died in the Holocaust and most of the rest left.

“The palm tree was created from this void. Really deep sadness that we have lost something, ”Rajkowska said, calling the tropical plant she saw around Israel a“ sign of life ”.

Placed atop one of Warsaw’s main thoroughfares – Jerusalem Avenue – the fake tree also drew attention to the local 18th-century Jewish community who gave it its name.

The palm tree project, named “Greetings From Jerusalem Avenue”, was also a social experiment to see how the Poles would react.

Faced with the exotic specimen on which a Christmas tree stood every year, many locals complained that someone must have lost their mind – or “got hit by a palm tree” as the Polish saying goes.

“There was real disgust, they were shocked,” Rajkowska said of opponents of the tree.

“Especially the taxi drivers. They absolutely hated the palm tree … They were completely embarrassed by the misfit,” she added.

The tree still has its detractors, with one passer-by calling it “unnecessary waste”.

But he grew up on a lot in the city.

“I was surprised at first, but now I can’t imagine the roundabout without the palm. It’s cheerful, relaxing,” retired Malgorzata Blaszczyk told AFP.

“It reminds me of the holidays. How nice it would be to finally, especially now, fly somewhere for like-minded people.”

“It’s good that by changing its appearance, the palm can show us if things are going in the right direction. As a social barometer,” the 44-year-old told AFP.

One of the withered leaves is now part of an exhibit near the palm tree, with a huge nest uncovered on its crown – and a stern environmental warning written by the tree itself.

“Think about it, tens of millions of years ago palm trees grew in Poland… They thrived when you were all still crouching in caves! It reads.

“Do you think about how your descendants will fare in, say, a few hundred years? In what air, what water, what temperature?

“Roll up your sleeves and get to work, or you’ll lose any chance of survival. “