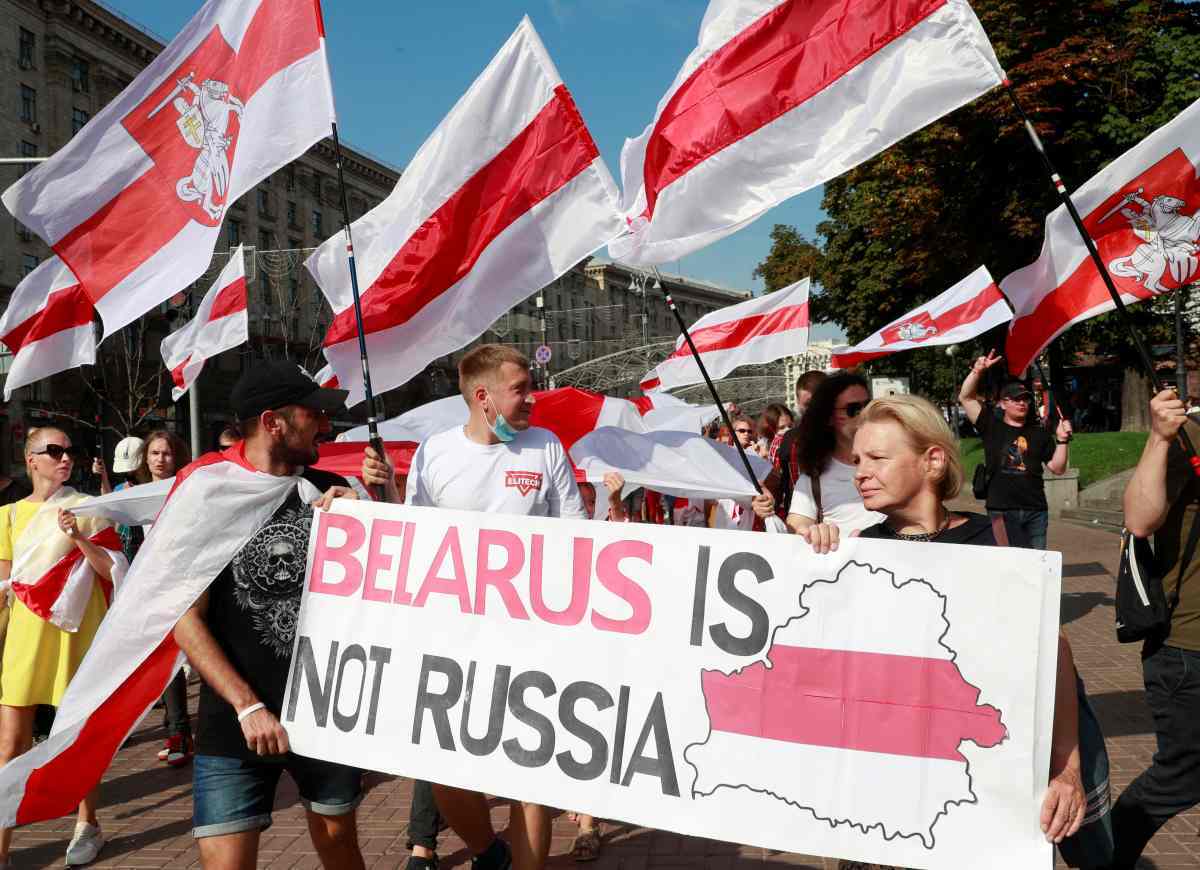 We are still the same people who courageously rose up against the brutal Lukashenka regime in August 2020. From Al Jazeera.

It was on April 11 at breakfast that I heard on New York public radio that Belarusians alongside Russians were banned from participating in the Boston Marathon under the flags of their country. I am not a marathon runner, but as a Belarusian American, the news shocked me. It was another sign of the world overlooking the struggle of many Belarusian citizens against the authoritarian government of Alyaksandr Lukashenka.

Since 1994, Europe’s so-called last dictator has ruled Belarus with impunity, disregard for human rights and freedom of expression, while relying heavily on Russian support. Resistance to his rule peaked almost two years ago, when thousands of Belarusians took in the streets across the country to protest against the rigged election of August 9, 2020.

For a brief moment, Belarusians believed they had a real chance of overthrowing the regime under which our nation of 9.4 million people has lived for far too long. Western democracies applauded the brave protesters and activists.

However, the regime’s response to dissent has been swift and brutal: security forces have responded to peaceful protesters with tear gas, stun grenades, water cannons and even live ammunition. In the first three days after the election, more than 6,700 people were arrested, more than a thousand injured and at least three people were killed by the police. When those arrested were released from prison, their stories shook the nation.

According to Pavel Sapelko, an analyst with the Belarusian human rights group Viasna, the nature of the injuries – broken bones, electrocution injuries, brain damage, broken teeth and trauma consistent with rape – left little doubt. Thousands were tortured in police stations, police vehicles, on the streets or in prisons. In the months following the election, the Belarusian Investigative Commission, the national law enforcement agency responsible for pre-trial criminal proceedings, received 4,644 complaints of physical injuries, other types of police brutality and torture. Not a single policeman has been charged. To date, more than 40,000 people have been imprisoned for political reasons, at least 1,600 people have been convicted of terrorism and extremism, and 1,168 political prisoners remain behind bars.

As before, in 2020 Vladimir Putin supported Lukashenka by sending the Russian National Guard to help local police control the population, propagandists to help control the narrative in the media, and supporting the economy against Western sanctions with a $1.5 billion loan. In early February 2022, Russia positioned 30,000 troops and military equipment in Belarus for joint military exercises. Russia reportedly launched air attacks and missile strikes on Ukraine from Belarusian territory.

I am a documentary filmmaker and journalist. For a year and a half, my colleague Ottavia Spaggiari and I have interviewed dozens of survivors of state brutality, as well as human rights lawyers, activists, academics and police to reconstruct the events of August 2020and explain why it is so difficult to bring dictators to justice.

We stayed in touch with many of our sources even after the report ended. Many of them had to leave Belarus for fear of further repression. For example, one of our sources, Marina, 33, fled Belarus after being incarcerated twice. In August 2020, she and her husband were dragged by riot police from their car parked near their apartment building. In July 2021, she was arrested on absurd charges of participating in a terrorist plot. Fearing a long prison sentence, Marina and her husband first left for Lviv in Ukraine, then settled in Krakow in Poland, less than three weeks before the war. These days, Marina is volunteering helping Ukrainian refugees in Poland.

Another Belarusian, Max, 20 (his name has been changed to protect his identity), left the country in March, after receiving a military conscription notice. Afraid of being sent to Ukraine to fight, he fled to Georgia.

Since August 2020, Belarusians have been leaving the country en masse for Poland, Lithuania, Latvia, Ukraine, Georgia and other countries where they might go. It is difficult to determine the exact number of refugees and migrants, as they travel on a variety of visas, sometimes crossing borders illegally. It can range from tens of thousands to hundreds of thousands.

After Russia invaded Ukraine in the early hours of February 24, I began to hear disturbing reports of changing attitudes towards Belarusians. This made sense, as Lukashenka pledged allegiance to Putin and thus bound his nation to the dreadful assault on Ukraine. However, for the most part, the negative attitudes are directed at people who either fought Lukashenko’s regime or were its collateral damage. To put it bluntly, the victims are victimized again.

My close friends, a married couple, had to leave Minsk in a hurry, fearing for their safety. A few months ago they landed in Tbilisi where they tried to rebuild their lives. After the start of the war, Georgian hospitality sometimes gave way to hostility. Alongside Russians, Belarusians were denied service in shops, cafes and banks. Their Airbnb reservations were canceled and their tires punctured. My friends said they were reluctant to leave their apartment. A few weeks ago they received humanitarian visas and left for Lithuania.

Poland and Lithuania, two EU countries that share borders and centuries of history with Belarus, have welcomed tens of thousands of Belarusians over the past two years. Many Belarusians have found these countries very welcoming, but others, especially since the start of the war in Ukraine, have faced hostility.

In an online survey of Belarusians currently living in exile by activist Darya Churko, the majority of 206 respondents (98%) said they had experienced abuse and persecution – ranging from verbal abuse to settlements. broken lease – because of their nationality. Most incidents occurred in Poland, while Georgia had the second highest number. One respondent, a Belarusian woman, said a Ukrainian man spat in her face after finding out about her country of origin.

This is despite the fact that Belarusians overwhelmingly oppose the war, according to an opinion poll conducted by British think tank Chatham House in March. Of the nearly 900 people questioned, only 3% supported Belarus’ military involvement in Ukraine.

Despite increasing cases of xenophobia and discrimination, many Belarusians continue to support Ukraine wholeheartedly. These include the Kastus Kalinousky battalion of Belarusian volunteer fighters who are now part of the Ukrainian army, and the nonprofit BySol, which has raised more than $100,000 to support the war effort. BySol and the Free Belarus Center helped evacuate civilians from Ukraine. All over the world, members of the Belarusian diaspora volunteer their time or donate money to support our neighbor to the south.

In Belarus, thousands faced the draconian security apparatus to protest the war; more than 800 people were arrested for it. Meanwhile, members of the civil resistance worked to disrupt the movement of Russian troops and their machinery through Belarus into Ukraine.

According to Yuliana Shemetovets, a spokesperson for the Cyber ​​Partisan hacker movement, the group carried out several attacks on the Belarusian Railways automation system that affected operations. Other resisters support the effort by sabotaging signals and trails. Many are risking their lives to help the anti-war movement. More than three dozen “rail supporters” have been arrested so far.

With such sacrifices, it is unfair to tie all Belarusians to Lukashenko’s tyrannical regime. As a global community, we should take the time to better understand the situation. Regarding the Boston Marathon, dear organizers, if I ever decide to participate in an organized sporting event, I will opt for the Vermont Half Triathlon instead.

Olga Loginova is a Belarusian-American documentary filmmaker and journalist based in New York. She is a member of Columbia Journalism Investigations, where she reports on American communities facing extreme climate change. She is a former Voice of America reporter and recipient of RFE/RL’s Excellence in Journalism Award.

Reprinted with permission from AlJazeerawhere this comment originally appeared.