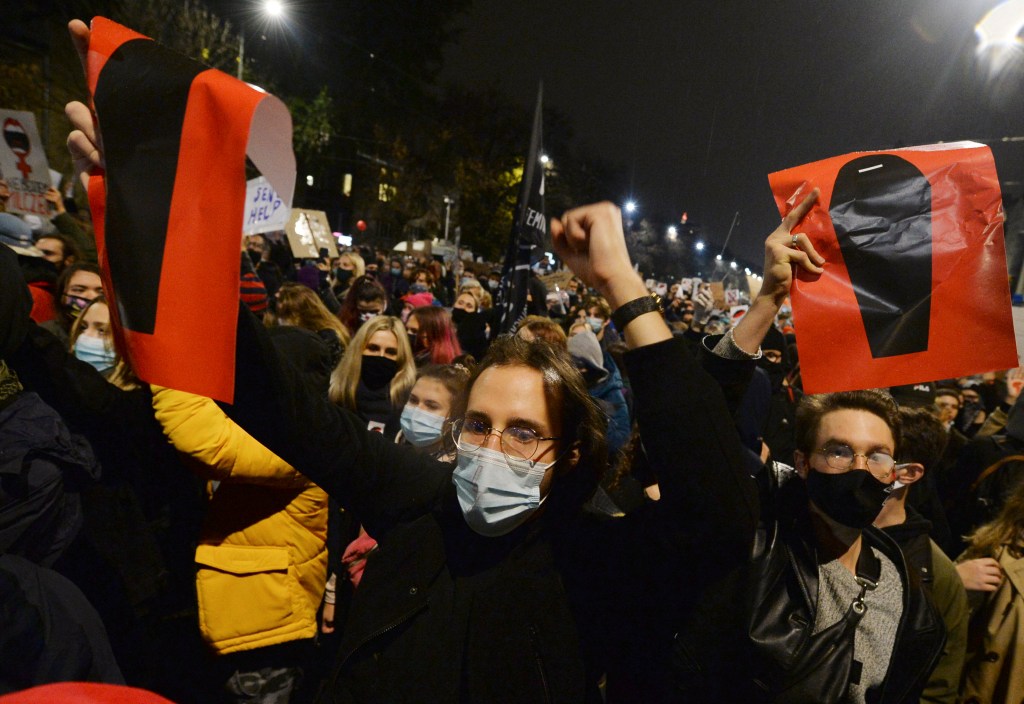 WARSAW, Poland – Tens of thousands of people demonstrated across Poland on Friday in defiance of strict coronavirus restrictions, following Thursday’s decision by the Constitutional Court which imposes a near-total ban on abortion in this predominantly Roman Catholic country.

The court announced that abortions due to fetal malformations were unconstitutional, ending the most common of rare legal grounds for abortion and further distinguishing Poland from the European mainstream.

Thousands of people gathered near the home of Jaroslaw Kaczynski, the leader of the ruling Nationalist Law and Justice (PiS) party, in an affluent area of ​​Warsaw.

For the second night in a row, a cordon of police in riot gear prevented them from reaching his house, using loudspeakers to call on protesters to disperse and respect restrictions on public assembly.

“At first, I was scared but I said to myself, too bad if I caught the coronavirus. I’m afraid for my daughter, but I think we have no choice, ”said Emilia Gwiazda, 46, who took part in the protests in Warsaw.

Polish media estimate the Warsaw protest to number 15,000, despite restrictions limiting public gatherings to 10 in the capital. That number is expected to drop to five starting Saturday.

Thousands of people also took to the streets of the cities of Poznan, Wroclaw and Krakow, footage from the private channel TVN showed.

“Women are not respected in this country. Nobody listens to us, ”said Magda, 34, in the northern city of Gdynia.

Attempts by the PiS to curb the already very restrictive abortion rules in recent years had sparked a public outcry, forcing the party to back down on legislative proposals.

In Warsaw, the protest spread across the city late in the evening, with some marching more than 10 kilometers (6.21 miles) from Kaczynski’s house to central government buildings which were lined with police vans making flash their lights.

Further protests were scheduled for Monday.

From Saturday, new restrictions to curb the spread of the virus are expected to come into force, including a two-week shutdown of restaurants and bars, after new coronavirus infections hit a daily high of more than 13,600 on Friday.

Protesters in Warsaw fired flares, but the protests were largely peaceful, unlike Thursday when some threw stones and police used pepper spray.

PiS lawmakers hailed the Constitutional Court’s decision but dismissed opposition accusations that it influenced it.

Conservative values ​​have taken a more prominent place in public life since the PiS took power five years ago, and access to abortion has declined even without legislative restrictions, with some doctors refusing to perform the procedure. for religious reasons.

After the court decision comes into force, women will only be able to terminate a pregnancy in the event of rape, incest or threat to their health.

Zaneta, a 30-year-old woman from a small town in southern Poland who suffers from an extremely rare genetic condition, ended a pregnancy on Tuesday after the baby was diagnosed with severe deformities.

The decision came as a shock to her.

“I didn’t know you could do this,” she said. “It ends all chances for me to have another child.”