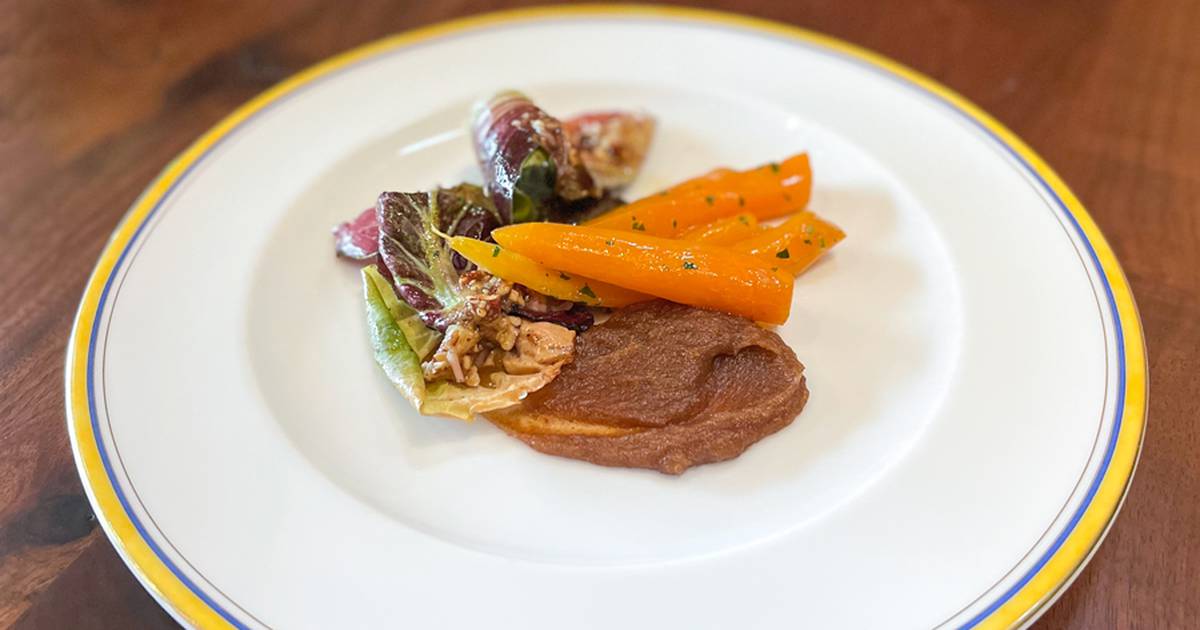 To drive or not to drive |

To be honest, I balked at the thought of a long drive before a meal. It’s hard enough to get all your friends on the same page when it comes to dining without putting 45 minutes between you and lunch, but in the case of a new restaurant NOSA Restaurant and Inn (49 Ranco De San Juan, Ojo Caliente, (505) 753-0881)it seemed more than worth the trip.

NOSA – which the website says means both north of Santa Fe and is an old Spanish word for ‘our’ – opened about six months ago just south of Ojo Caliente (its address is technically in Ojo, but a mate and I blew right ahead on some kind of autopilot powered by a spa) and has since been on the lips of many local foodies. It’s easy to miss with its nondescript driveway in an area we’ll call remote and, frankly, will likely be a nightmare in the snow. Still, we managed to arrive early enough to take a brief look around campus: four rooms available on Airbnb and a pair of cozy dining rooms. Think minimalist with high ceilings and a quiet but warm vibe; a charming and tastefully decorated Christmas tree stood in the corner and I wondered aloud if the main space might have been a church at some point (although I later learned that it wasn’t). was not the case).

The restaurant and inn are both operated by chef Graham Dodds, a Dallas son with British parents, decades of culinary experience and schooling in Portland, Oregon’s Le Cordon Bleu College of Culinary Arts (formerly Western Culinary, at least when Dodds was there) and the real Cordon Bleu itself, the latter for baking. His story is familiar: Dodds visited Santa Fe on a road trip in the 90s, fell in love and, he tells SFR, always knew he would definitely return.

The premise of NOSA is simple yet appealing: Dodds experiments and creates rotating lunch and dinner menus based on the freshest ingredients available. There’s an art, he says, to consistently making the same dishes over and over and keeping them high quality; he, however, prefers to flex his creative muscle.

“My original intention was to have an a la carte menu,” Dodds told me the day after we visited NOSA, “so I wouldn’t commit to this multi-course tasting. It’s just me preparing the food and running the business, and it’s a lot for me to take a multi-course menu. But we’re sort of progressing with the storyline, and I think it’s good to kick it off with the multi-course thing, although I think eventually it would be nice to have a more laid-back side to it.

My companion and I were unaware of all of this when we visited, however. With visions from the recent film by Ralph Fiennes The menu (where pompous foodies go to a secluded high-end restaurant and earn their just desserts) dancing in my head, the promise of a prix fixe menu traversing various vegetables, nuts, proteins and sweets was alluring but intimidating. My tastes tend to hover in the middle of the single dish / smother with the chili, but Dodd’s menu this particular Sunday appealed to me with ingredients like Jerusalem artichokes (a cousin of the artichoke that somehow has more artichoke flavor than the artichoke itself) and hinona kabu turnips. In other words, things that don’t show up on every menu here.

First off, I can’t say enough good things about our server. Although NOSA was indeed small and did not fill up during our 2pm lunch, it is never easy to go it alone, and she ran the room with grace and kindness. That said, we waited 2h40 before our first course arrived. At $65 per person ($85 for dinner), you think things could happen in a timely manner, and I get that Dodds is almost always alone in this kitchen, but it might be time to hire some backup.

The first dish of spinach dip made with the aforementioned Jerusalem artichoke was a flavor and texture revelation. The grilled parmesan brioche added cheesy flavor, as well as a satisfying crunch and sweetness; these Jerusalem artichokes should be on my shopping list now. We made our way through another phenomenal course of braised baby carrots with radicchio and pecan salad and date puree. Usually with purees, I can’t help but think, “Thanks for the dough, I guess.” Dodds, however, crafted a sublime, light little number that melted almost like cotton candy on the tongue and exploded with a semi-sweet flavor that complemented the earthy braised carrots brilliantly. This course is why you would drive 45 minutes for lunch – so ultimately simple, yet so perfectly executed.

The last three courses unfortunately left something to be desired. For example, triple-cooked Yukon Golden Potatoes were practically equivalent to french fries with a little too much vinegar. And the chicken pot pie…well, Dodds used what amounted to a flaky biscuit for the crust, and while its exterior achieved golden brown perfection, its innermost sections remained slightly mushy and undercooked. Dodds later told me that he was still acclimating to high altitude cooking, and I completely understand that – we’ve all been there. Even so, the chicken inside seemed like dark meat, and while one wants a pie to be tasty, this one was tragically too salty.

At this point, almost three hours later, we started to squirm and worry about getting back to town before dark. The final course, a so-called chocolate puddin, softened the blow, but only slightly. It was obviously fresh out of the oven, causing the whipped cream included in its heat and dulce de leche base to separate to scald the tongue rather than increase the flavor. The cake itself was tasty and gooey and served in what I can only describe as a lovely mini cast iron cauldron, and that part I loved.

Presentation, however, is not the problem at NOSA. In fact, the room itself, the plating and the atmosphere are all wonderful. The concept is also there in the spirit, and it feels rather special to eat in a faraway dining room on the edge of nowhere. Look, maybe it’s naive to think you could make a five-course meal in less than three hours, and if that’s how it is at NOSA, I’d gladly swallow my words. But from where I was sitting, the meal took too long. That said, Dodds’ experience is about to grow, and it was cool that he stopped by to say hello. With a little help and a little extra time, we could be talking about something really special. For now, however, I would suggest waiting a bit longer if you plan to visit. Even an extra month could make all the difference.

Cabinet briefing: Airbnb and hosts face penalties if they fail to notify short-term rentals on the new register