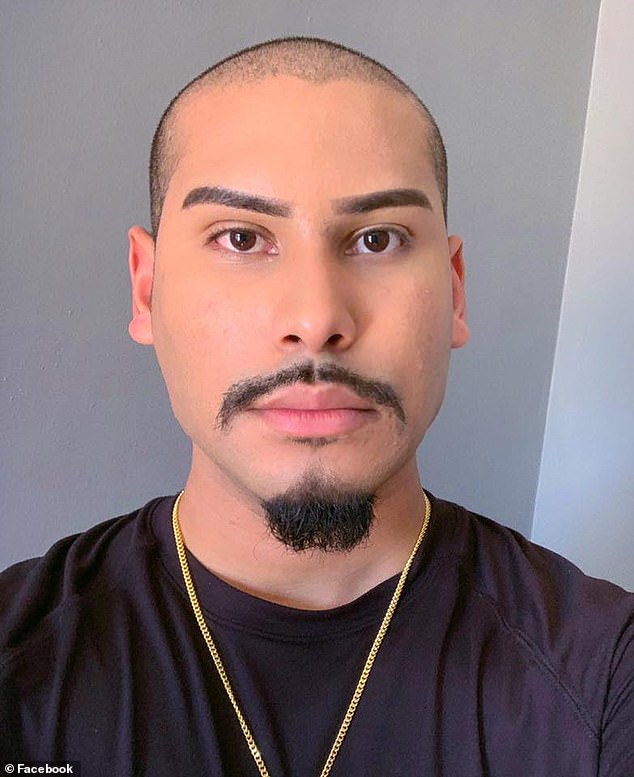 A UCLA student who was vacationing in Rio de Janeiro, Brazil, died Friday after being shot by a stray bullet in a shootout with drug dealers and vigilantes.

Trey Barber, who lives in Los Angeles, was shot in the back of the neck three days earlier before succumbing to his injuries, the US consulate in Rio and the Samaritano Botafogo hospital have confirmed.

The 28-year-old language specialist, who was preparing for his doctorate, was visiting a friend in Cascadura when the stray bullet was fired from Fubá hill and entered the apartment he was staying in.

Barber allegedly reached for the TV remote when he was hit, brazilian news outlets reported.

Barber was rushed to hospital and kept on a ventilator while being treated after the fatal gunshot. He was unfortunately pronounced dead on Friday.

Tributes poured in for the American tourist – who was heralded as a ‘shining light in this world’.

Trey Barber, 28, tragically died of a stray bullet in Brazil, where he was on vacation. The scholar was two years into his program at UCLA to study Portuguese language and literature. He previously earned his bachelor’s degree from UCSB in the same field of study, according to his LinkedIn account. 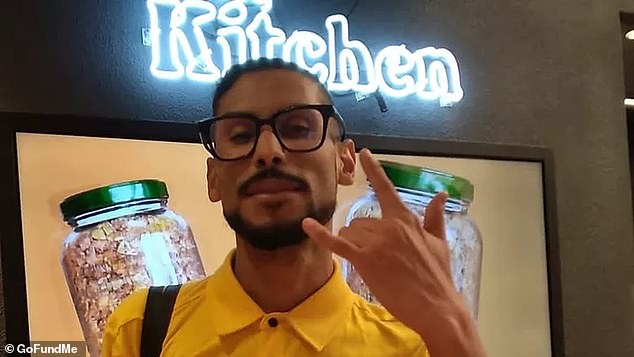 Trey Barber, initially identified by police as Joseph Trey Thomas, died in Rio de Janeiro on Friday after being shot in the back of the neck while visiting a friend. 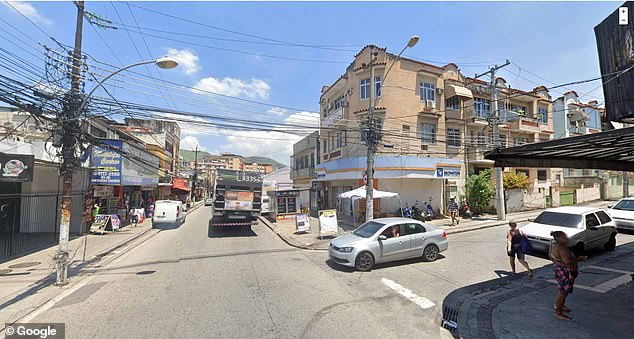 PICTURED: Cascadura neighborhood where Barber was shot on August 9 while visiting a friend in Rio de Janeiro

Family and friends have also set up a GoFundMe page to raise $15,000 to help bring his body back to the United States after he died while on vacation.

It read: ‘We are raising funds for the family of Trey Barber, who died in Rio de Janeiro on Friday, three days after he was shot dead in a clash between local drug dealers and vigilantes.

“Trey was in Brazil on vacation, a place he loved with all his heart.”

Barber was a doctoral student at UCLA at the time of his death, where he also taught language classes.

The scholar previously earned his bachelor’s degree in 2018 from UC Santa Barbara studying Portuguese language and literature, according to his LinkedIn account.

Jenny Choi contributed to Barber’s funeral expenses while remembering her late classmate as “funny” and “kind” with a “shining soul.”

She wrote: ‘Trey and I met at school, we got particularly close last year before our masters degrees.

“I have never met someone with such impact for the few words he said, and we often recognize his talent with words.”

“Trey often helped set up zooms so I could attend classes remotely when ill, and I will always be grateful for his kindness and generosity. We check in on each other during our most stressful term yet, encourage each other to do well on our master’s exams, looking forward to our summer travels and relaxation.

Choi concluded, “My heart aches for Trey and his family. He has already told me how close he was to his mother and how loving and supportive everyone in his family is. 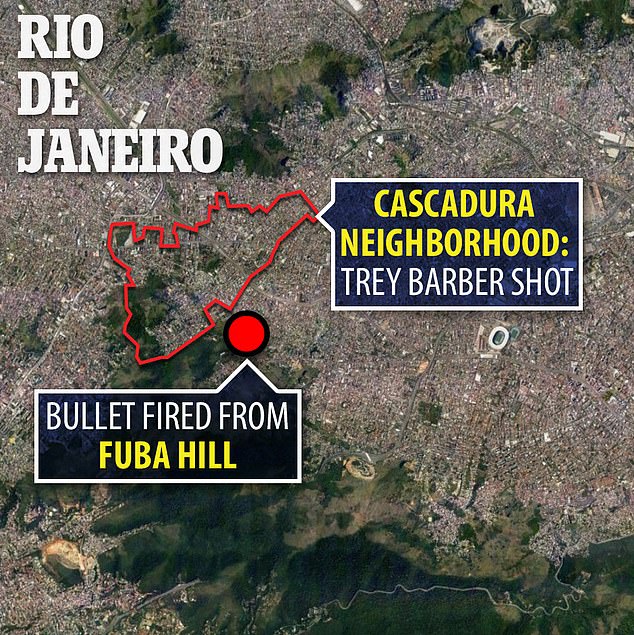 It’s unclear where Trey was staying in the Cascadura neighborhood (highlighted in red), but the shots were fired near Fubá Hill 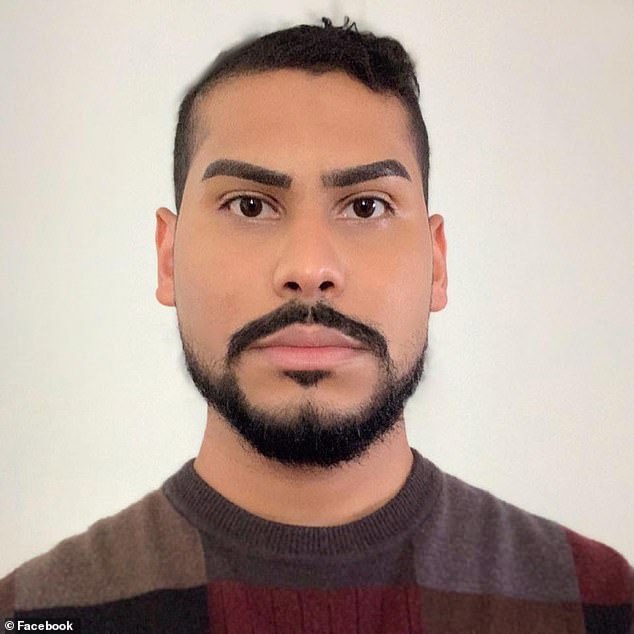 Barber sought a career as a future translator. His family and friends are now trying to raise money to bring his body home 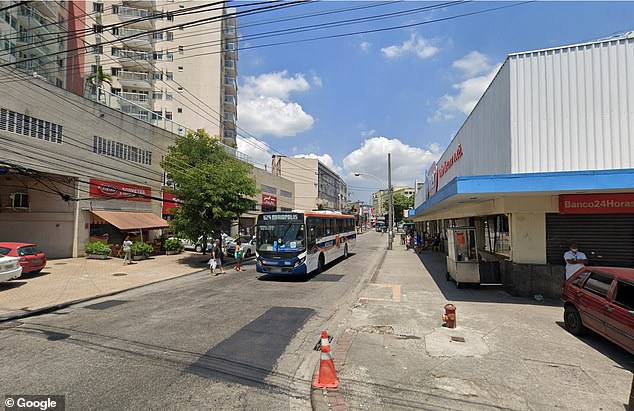 Pictured: Cascadura neighborhood where Barber was shot. He was taking a television remote control when a stray bullet hit him in the back of the neck, according to local reports. 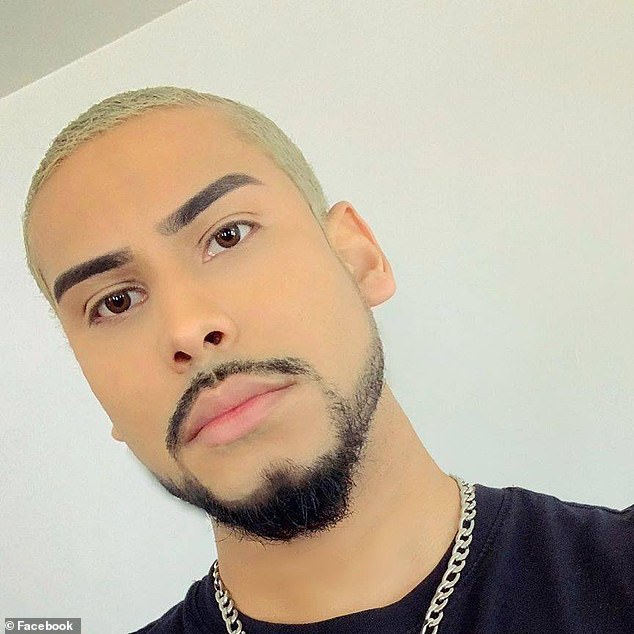 A former classmate remembered Barber as “funny” and “kind” with a “bright soul”. On a GoFundMe donation comment for Barber, Jenny Choi said he was close to his “loving” and “supportive” mother and family.

Barber sought a career as a future translator and enjoyed learning the meaning of certain Portuguese phrases that cannot be translated into English, according to UCLA Graduate Student Page.

“I hope to focus my future research on meaning and equivalence as it relates to translation from one language to another, which in my case will specifically focus on translations from Portuguese to English and possibly vice-versa. “, wrote Barber.

According to the Instituto Fogo Cruzado, which lists shootings in several Brazilian cities, 116 people were shot dead in the Rio metropolitan area in 2021.

Twenty-four of them died.

Tahoe program offers $24,000 to landlords who rent to premises