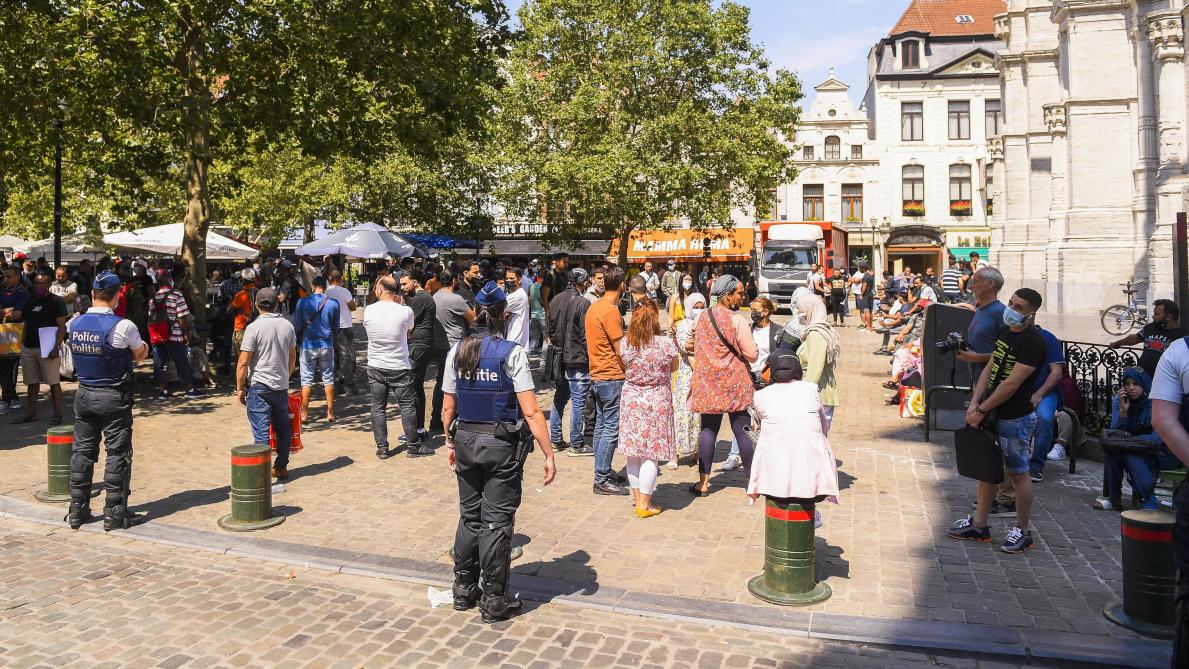 Undocumented migrants present in large numbers in the neutral zone

The hunger strike of some 430 undocumented people demanding the definition of clear regularization criteria ended on Wednesday afternoon of last week.

EAbout 200 people were again present this Monday morning in front of the space converted into a “neutral zone” rue Melsens in Brussels, near the Beguinage church, one of the three sites where the hunger strike took place. hundreds of undocumented people. They are supervised by the police. This place is a place of dialogue reserved only for hunger strikers, insisted Monday the spokesperson for the Foreign Office Dominique Ernould.

The hunger strike of some 430 undocumented people demanding the definition of clear regularization criteria ended on Wednesday afternoon of last week. The next morning, people who have been in an irregular situation for a long time flocked to the neutral zone. This was opened by the Secretary of State in charge of asylum and migration Sammy Mahdi (CD&V) on the sidelines of the hunger strike in a desire to open a dialogue with the strikers. He proposed to individually review their files on the basis of existing legal provisions.

The strikers initially refused this outstretched hand. Some undocumented migrants who were not on strike took advantage of the availability of agents in the neutral zone, during this latency period, to get information. As of Thursday morning, the police surrounded the crowd made up of undocumented people from all over the country.

Friday morning, the services linked to this space for dialogue indicated that the place was no longer accessible to only hunger strikers. Dominique Ernould believes that the message should take a few days to pass. “Many people think that it is a collective regularization operation, which is not at all the case”, explained the spokesperson for the Office of Foreigners. “Undocumented people who are not strikers must follow the normal procedure by submitting their requests through their municipalities. Established procedures. Many received a negative response several years ago, but nothing prevents them from reintroducing a request through their municipalities with new elements and reinforced arguments. It is estimated that more than 100,000 people are undocumented in Belgium and it is impossible to receive them in the neutral zone. It would be unmanageable. “

Since 2018, half of the finalized regularization requests have responded positively. In 2020, there were nearly 1,850 positive decisions which allowed the regularization of around 3,500 people, a file that could bring together several people. In comparison, from 2014 to 2016, around a thousand people per year were regularized, with a decision positivity rate ranging from 10 to 20%. The number of regularizations rose to nearly 1,450 in 2017 (4,500 files entered and finalized), then to 2,300 in 2018 (more than 2,500 completed requests) and to just over 3,300 in 2019 (nearly 3,000 requests). In 2020, people of Moroccan nationality were the most rejected, followed by those from Armenia and Albania and then by the Congolese.