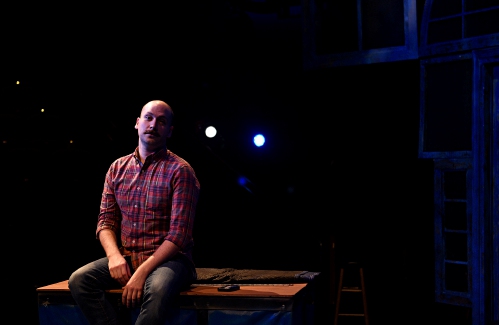 Watching the award-winning Tony adaptation of Once Several years ago, Northern Stage Artistic Director Carol Dunne decided to stage it one day.

When you run a theater, you can make some of your wishes come true. Northern Stage production Once is in preview Thursday and Friday and opens Saturday evening.

She also had the wish to polish the decor of the play, moving it from the bar where most of the action of the Broadway show takes place and to the streets of Dublin. The 12 performers of the show will also sing and perform in the aisles of the Center des arts Barrette.

To help Dunne bring that vision to life, Norwich native Alexander Woodward is now a New York-based stage designer who created the look for Northern Stage’s fall 2017 productions. A doll’s house and of Frost: this matter of worms.

For a large part of Once set, Woodward and the Northern Stage production team mined scenic gold at the nearby Recover Store, which sells furniture, building materials, and housewares donated to raise funds for weather protection programs and COVER home improvement for low-income residents of the Haute Vallée.

“Lots of shutters, windows and doors,” Woodward said this week. “It’s exciting when we can make the setting look real and help the community.

It was the Upper Valley theater community that helped Woodward find his calling. At Marion Cross School, teacher Tracy Smith encouraged her talent for the visual arts, and at Hanover High School, Bill Hammond, director of The Footlighters, asked her to design sets for the three annual musicals.

“Mr. Bill was like, ‘This is a real thing,’” Woodward recalls. “’You should go out and do it. You should believe in yourself. Your dream is achievable. ‘ “

Encouragement from his teachers and internships with Opera North prompted Woodward to pursue first a bachelor’s degree in design at Ithaca College, then a master’s degree in set design at the Yale School of Drama. He has overseen stage design for the past several years at the Williamstown (Mass.) Theater Festival.

“The great thing you learn is that you can’t work in this medium as a solo artist,” said Woodward. “There are so many people to interact with. It’s like an architect who works with a team of engineers.

Woodward ranks his collaborators at Northern Stage, particularly production manager Jess Johnson, along with everyone he’s met from Broadway to the Berkshires and across the country.

“Thanks to Jess, it felt effortless to me when we were doing The doll’s house and Gel to the repertoire, ”he said. “It was exciting to take two pieces, like a puzzle, and keep taking them apart and putting them together. It was nice to have a salty and a sweet.

Dunne said it was nice to have a designer who grew up and started learning the ropes in the Upper Valley to set the scene.

“He’s from that culture,” Dunne said. “It’s another example of how the theater has developed here.”

Northern Stage launches production of this week, with previews Thursday and Friday evenings at 7:30 p.m. at the Barrette Arts Center in White River Junction. It officially opens on Saturday evening at 7:30 a.m. and continues until May 19. Northern Stage also hosts open mics in the lobby before each performance, during which Upper Valley musicians are invited to perform to get tips from customers. For tickets ($ 19 to $ 59) for shows and for more information, visit Northernstage.org or call 802-296-7000.

The Seldom Scene weaves bluegrass beats through country, rock and pop to Chandler Music Room at Randolph on Friday evening at 7:30 p.m. Line-up includes Dudley Connell on guitar, Lou Reid on mandolin, Ronnie Simpkins on bass, Fred Travers on dobro and Ron Stewart on banjo and violin. For tickets ($ 30 to $ 35) and more information, visit chandler-arts.org or call 802-728-6464.

Pete McBride screens In the canyon, his documentary about his 750-mile journey through the Grand Canyon in 2016, Saturday night at 7 a.m. at Dartmouth College’s Spaulding Auditorium. For tickets ($ 5 to $ 15) and more information, visit hop.dartmouth.edu or call 603-646-2422.

■ Party Crashers return to Plainfield Town Hall Saturday evening at 7:30 p.m. to play the soundtrack of the annual Hand to Heart fundraising dance and silent auction. Admission is by donation to the Hand to Heart program of free home massages for patients with advanced cancer.

Taming, comic adaptation of Shakespeare Taming the shrew, directed by Shaker Bridge Theater To Whitney hall at Enfield. Performances on Thursday, Friday and Saturday evenings before closing on Sunday afternoon. Tickets cost from $ 16 to $ 35.

■ Fifth Business, roots / Americana, monthly Coffeehouse Cabaret on Saturday evenings from 7 to 10, at Common Arts of the North in Chelsea. Entry $ 10.

■ Singer-songwriter Ken Macy, Friday night at 9 p.m. at Salt Hill Pub in Lebanon; Off the List, rock and pop, Saturday night at 9 a.m.

■ Singer-songwriter Alison “AliT” Turner, Friday night at 9 am at Margaritas in Liban.

■ Jazz pianist Sonny Saul, Wednesday evening at 6.30 p.m. at On the river inn in Woodstock.

Taylor Ho Bynum conducts the Barbary Coast Jazz Ensemble through one of the Hopkins Center’s free and informal live Thursday night programs at Top of hops next Thursday evening at 9 o’clock.

Jaclyn Baumgarten of Boatsetter talks about the ‘Airbnb’ boat