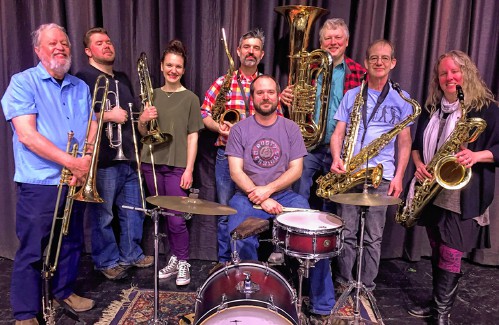 On Friday night, outside the Barrette Center for the Arts in White River Junction, seven seasoned jazz musicians will help the now retired Norwich resident bring his dream to life.

“At this point I don’t know how people are going to react,” Glasgo, of Norwich, said last week. “Will it be: ‘This is great! Or “Why do we need this?” I just know it’s a great co-op group with a diversity of ages that likes to play together.

The relationship started out as a one-off show for a good cause. During the inauguration serenade of the Rusty Berrings Memorial Skatepark in West Lebanon last October, Glasgo felt a spark among the jazz veterans he had recruited for the occasion, enough to engage in months of repetition.

The group’s co-leader, Brunet, grew up in New Orleans and played professionally for years before moving to the Upper Valley about eight years ago to work at the Veterans Affairs Medical Center in White River Junction.

“The first time I heard Chad play the drums,” Glasgo recalls. “It was like, ‘Omigod! He’s got the cold New Orleans thing.

Shortly after the skatepark appeared, Glasgo noticed comparable chops in Smith and the Conertys, during a tribute concert to soul music legend Otis Redding. Then he recruited Stumpff and Geilich, the last of the first Glasgo players on the Barbary Coast.

At Friday’s show and the Hartford Community Coalition’s block party at Lyman Point Park on Wednesday night, the new unit will perform a mix of members’ compositions and covers of classics.

“We have really developed a good feeling for each other,” Glasgo said last week. “It’s like going to church every Sunday with these people: making music, cheering us up together.”

White River Indie Festival kicks off Friday afternoon with documentary by Hanover native Rick Moulton Voice of America: Lowell Thomas and the Rise of Broadcast Journalism. Following the screening, which begins at 3 a.m. at the Byrne Theater at Northern Stage in White River Junction, Moulton, who now lives in Huntington, Vermont, will discuss the film with West Lebanon writer and editor Jack Beatty and writer Mitchell Stephens. , author of the biography on which the documentary is based.

“Our film is important to anyone who cares about the state of the news and the crisis of faith in our free press,” Moulton said last week. If you don’t yet have a weekend pass for the festival, which runs through Sunday, admission at the gate is $ 5 to $ 10.

The festival continues Friday night at 7 a.m. at the Byrne Theater with the world premiere of Thrasher Road, the movie from Plainfield director Samantha Davidson Green about a pregnant single woman returning to her native Vermont after basing her best-conceived plans in Los Angeles.

And among screenings of three shorts from Vermont directors on Saturday afternoon at 4:30 p.m. at the Byrne Theater, Norwich filmmaker Ben Silberfarb will unveil his new drama. Hiking, about a couple meeting a threatening stranger on a backpacking trip.

To learn more about these and other festival events, visit wrif.org.

Pianist Keane Southard plays “Music from Four Continents” at the First Congregational Church in Thetford on Saturday afternoon at 1am. He recently performed his new composition, A symphony of the Appalachian trail, on Vermont Public Radio. Free entry.

The Metamorph duo of Margot Day and Kurt Knight perform electronic dance music on Saturday night at 30 Summer St. in Bradford, Vermont, to kick off the Summer Street Music series. The music starts at 7:30 a.m., after a potluck dinner that starts at 6:30 a.m. Admission is $ 10. After the performance, musicians and listeners are invited to sit on an open mic session.

The LATOQC trio performs and sings Quebec and Cajun music at the Seven Stars Center for the Arts in Sharon on Saturday evening at 7:30 p.m. Admission is $ 20 in advance and $ 25 at the door. The ensemble will also lead a workshop on their genres at the center between 1 and 6 o’clock in the afternoon, at a cost of $ 30. To book tickets, register for the workshop and learn more, visit sevenstarsarts.org.

Celia Woodsmith and her Say Darling quintet perform an Americana music ensemble at The Skinny Pancake in Hanover on Saturday nights at 9 a.m. For tickets ($ 12 to $ 15) and more information, visit skinnypancake.com or call 603-277-9115.

Old Church Theater launches its two-weekend production of Pride @ Prejudice Friday night at 7:30 p.m., in the temporary theater house at 176 Waits River Road in Bradford. Until June 10, this affectionate parody of Jane Austen’s novel of good manners follows the roller coaster romance between Mr. Darcy and Elizabeth Bennet through blogs and internet chat rooms. To reserve tickets ($ 6 to $ 12) and learn more, visit oldchurchtheater.org or call 802-222-3322.

Roots musicians Chloe Powell and Justin Park kick off BarnArts’ weekly Music on the Farm series this afternoon at 5:30 p.m., with a performance at Fable Farm on Royalton Turnpike in Barnard. The series continues Thursday afternoon with a performance by folk-rocker Spencer Lewis and his friends.

Folk singer-songwriters David Surette and Suzie Burke perform at the Sunapee Community CoffeeHouse Friday night at 7 a.m. at the Methodist Church in Sunapee Harbor. Admission is by donation.

The Jubal’s Lyre chamber quartet performs works by Baroque masters Dieterich Buxtehude, Georg Philipp Telemann, Domenico Scarlatti and Francesco Manfredini on Friday night at the Seven Stars Arts Center in Sharon. Admission to the concert, which starts at 7:30 p.m., costs $ 15 in advance and $ 20 at the door. To book tickets and learn more, visit sevenstarsarts.org.

The a cappella ensemble Harmony Night gives its annual spring concert at the First Congregational Church of Lebanon on Saturday evening at 7 a.m. Admission is by donation.

On the theme of “Drama Queens”, the Cantabile Women’s Choir is giving two concerts this weekend to celebrate the female choirs of opera, Broadway and cinema. The mini-tour begins Saturday afternoon at 4 p.m. with a performance at the Norwich Congregational Church. And Sunday afternoon at 4 a.m., the ensemble will fill the First Congregationalist Church of Lebanon with their voices. Admission is $ 5 to $ 15. To book tickets, visit cantabilewomen.org.

Saxophonist Michael Parker and guitarist Norm Wolfe play the Foreign Wars Veterans Station at White River Junction Friday night at 7 a.m., collaborate with bassist Peter Concilio on a show at Carpenter & Main in Norwich on Tuesday night at 7, then move on to perform together Wednesday nights at 6 at the Quechee Inn in Marshland Farm.

Speaking of Gladys frontman Rich Thomas kicks off the weekend at the Salt Hill Pub in West Lebanon with a solo acoustic rock and pop set Friday night at 9am. And Saturday night at 9 a.m., acoustic rocker Alec Currier calls.

The Brian Cook Band plays R&B, country, folk and some of the trio’s compositions Saturday night at 6 p.m. at Big Fatty’s BBQ in White River Junction.

Pianist Sonny Saul plays jazz at the On the River Inn in Woodstock on Saturday and Wednesday evenings from 6:30 p.m. to 9 a.m.

Soulfix is ​​playing at the Farmer’s Table in Grantham on Saturday night at 7 a.m.

String players of all ages and skill levels are welcome to attend the weekly acoustic jam session at BALE Commons in South Royalton on Friday evenings from 6:30 p.m. to 10 p.m.

Joe Stallsmith conducts his weekly Americana, folk and bluegrass hootenanny on Monday nights at 6 a.m. at the Salt Hill Pub in Hanover.

Woodstock musician Jim Yeager hosts open mics on the following evenings over the coming week: at Bentley’s Restaurant in Woodstock on Mondays at 7:30 am; at the Public House in Quechee on Tuesdays at 6 a.m. Wednesday 8 am to midnight at the Skunk Hollow Tavern in Hartland Four Corners; and next Thursday at 7 a.m. at the ArtisTree Community Arts Center in South Pomfret.

Make money with an Airbnb property in Dubai