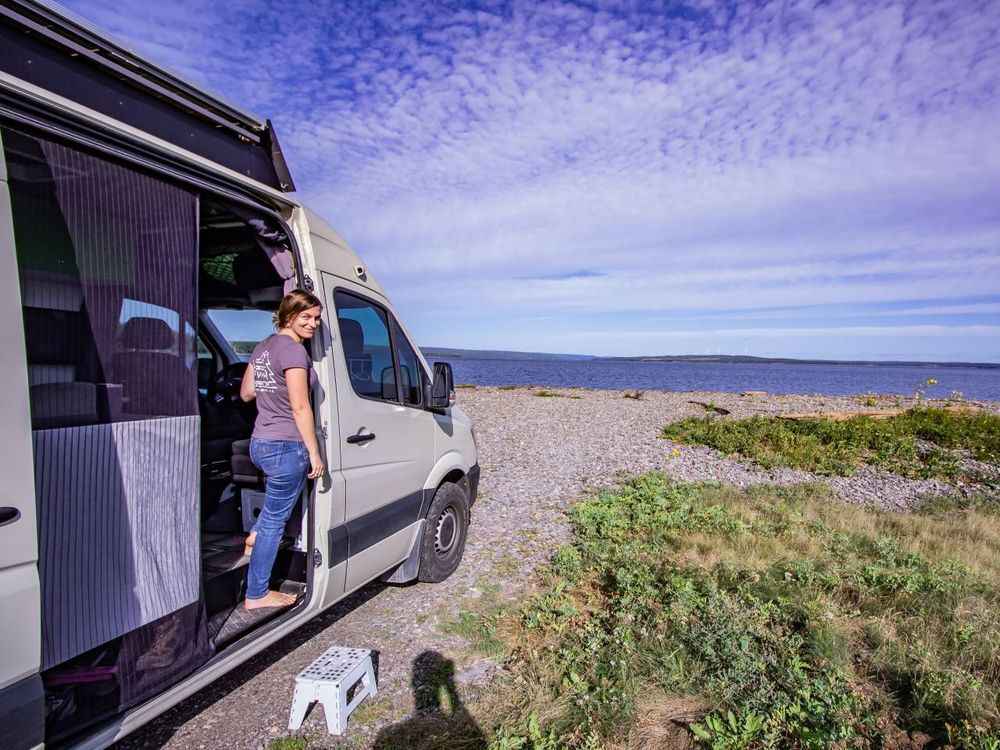 At the start of the pandemic, Eric Kehoe, 32, had his van parked in the Rockies in British Columbia

Kehoe loved living in a van for years before the pandemic. For him, it was a way to reduce some expenses, while enjoying the freedom to travel and invest in his first mortgage in Ontario.

During the lockdown, vans like Kehoe’s – which were already converted into mini homes – saw their prices skyrocket as demand grew.

Kehoe then decided to sell his van and use the extra money to pay for an apartment in Kelowna, BC, a place that allowed him to pursue his passion for hiking and mountain biking.

While the RV industry was booming before the pandemic, lockdowns accelerated that growth, prompting van life enthusiasts to start their own businesses.

“The RV industry as a whole is growing 30% year over year,” said Jeremy Vandermeij, co-founder of Van Dads in Toronto.

Officially launched in October, Van Dads – a company that designs bespoke motorhomes – started when Vandermeij and his business partner Gui Figueiredo traveled across the country during lockdown.

“Our initial motivation was definitely to get out of our apartment and see the world. But as soon as we got back from the trip, which was September 20, 2021, we were like, ‘Okay, let’s do this,'” Vandermeij said. .

“I built a website and a business model,” he said. “We started getting press, I think in November. About 25,000 people visited our website and 1,000 people contacted us.

“Every week we talk to a potential new client who wants to understand the process and the costs,” he said.

Not just for retirement

Van Dads’ clientele is diverse. They have a couple in their twenties leading a cat rescue from their van. They have another couple in their 40s, with a baby, who want the freedom to travel during the summer. Another client operates a facial care business out of his van.

“I believe a motorhome vacation is 60% cheaper than a normal vacation because you save money on food and accommodation,” Vandermeij said. However, it can be expensive if people decide to go to a federal or provincial park.

Canadians must pay fees to enter government parks, as well as overnight fees if they want to camp.

“But there are also private parks that are very, very affordable,” he added.

However, the price of the van itself may deter some people from taking the plunge. The current cost of converting a van into a fully functional tiny home is between $50,000 and $130,000.

“It’s definitely a high price [for a van]. Some people would consider it a big expense, but it depends on where you are in your life,” he said. “I don’t think owners retiring are a big expense for them. Many of them have long dreamed of living on the road.

Most recreational vehicles are not usable in the winter and may not be worth the price for some users. Van Dads products can be used all year round and they are off the grid, using solar energy.

“All the water system and the electrical system are inside the body of the van, which is not the case with a normal motorhome,” Vandermeij added.

Madison McNair and her husband, Raynor Vickers, started living in a van two years before the pandemic. They then founded Ray Outfitted during COVID-19, another company that designs custom RVs.

Opened in June 2021, Ray Outfitted is located near Port Severn on the southeast shore of Georgian Bay in Ontario. The 2,600 square foot store transforms vans into fully functional mini homes. Like Van Dads, their vehicles are designed to be used all year round.

“The bespoke ‘vanlife’ custom layouts we now do typically include four-season and off-grid capabilities,” McNair said. “That includes luxuries like radiant heated floors, 12-volt air conditioning, and large battery banks that let you do things no conventional RV does, all without the roar of a generator.”

The exterior of their van also has a tilting solar panel and the ability to carry adventure bikes and/or tow other vehicles.

Some retrofit their vans for business

Since its launch, Ray Outfitted has converted five vans, and three are in progress. Six of the eight vans are for doctors.

“I can’t believe how many doctors we’ve had the honor and pleasure of working with,” McNair said.

“These can go to senior care homes and do all the ear tests rather than moving seniors from the care home to a clinic and back,” she said.

But there are also doctors who need to disconnect from the hustle and bustle of everyday life.

“It could be for mountain biking, it could be just a place to have the fridge and the microwave and the bed and their bike,” McNair added.

There are also customers who collaborate with Ray Outfitted to bring their own designs to life. McNair says the companies have done about 300 DYI collaborations. Some clients even bring their vehicles so that McNair’s husband, who has the technical expertise, can check to see if their work is right.

While there are plenty of DIY resources out there, it can be a good idea to honestly assess your level of technical skill before embarking on a van conversion. McNair says some people have started electrical fires in their vans due to faulty setups obtained from DIY videos.

As the trend explodes, there is a need to collect data on who is opting for van life and why.

McNair, who previously worked with Seeker – an American tech startup – enlisted the help of his former colleagues to try to decipher the demographics.

“The reality is that the best data we could find is the US census on ‘alternative housing,'” she said. But the census does not distinguish between those who choose this lifestyle primarily for affordability, instead of other reasons such as the freedom to travel.

For the census, vans fall into the category of “manufactured homes,” which is a category that also includes mobile homes or trailers. Manufactured homes housed about 18 million residents in 2010, according to the US Census Bureau, rising to 20 million in 2010. This category accounts for more than 6% of the nation’s total housing stock.

The pandemic has given people pause. It has inspired some to opt for the van life, which has spawned new businesses and, at times, new epiphanies.

For Kehoe, his revelation is that he wants to be a digital nomad. The realization led him to start an accounting course.

“As soon as this course is finished, I can start working strictly from my computer, and then it won’t be a van life for me anymore, it’ll be more like a long-term Airbnb all over the world.”

This article provides information only and should not be construed as advice. It is provided without warranty of any kind.