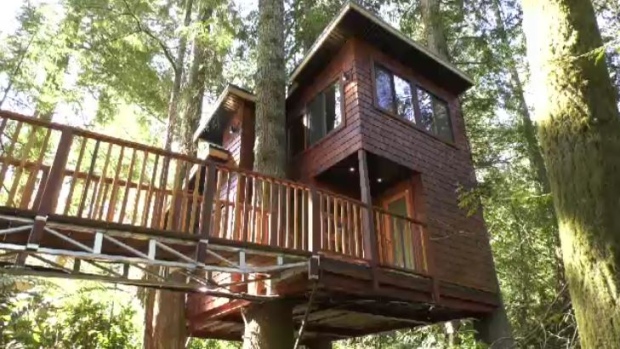 VICTORIA – Many of us are proud of our pandemic plans, all the things we normally couldn’t have done without a little extra time.

Now, a particularly skillful pair of hands have just put the finishing touches to an incredible treehouse in Sooke, BC.

Tyler Bohn is a carpenter by trade and began building a treehouse for his children when the pandemic began.

“By the time we got down to it, it ended up being too fun for the kids,” he told CTV News Wednesday.

While the mention of a treehouse may conjure up images of a rickety structure and house, Bohn’s treehouse is anything but.

“Is this an open concept treehouse?” Bohn said, describing the treehouse.

“I just used the codebook and kind of designed it. I scoured the internet and a few photos that I liked and then put it all together,” he said.

The treehouse has a loft-style living room, kitchen and master bedroom.

It even has a TV and electricity to enjoy the creature comforts more associated with a home than a treehouse.

After the treehouse was completed, Bohn and his co-owner Madison Gronter began renting it out as an Airbnb.

It opened to guests on April 1 and was an instant hit.

“We booked our first two months before even opening,” said Gronter.

The couple say the treehouse has been a success so far and they like to read the comments left in their guestbook.

“We’re getting a lot of good feedback,” said Gronter.