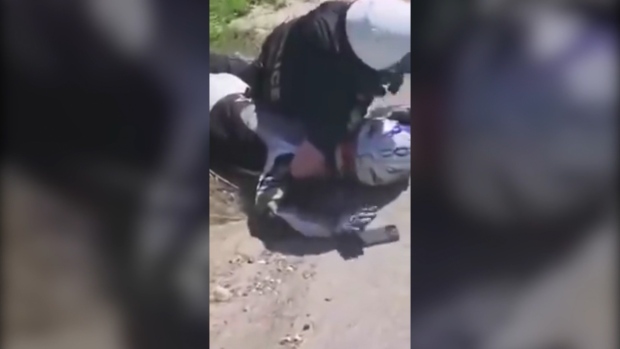 VANCOUVER – Roshan Soroush-Nasab had been out for a motorcycle ride with his friends on Sunday, when a few other bikers they didn’t know joined them. As the group passed the Cassiar tunnel, a policeman turned on their lights and one of the runners the group did not know took off, according to Soroush-Nasab.

“We just stopped and slowed down,” he told CTV News Vancouver. “We thought he was coming back for us.”

When the officer was seen chasing another biker, the group continued.

“(We crossed) the ironworkers’ bridge and he was standing at the end, walking his bike with his baton,” Soroush-Nasab said.

The group stopped, but the other biker they didn’t know ran away.

“(The officer) tried to push him out of his bike in oncoming traffic and he managed to get away,” Soroush-Nasab said. “The officer came in yelling, ‘Turn off your bikes, take out the keys, give me the keys.’ “

At this point, a friend of hers started recording the incident on her cell phone. Soroush-Nasab saw his other friend being handcuffed and went to take off his glove to record on his phone as well, when the officer came up to him.

“I was trying to take off my gloves to press the record button and he walked up to me and said, ‘Put your phone down. And I responded and I said, “Well, I have the right to register you,” said Soroush-Nasab. “He just went from zero to 100 (and) slammed me to the ground.”

In video of the incident Posted on social media, Soroush-Nasab’s friends can be heard shouting, “Why are you stopping him? We can also hear them explain that it was not he who fled.

“At no time was I a threat to him,” Soroush-Nasab said.

The officer tackled Soroush-Nasab to the ground and told the other two motorcyclists to sit where he could see them. Because of the way he was positioned, Soroush-Nasab said, the strap on his helmet made it difficult to breathe.

“I asked him several times to release some of his grip, I guess he couldn’t hear me so I ended up yelling at one point, ‘I’m having trouble breathing’ and he m ‘relaxed a bit,’ Soroush -Nasab said. “He repositioned himself and grabbed my shoulder and kind of held it like that, put a lot of strain on my joint, which now hurts my shoulder because of it.”

He said he had to go to the hospital for x-rays after the incident and is waiting for the results.

In an emailed statement to CTV News, Vancouver Police Department spokesperson Const. Tania Visintin said the group was arrested for speeding. She said a roadside check was carried out, but two of the vehicles did not stop and the officer did not drive after these motorcyclists.

In the video, the officer can be heard saying to Soroush-Nasab: “You shouldn’t have resisted me sir.

“(The video) has been forwarded to our professional standards section,” Visintin said. “PSS has also informed the Office of the Police Complaints Commissioner and as such we are awaiting the next steps. “

Soroush-Nasab was fined for speeding and driving contrary to a license because he only has his “L”. His bicycle was impounded for seven days.

Soroush-Nasab says he will “own” the second ticket, but insists he is not accelerating.

“(The officer) said he had lasered one of our bikes or something, and we were all traveling at the same speed,” he said.

Soroush-Nasab suggested that it may have been one of the other runners who was not in his group that the officer actually saw a speeding ticket.

“After all that was said and done he released me and handed me my ticket and said, ‘I hope you understand the reason why I did this, it was for my own safety because of everything that was going on, ”Soroush-Nasab said. “I guess he’s talking about all the gang shootings that are going on, but that doesn’t make a lot of sense to me. Are you just going to arrest a young man and assume he’s a risk to you?”

He said he thought the officer was remorseful for what had happened, however.

“He said, ‘Dispute the ticket, I will come to court and help you get out (of) the ticket,” Soroush-Nasab said.

But he told CTV News he should never have been thrown to the ground and pinned during a traffic stop. He filed a complaint for the way he was treated.

“It’s humiliating,” he said. “I got thrown and sat on the side of the freeway, hundreds of people driving around shaking their heads like I had done something wrong.”

Soroush-Nasab’s shoulder injury involves his dominant arm, and he said this makes his job as a mechanic a challenge. He is also worried about losing his license because of the speeding ticket.

He said a good start would be to apologize and be reimbursed for towing his bike.

“I grew up supporting the police,” he said. “I actually like them. But, you know, something like that happens and it’s just kind of like, ‘I’m supporting you guys. I’m for you guys. I defend you online. People blame you for doing the right thing and now that’s what I get. ‘”