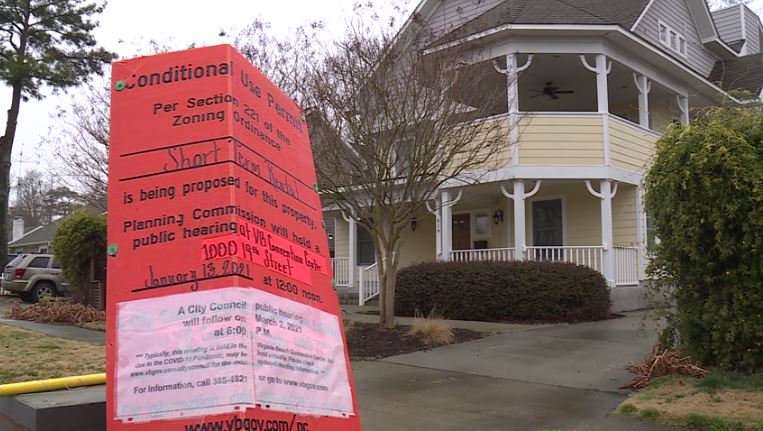 VIRGINIA BEACH, Va. (WAVY) – After many back-and-forths, delays and confusion, Virginia Beach city leaders have embarked on part of a plan to manage short-term rentals such as Airbnbs .

The city council has also approved new regulations on how these short-term rentals will work if approved.

The decision impacts properties that would be rented for less than 30 days at a time using platforms such as Airbnb and Vrbo.

City council members say the changes are not intended to impact those who currently operate short-term rentals with the blessing of the city. Still many of those who are currently renting out their properties using the platforms left the boardroom in disgust on Tuesday night, as applause came from those who say they are in favor of “protecting” their neighborhoods.

The topic of short-term rentals has sparked disagreements between city officials and residents. Many Virginia Beach owners rent their properties to vacationers – and have done so for years – but some neighbors have complained that the frequent flow of strangers is both disruptive and dangerous.

The new rules were offered for the first time in September with the aim of allowing Short Term Rentals (STRs) to operate in areas where vacation rentals have traditionally operated without City Council approval.

Tuesday’s vote came about a week after city council rejected two parts of the proposal before tabling the rest.

The case had also been postponed three weeks earlier. The previous two meetings have seen public comments with people on both sides of the issue spanning several hours.

However, City Councilor John Moss urged City Council to tackle at least part of the plan.

“We won’t be smarter then than today,” Moss said.

All of these rentals are also expected to be subject to new rules prohibiting events, limiting rentals to one rental agreement per week, and capping occupancy to two adults per room.

No speakers were allowed on the matter on Tuesday evening, but many people involved in the subject of short-term rental attended and wore the color red to express their opposition to any new regulations allowing the approval of new applications. .

“You know it’s just a real weight taking us away,” said Nancy Parker, a former city council member who opposed the expansion of short-term rentals. “Neighborhoods are of paramount importance to who we are in the city of Virginia Beach, so I have to say thank you very much to the council members who have stepped forward and done the right thing for us.”

However, Elaine Fekete of the Virginia Beach Short-Term Rental Alliance said the ruling punished people who followed the rules.

The Virginia Beach Short-Term Rental Alliance also released a full statement on Thursday, saying it was disappointed with Tuesday’s outcome.

“The Virginia Beach City Council has banned virtually all new short-term vacation rentals, nearly killing a century-old industry that is flourishing around the world. Council vote will push short-term rentals underground, as the city has shown it is not funded, staffed, or equipped to threaten, fine, or prosecute those who rent their homes without approval from the city.

“Repeated Council votes, motions, alternates, reviews and amendments left the public and frequently Council members confused as to what they were voting for or against. No effort has been made to protect the rights of landlords wishing to rent out their homes, and the plan which once included four superimposed neighborhoods per right now contains none.

“The Council will continue to debate what additional regulations may be imposed on the few existing rental units that have escaped the Council’s ban, while doing nothing to demonstrate how they will cope with the many new unregistered AirBNB-type rentals that are emerging. will undoubtedly expand into the Virginia Beach market. . Council will result in the closure of legal rentals, as unregistered rentals will ignore regulations and costs that Council weighs on those who have always followed the laws.

Obtaining the rights to operate an Airbnb or Vrbo in Virginia Beach is not “a very fair or just process”, some say

Council members have always decided to decide on new general safety rules for all existing short-term rentals. This issue will be revisited in September.

The problem is, it is this ordinance that demands the “grandfather” of all previously approved short-term rentals.

“Are we all illegal now?” I don’t know if they even know what they just went through, ”one man said as he stormed out of the meeting.

The ordinance put to the vote on September 6 communicates that owners who were already operating short-term rentals without a problem and were up to date and registered with the commissioner of the revenue office before July 1, 2018 would be exempt from the ban. As would those who have operated without problem under a conditional use permit.

Those who do not operate “legally” face a fine of up to $ 200 for the first offense and $ 500 for any additional offense.

The issue is far from over, as city council voted at the end of its meeting to reconsider allowing short-term rentals in the North End area and Oceanfront resort area without the 75 membership for hundred of owners.

Stay with WAVY.com for updates.

Get the free WAVY News app, available for download in the App Store and google play, to stay up to date with all your local news, weather and sports, live TV news and other live events.