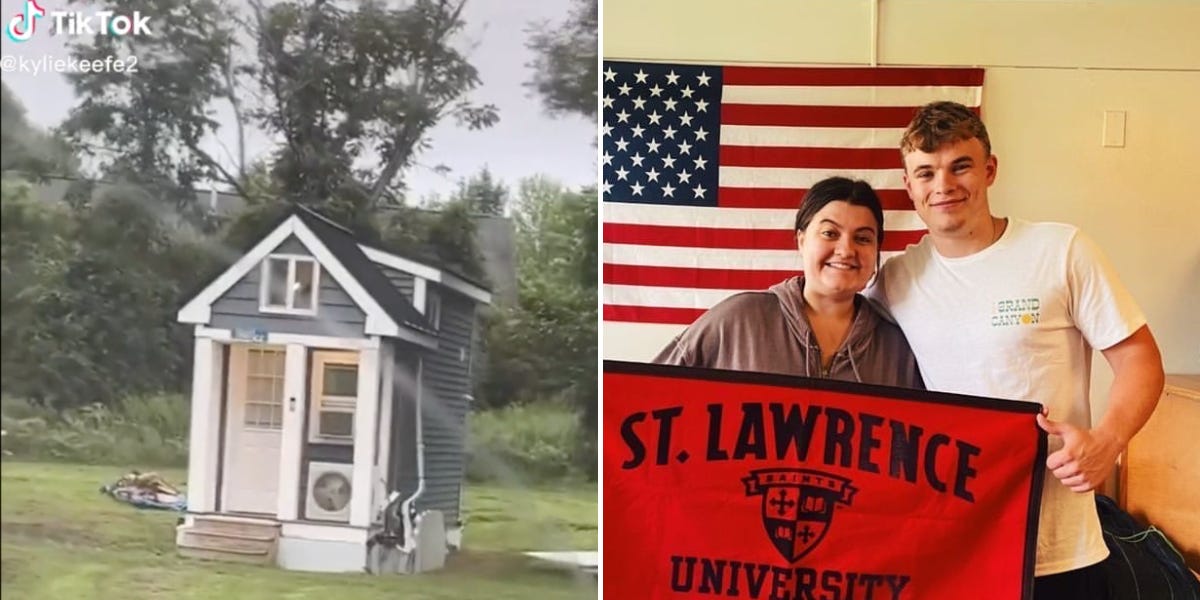 When Kylie Keefe and her brother Aidan Keefe pulled up to the house their dad had booked for a family trip to the Adirondacks, they were in disbelief.

It is because the vacation rental their dad booked on Vrbo was not a traditional sized house. Instead, it was a tiny house – a very, very small house, measuring only 144 square feet, plus a 96 square foot loft.

Kylie told Insider that she immediately knew there was no way she, her brother, stepmother, father and two labradoodle dogs would fit into the vacation location.

In shock, all Kylie and her brother could do was laugh. They took some videos of the funny achievement, and Kylie posted it on her TikTok account @kyliekeefe2 Thursday. Within a day, the the video has gained over 26 million views.

Here’s what happened when they showed up.

Four members of the Keefe family were traveling from Massachusetts to St. Lawrence University in Canton, New York, to drop Aidan off at the university. The family planned to spend two nights in Canton to settle Aidan.

In preparation, Kylie and Aidan’s father, JJ, looked for a hotel room. When the neighboring Best Western was full, he turned to Vrbo where he found a listing for a tiny house that had “a queen bed in the attic and 2 sleeper chairs downstairs.”

With three beds mentioned, Kylie’s dad assumed there would be enough space for four people, Kylie said. At the time of writing, the Vrbo listing said there was room for three people.

Kylie’s dad booked the tiny house for two nights for $140.

On the day of the ride, Kylie and Aidan drove in one car, and JJ and Kylie’s mother-in-law, Erika, was in another. When Kylie and Aidan first stopped by the vacation rental, they were amazed at how small it was.

“My dad pulled up behind us and his first reaction was exactly the same,” she said. “The first thing he said as he got out of the car was, ‘I’ll find you a hotel room.'”

Luckily, the neighboring Best Western ended up having a vacancy, so Kylie and her brother stayed there while Kylie’s dad and stepmom shared the tiny house.

But before the family separated, they visited the small house together.

When Kylie first walked in, she saw two pull-out chairs and an ottoman. Nearby was a ladder that led to a raised bed. Behind the living room were the kitchenette and the bathroom of the house.

With all four family members on the lower level of the house, Kylie said there was no room to roam.

Kylie shared her and her brother’s initial reaction to seeing the tiny house on TikTok. Thousands of reviewers have requested a tour of the 240 square foot home.

Before Kylie could share inside the house, the Vrbo host saw her video and stepped in to give her own tour under the account @actinyhouses. The Tiny House host says Kylie’s dad booked the Tiny House for two guests. Vrbo did not immediately respond to Insider’s request for comment.

Kylie said she thought the little house was cute and never laughed at the ad.

“I laughed at my dad’s mistake in thinking that all four of us and two dogs could sleep in this house,” she said.