This is not an article that complains about tedious airport delays, overloaded luggage and overzealous customs officers. Today I will attempt to chronicle a 4,700 mile road trip in just 1,200 words.

Dover of North Wales is a hike in itself, but easily doable in six to eight hours. It got a bit worrying when I realized diesel was getting hard to come by near the port. This was caused by higher prices in France, prompting motorists and truckers to refuel in the UK. This did not bode well when we also discovered shortages in France. But we overcame these issues by restocking a little and often, making the most of the forecourts with ample supplies.

At the end of March and beginning of April (2022), we made our way through snowy and unusually cold northern France for the season. A southbound route that led to Rouen, Le Mans, Tours and Poitiers where we finally ran out of breath on DAY-1. Stopping at a nearby campsite, our surprisingly comfortable airbed-equipped station wagon provided impromptu accommodation after being abandoned by an Airbnb host. We woke up to a cool, freezing morning by the slowly meandering Vienne River. A very pleasant experience.

Tired from two days of travel, our next stop was a simple hop and a hop to Angouleme where we had booked another Airbnb close to central amenities. It’s finally time for some serious wine tasting and a taste of France. This followed an afternoon visit to the beautiful (and now sweet) town of Cognac with its picturesque Grand’ Place, endless narrow medieval streets and splendid flower arrangements. Cognac is a bustling little town. It is wonderfully cool and therefore a real pleasure to visit being in the heart of the lush and fertile region of Nouvelle-Aquitaine.

With the nose of the car pointing squarely towards the mighty Pyrenees and the Iberian Peninsula beyond, coordinates were set for Toulouse via the Dordogne and the magnificent city of Périgueux, home to the Saint-Front Cathedral with its five domes. It was another perfect place to enjoy another light lunch, sample locally produced foie gras, marvel at ornate and extremely expensive cakes before… more sightseeing.

Toulouse was not on our radar as the objective was to attack the Pyrenees the next day. So we continued to drive, hoping to find a hotel south of Toulouse. We ended up using a booking app to find nearby accommodation. We were doing! It was a room in a small family bungalow. To say it was comfortable is fair. Our room was literally right next to the family living room with a shared bathroom to boot. Luckily our hosts were friendly enough and clearly not used to hosting last minute visitors like us. It just seemed a little ‘familiar’ to those of us with a British disposition. But for an authentic French experience – unbeatable!

After a somewhat restless night’s sleep, dawn heralded a visit to a nearby local bakery where a continental breakfast was enjoyed in the company of an elderly but very French owner who spoke excellent English. It’s time to head for the snow-capped splendor of the high Pyrenees. If we played our cards right, Barcelona beckoned us.

The ride over the snow capped peaks was nothing if not quite spectacular. Some of the more remote French/Spanish backcountry roads are somewhat hairy and may not be for the faint-hearted. But, fortune smiles on the brave and so the most spectacular views would be unveiled from remote passes with narrow road tunnels carved into the ancient hills. 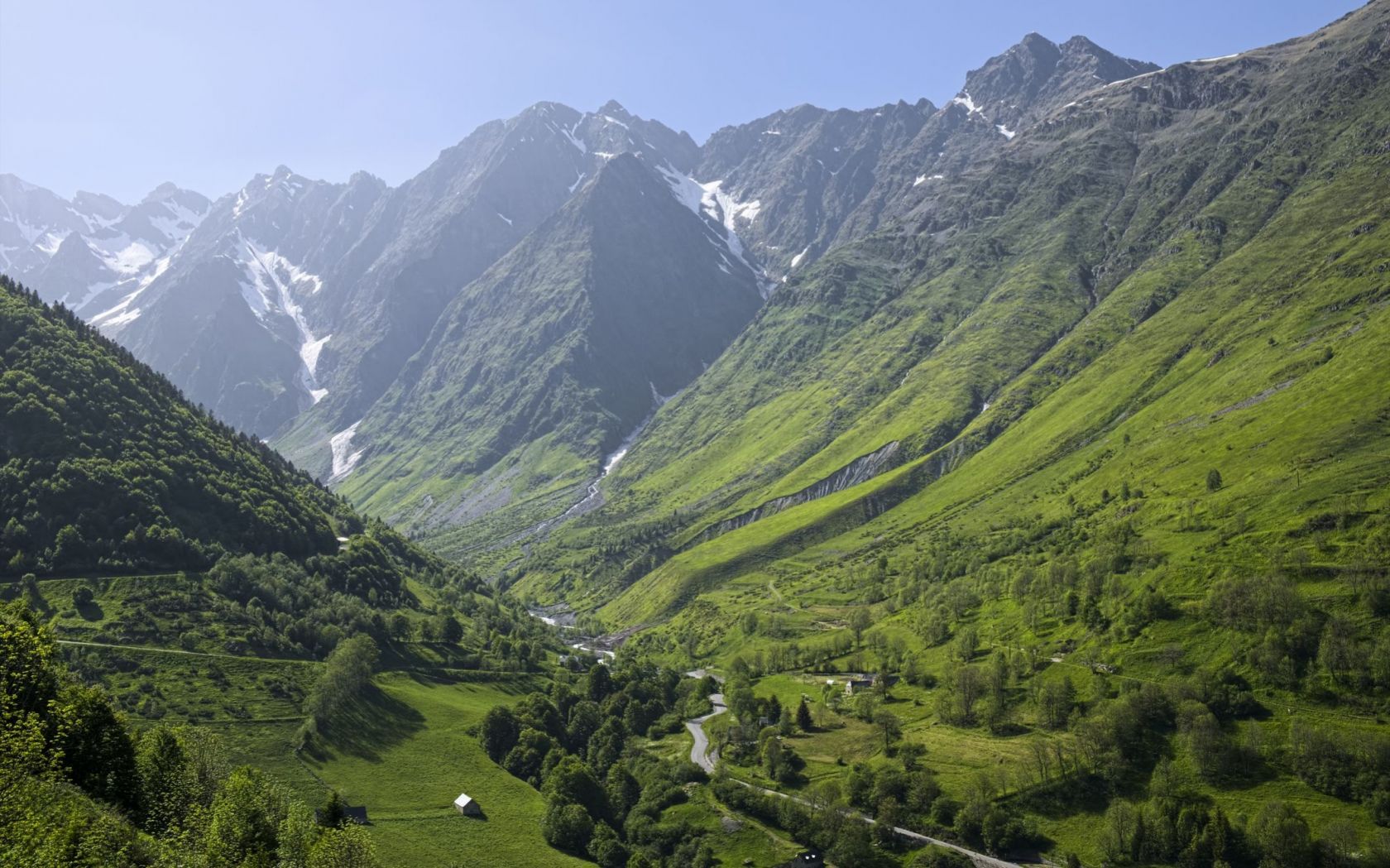 The architecture and the general atmosphere are typically alpine in these regions. Pinch yourself, because Barcelona is hiding very close. The remoteness, peace and quiet will soon be replaced by the bustle of a vibrant European city.

Barcelona sights are just awesome. It’s a huge city but we managed to cover all the main sights from our city center hotel, just off Las Ramblas. Tip: if you have a big enough car, avoid underground car parks. They are built in the absolute bowels of the city. Access is NOT easy. Going out, even trickier! It’s 25€ to scratch your car. Luckily, I got away with it. Only. 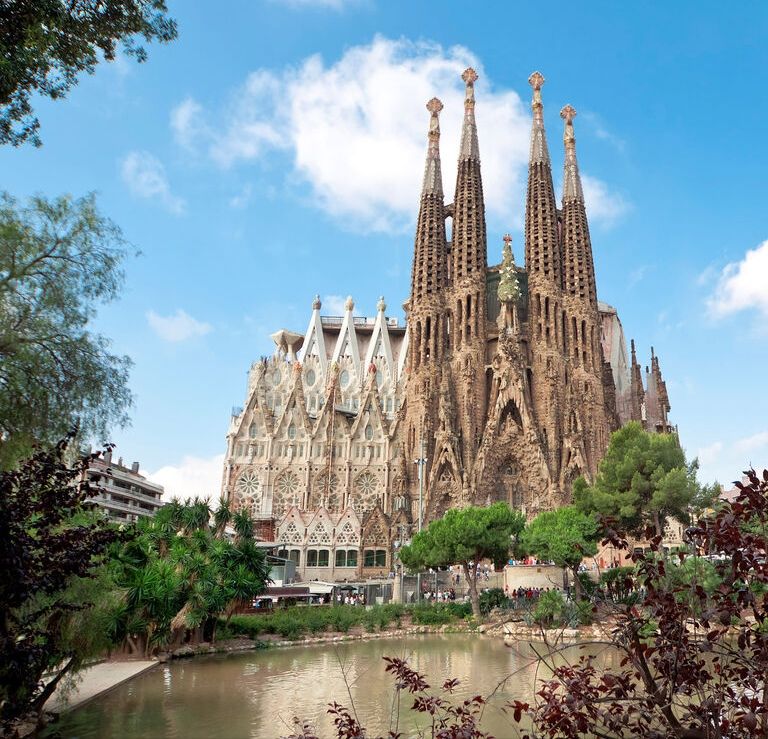 After a hectic but oddly relaxing few days in bustling Barcelona, ​​we went slightly off-road, skirting the Spanish Costas until we came to a small seaside town called Benicarló. We chose to stay in the larger and more picturesque neighboring town of Pêniscola, with its fabulous hilltop castle overlooking the sunny bay. 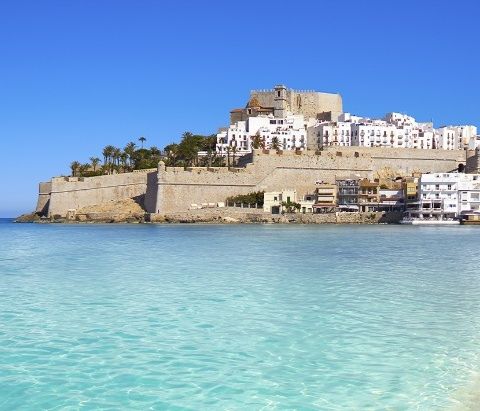 From there it was a long drive past Valência towards Benidorm. Surely all the oranges in the world are grown around Valencia? Plantations stretch from horizon to horizon, miles and miles of oranges. I thought there were a lot of them in Portugal but that was on another level.

I had never been to Benidorm. For me, it’s about letting go of all the clichés. This is a resort that has everything for everyone. You can eat whatever your heart desires, from cheap and happy food to top-tier cuisine. You can have Tex-Mex, Tandoori or Tapas. The choice is yours. And Benidorm is much prettier than I could have imagined. The views from Benidorm Castle at the top of the old town (across ‘Tapas Alley’) are truly impressive, especially when it’s all lit up at night. We will go back!

From Benidorm we headed to Seville for Easter Holy Week celebrations where some 50,000 people donned traditional dresses to parade in 58 organized processions where ‘costaleros’ carry huge pasos (religious statues) lit at the candles on their shoulders. Fascinating show!

Portugal was now clearly in our sights. From the beautiful beaches of Huelva, we quickly crossed the Guadiana Bridge to spend some relaxing time in the Algarve sun. Based in Quarteira, we spent several days on the southern flanks of Portugal before heading north to Lisbon, Ericeira, Sintra, Cascais, Mafra and all my favorite haunts. Then it was north to a very windy San Martinho do Porto, Nazaré and Aveiro before heading to northern Spain and the picturesque Basque Country.

Our stay in the beautiful seaside resort of San Sebastián, where “pinchos” trump tapas and people speak their own language, was far too short. But at least we still had the French Basque region to look forward to where we spent very pleasant days close to the superb Biarritz, Bayonne, Irun and St Jean-de-Luz.

Our last days of this month-long getaway were spent in the majestic city of Bordeaux where modern meets classic in an extraordinary fusion of styles. A vast network of narrow streets and alleyways reveals a plethora of hidden bars and restaurants to suit all tastes. There is also a very useful modern tram system which connects all the main areas of the city, the parks, the large riverside esplanade and various key suburbs, making Bordeaux remarkably easy to navigate.

So that’s how we did Portugal the hard way. It was also the fun way and is therefore highly recommended!

Airbnb’s new booking policy is smart. How the company advertised it is awesome

The beautiful French city no one has heard of