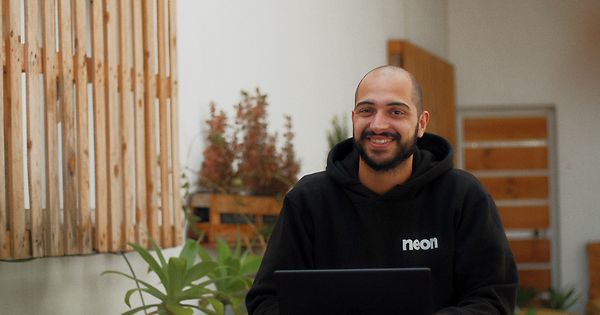 When the office is at the beach

When the office is at the beach

Karim Youssef, one of the founders of the Luxembourg marketing agency Neon, spends part of his year working from Lisbon.

Some of the legions used to working all day on their laptops leave Luxembourg for places closer to the cultures, parents or nature that calls them.

Luxembourgish Karim Youssef, one of the founders of the Neon marketing agency, is part of the wave of so-called digital nomads that is spreading across the world. Youssef alternates between Luxembourg and Lisbon as he runs the company that was created from the start to allow employees some flexibility as long as they can connect through a fast internet service.

“For most jobs in online marketing, you don’t always have to be physically present,” Youssef said. “We don’t care when or where a colleague does their job. As long as deadlines are met and quality is there, that’s none of our business. ”

In addition to spending part of the year with his girlfriend in Lisbon, he worked on the beach on the Portuguese Algarve coast, in Amsterdam and Berlin.

The experience of running businesses during Covid-19 lockdowns has made remote working more accepted and common, Youssef said.

“Before Covid, many didn’t even know what Zoom or Teams was,” he said. “Sometimes we had to justify ourselves a bit when we weren’t there for client appointments. Everyone’s doing it now.”

Others are joining the trend.

Home-sharing platform Airbnb said its customers who rent apartments for four weeks or more nearly doubled between 2019 and early 2021. About one in nine long-term renters said they did not have a permanent home, said indicated the company.

The number of Americans who described themselves as seconded from the office increased by nearly 50% from 2019, to a total of nearly 11 million workers, according to a study by consultancy firm MBO Partners. While freelancers and independent service providers have dominated so far, the number of digital nomads from traditional professions has nearly doubled, MBO said.

“A lot of people come to us from marketing, graphic designers, programmers and journalists,” said Magdalena Hermann, who rents coworking spaces in the Moroccan fishing village of Taghazout near Agadir. “But recently we’ve had whole new professional groups. For example, there are lawyers, archaeologists, government officials or even someone from the European Central Bank. “

Hermann customers pay between 25 and 38 € per day for a single room, breakfast and use of the workplace. Many stay one to three months, she said. About half of Hermann’s guests work remotely and some no longer have a permanent address, she said.

Although it was only able to fully reopen its operations two months ago after closures and travel restrictions, requests for vacancies have doubled and she expects strong demand to continue.

Countries whose tourism incomes have plummeted due to the pandemic have also seized the spending potential of digital nomads. Estonia last year became one of the first countries to introduce a visa specifically to attract them and there are now similar programs in Georgia, Bahamas and Iceland. Greece promises tax breaks for digital migrants.

Specialized agencies have sprung up to help laptop workers deal with challenges such as taxes, health insurance, and retirement payments. In February, the regional government of the Portuguese island of Madeira even launched a village dedicated to drawing digital nomads. Since then, 9,500 registrations have been received from 108 different countries, said project manager Micaela Vieira.

Maša Nobilo stayed in the village of Madeira for two months. A former translator for the European Parliament, Nobilo created her own company in Luxembourg a few years ago as a “sleep coach” who advises clients on how to sleep better. Since she mainly works online, she tests life live wherever you want.

She accepts the criticism that the nomadic lifestyle can prevent personal relationships from becoming deeper than the superficial contact of people coming and going. Villages where expatriates congregate can also isolate distant workers from their host countries, Nobilo said.

“It can become a bubble disconnected from the local culture. When people only stay for a few months, it is very difficult to learn the language or get involved in local community activities, ”she said.

Yuen: How to travel with just hand luggage – and some tips if you can’t