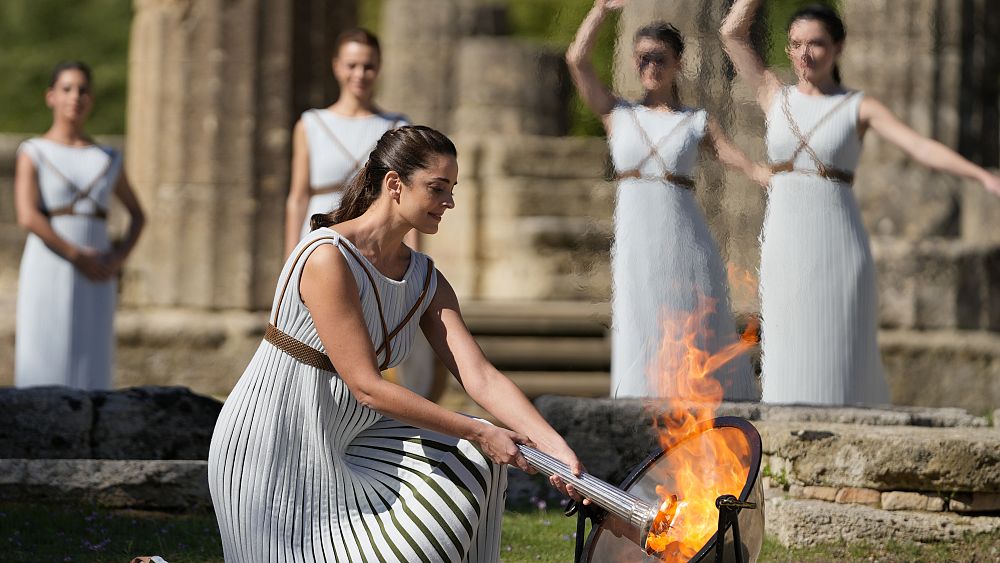 On its journey to the French capital for the Paris 2024 Summer Olympics, the Olympic torch will not pass through Haute-Loire. The glorious Olympic flame, local authorities say, is simply too expensive.

Haute-Loire is not the first French department to turn its back on this emblematic symbol of the Games. Seven others – Indre-et-Loire, Lot-et-Garonne, Creuse, Haute-Vienne, Loire-Atlantique, Côtes-d’Armor and Orne – have already announced that they will not participate in the traditional Olympic torch relay.

The departments were asked to pay 150,000 euros (180,000 euros including tax) to organize the passing of the torch on their territories, a sum that the local authorities described as “exorbitant”.

The same amount of money has been requested from all relevant French departments, regardless of their available sports budgets. What the vice-president of Haute-Vienne in charge of sports, Thierry Miguel, said he was “shocked”.

These departments prefer to spend their limited budget on real sporting events. Some have already done so.

In 2021, the Haute-Loire sports budget was 1.6 million euros. The department has already spent part of this budget to host the 2022 edition of the Six Days of Enduro, an international motorcycle race, this summer.

What is the Olympic Torch Relay and why is it important for France?

The tradition of the torch relay is fairly new in the context of the Olympic Games. It was only introduced during the infamous 1936 “Nazi Olympics” in Berlin.

Despite popular belief, the Olympic flame does not burn in perpetuity. In fact, the torch is only lit a few months before each Olympic Games in Olympia, the Greek city where the ancient Games were originally held every four years.

From there, the flame is carried to the city hosting the Olympics on foot, traditionally by runners. In the case of Paris 2024, the torch will be transported from Greece to France by boat to make the flame’s journey more sustainable.

The last runner to complete the relay is the one millions will see entering the stadium to light the Olympic cauldron during the opening ceremony of the Games.

It’s a highly symbolic gesture that echoes the theft of fire by the titan god Prometheus from Zeus. Prometheus’ gift of the flame to mankind is considered to mark the beginning of civilization. The torch also mimics the sacred fires traditionally burning in many ancient Greek shrines, including that of Olympia.

For France, the Olympic torch relay is also an opportunity to make itself known to the world.

According to the organizersthe relay “will offer a unique opportunity to highlight the regions of France, its heritage and its know-how by traveling through the towns, villages and emblematic places of the torch which will take advantage of the focus of the Games to reveal themselves to the world public.”

In France’s ambitious plans, the torch relay will also set foot in at least one of the country’s overseas territories (which has yet to be decided).

Why is the Olympic flame so expensive?

Running while holding a lit torch seems quite difficult. But doing it across borders, bustling cities, and busy roads is a logistical nightmare — and expensive to boot.

When London hosted the Summer Olympics in 2012, the country spent £9 billion to stage the Games. Of this crazy sum, 6 million was spent on the torch relay alone.

Different council authorities were asked to spend different amounts for the flame to pass through their areas (unlike their French counterparts), but on average they each spent around £40,000, according to figures obtained by the UK Press Association in under the Freedom of Information Act. Other councils spent over £200,000.

According to local authorities, most of this money was spent on ensuring the safe passage of the flame, closing roads and deploying thousands of street marshals setting up barriers and managing curious crowds.

Then there was the cost of the celebrations and the cleanup needed afterwards.

France is around 2.3 times larger than the UK, suggesting the cost of the torch relay could be more than double that paid by UK local authorities in 2012.

What is the benefit of hosting the Olympics?

The refusal of various French departments to participate in the Olympic torch relay reflects a deeper problem that is emerging in the international landscape.

The cost of hosting the Olympics has skyrocketed in recent years, with no real economic benefits for countries that agree to host such a mega-event.

Soaring costs have led to fewer and fewer countries applying as Olympic host candidates, an issue that has prompted the International Olympic Committee to call for a reform of the host city selection process.

Will the 2024 Olympic Torch Relay continue?

While more French departments may turn their backs on the Olympic flame, the Paris 2024 Olympics organizing committee, Cojo, said a “very large majority of departments have already hosted” the relay.

According to Cojo, the 150,000 euros requested from the departments were so that the flame could cross “the maximum number of territories” on its way to Paris.

But they clarified that the relay is funded “largely by the committee and its partners” and will continue no matter what.

What Airbnb Hosts Should Consider Before Renting a Property